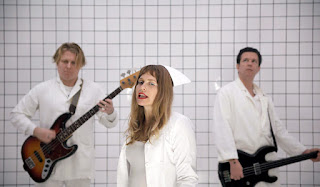 The C.I.A.’s Surgery Channel is ripe with straightforward conviction. The trio made up of Denée & Ty Segall and Emmett Kelly have constructed a world where everything is piercing and pinpointed. Every word brings confrontation – The C.I.A. make you question what could be happening here…or what they’re after.

Ahead of its yesterdays release, they revealed a new video and single “Bubble” — a story of anxious desire. We will be consumed by what we must consume. Restraint backfires and drives a person to madness. Or maybe that’s just what they want you to think. It feels as though Denée (vocals, lyrics) is whispering directly in your ear, amplified by the suspense of tick-tocking drum machine beats. Ty (bass, percussion, back up vocals) and Emmett (bass, synth, back up vocals) paint a jarring and dissonant landscape behind Denée’s story.  Words are rhythm at The C.I.A.

The C.I.A. is communicating from an electrified, pulsating, metallic playpen that wants you to strut. Surgery Channel shows punks a new way to move while remaining loyal to the traditions of catharsis and social commentary.

Ty and Emmett’s basses could easily be swapped for bone drills and you might not be able to tell the difference. Emmett’s modular synth envisions an environment reminiscent of the instrument itself, a mess of wires and pulsing red lights. Ty’s subtle use of electronic and analog percussion fluctuates between the sound of a metal tray hitting the floor, and the swish of an ultrasound scan. At times, it projects the feeling of being probed and investigated. You could assume this reality has been lived by those at The C.I.A., though most listeners could only fear it. So... just how little of this portrayal is solely a work of imagination? 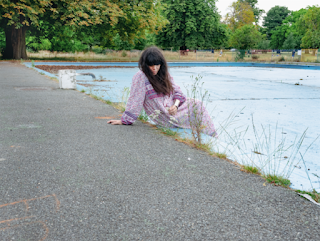 Acclaimed singer-songwriter Emma Tricca has announced the release of her new album Aspirin Sun due out April 7th via Bella Union and is available to preorder here. To celebrate the occasion, Tricca has shared a colorful and captivating video for first single “King Blixa” directed by Francesco Cabras. Commenting on the track Tricca says: “Since childhood I have always been fascinated by folk stories. From Italo Calvino to Homer to British and French Troubadour ballads. The magical element of turning the impossible into the possible is what inspired this poem/song - like in the line, I would ask the sailors to break their solitude.”

“It felt like I was driving through tunnels,” Emma Tricca says of her fourth album – her first for Bella Union. A phosphorescent panorama of undulating color, shape and sound.

As with any transformation, it is this sense of movement that underpins Aspirin Sun and its bold new form, ebbing and flowing, continually unfurling. The tunnels led the Italian-born, London-based singer-songwriter towards something expansive and far-reaching: an entirely new and experimental collection of songs. But they also drew her closer to her late father, and her memories of him driving them both in his small white Fiat, darting through the Alps and whizzing through darkened passageways, where shafts of light flickered ahead of them in the distance.

Light and shade; past and future; love and loss. “I was in uncharted territory trying to understand what was happening to me,” Tricca says. In the winter of 2018, only months after her mystical third album St. Peter was released, her father died, submerging her in a subaqueous world of grief. “I think that the loss really informed the tunes a lot,” she muses. And the tunes quickly emerged. Tricca decided to spend a few months in New York during the summer of 2019 – and started recording Aspirin Sun in her long-time collaborator Steve Shelley’s studio. 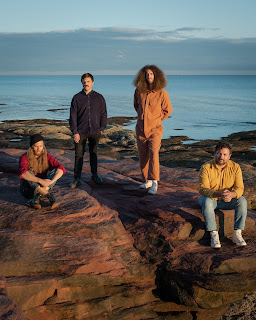 Villages - Play The Fiddle All Night.

"The song was written after reflecting on the traditional poem ‘The Dark Island,’” says Villages, made up of members Matt Ellis, Travis Ellis, Jon Pearo and Archie Rankin. “Stirring up thoughts of mortality and what of our home on Cape Breton Island would be pined for when the time comes. The song presented itself very quickly and we finished it only a few days before we were scheduled to record. There was a striking similarity in themes carried in both the poem and our tracklist, so it ultimately gave namesake to the album. The song immediately felt vital to the record and given the spontaneity of it all, it was one of the more exciting experiences in songwriting that we’ve had.”

“Play the Fiddle All Night” follows the uplifting “Love Will Live On,” which arrived with a cinematic music video and was met with acclaim from outlets including Earmilk and Atwood Magazine, who said that the track “emphasizes the charm of simple living.” Over the holidays, the band treated fans to their jubilant holiday original “Merry Christmas (From the Dowie Dens)”.

Villages’ forthcoming album Dark Island finds them penning a euphoric and reverent love letter to their native Cape Breton Island in Nova Scotia. The album has already garnered support from the CBC who said, “With Dark Island, the band can easily claim its own folk niche,” and Music Connection Magazine who hailed it as "a masterpiece, delivering a combination of gently harmonized vocals and maritime-shanty melodies alongside lilting instrumentals ... a soothing ethereal experience.” Produced by JUNO-winning composer and producer Joshua Van Tassel (David Myles, Great Lake Swimmers, Fortunate Ones), Dark Island results in a type of Celtic music that respects its heritage while taking sonic chances. These musical risks can be credited to early influences like indie rockers Teenage Fanclub and Belle and Sebastian, as well as their previous incarnation as acclaimed indie-rock outfit Mardeen. 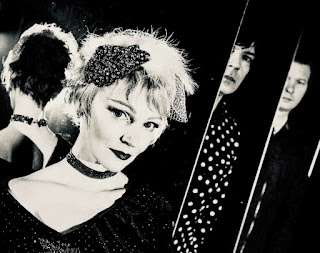 The legendary indiepop band The Primitives debuted the b-side "Panic" from their new 'Don't Know Where to Start' EP. As we enter the winter season, the weather is turning cooler and grayer, but UK’s The Primitives have something to warm your heart and get your feet moving. HHBTM is proud to present the band’s latest single and first new material in five years.

"Don’t Know Where To Start" is a three minute blast of pure pop perfection; with its organ-driven melody and vocalist Tracy Tracy’s superb singing, we’re equally reminded of the late Ronnie Spector and The Muffs’ Kim Shattuck. In other words, "Don’t Know Where To Start" ticks all the Primitives’ pop charm boxes for those who know. It’s followed by the moody punk edge of "Till I’m Alive," sung by Paul Court. Also included is a live recording of "Panic," taken from the band’s 2017 Part Time Punks session. The single closes with a fuzzy acoustic version of "Don’t Know Where To Start."

The Primitives won hearts and minds in 1988 with their debut album Lovely and its Top Ten UK hit single, "Crash." They would have more charting singles over the course of the next four years, releasing two further albums before disbanding in 1992.They reformed in 2009 and have since released two albums and a handful of singles.