A Trip With The Beatles - Part One 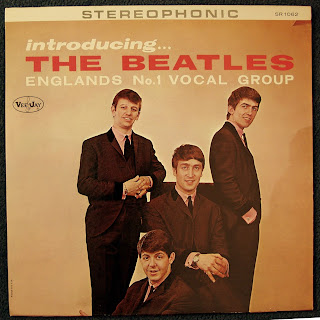 My first recollection of The Beatles, was watching them perform on the BBC probably in October 1963 at the London Palladium (no I do not have a fantastic memory, its a calculated guess, they were on the bill, and it was the sort of programme my parents would have had on).

Keeping it simple, I have always liked the Beatles, if ever there was an example of popular music that stands the test of time, its them.

In this occasional series, I hope to share some of their rarities, and in doing so probably only just scratch the surface.

There are so many Beatles boots around it's a job to know where to start. In recent years however digital technology has allowed the ardent fan, not only to circulate the material more easily, but to clean up the sound quality, and in some cases, do such a fantastic job, it can rival 'officially' released material.

I am going to ignore any chronological order, to support the fact my collection is growing as I type.

However let's start close after success had come their way.

From Mythology - Volume One - CD One - comes track one. Not to be mistaken with The Anthology series released by the Beatles, and shown on TV at the same time, Mythology is a bootleg series, that dug a little deeper.

On the downside rather than share the material, those behind Mythology were trying to make a profit without royalties. However in more recent times, the collection has surfaced free on the web.

To purchase The Beatles - White Album or check out similar Beatles Cd's click here, or on the picture above.
The Beatles