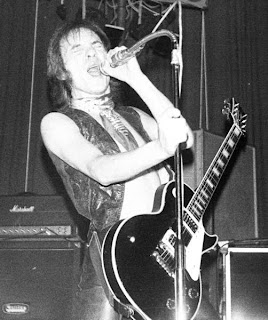 I try and share really good quality boots, (unless the material is very collectible) I am really pleased with the sheer audio quality of this one.

This particular bootleg, is mainly known as Route 66, live in LA and PA.

Humble Pie originally formed in 1969, and had a large and loyal fan base right through to calling it a day in 1975.

Two albums were released 'On To Victory', and 'Go For The Throat', however the 'second' Humble Pie called it a day by 1982.

The tour(s) supporting these two albums became known as the 'Route 66' era, and despite the short lived reformation, the band were really good in concert, probably because Humble Pie were always a live band first.

There has been a problem downloading the above files for some visitors Please try this full zip file below, if you have had a problem.

I tried to download soon after first seeing notice of this posting on TotallyFuzzy. Even after several tries, Mediafire would not start the download for part one. Perhaps it is temporary.

SuddenValleyLarry said…
Part 1 is fixed. Thanks for the post. Great live concert.
3 September 2007 at 17:36