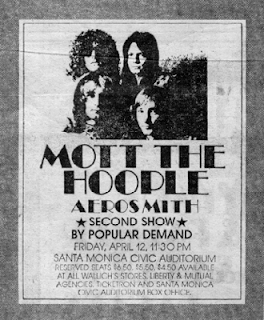 Set: Not complete. This version of the show was edited to accommodate the Cd's running time, and omits the Jupiter intro, Here Comes The Queen (with guitarist Ariel Bender on vocals) and Born Late 58 (with bassist Overend Watts on vocals).

Links: The 'official' site recently developed for the bands 40th anniversary London gigs scheduled (and sold out) for October 2009, has a great selection of other links, and of course is of interest in it's own right. - Just click HERE. Wikipedia history HERE.

Comments: This has been copied from a Mott The Hoople fan site.

The show (the second that day!) finds Ian struggling with bronchitis, but this is only noticeable at the start of the set. Sucker bristles with menace as always, and the Roll Away The Stone/Sweet Jane coupling is always a delight. Hymn For The Dudes is another delight before the band launch into Marionette - brutal on record and visually totally stunning. They then crank up the octane even more for the medley Drivin' Sister/Crash Street Kidds/Violence.

The same article goes on to recommend this concert as the best bootleg available for Mott The Hoople, in terms of sound quality and content.

Anonymous said…
Thanks Mike, This is a great sounding boot and I want to say thanks for sharing this and all the work you do on your blog. "Q"
24 February 2009 at 03:55

Anything Should Happen said…
Hope you don't mind the heads up.

I've popped quite a few Hunter / Mott live stuff on my blog.

JohnnyCanRock said…
I will be flying to London from Vancouver for the reunion shows in October. You can follow my adventures in my blog, "Mottober"

Unknown said…
I saw this show and as you said Marionette was visually stunning. Not impressed by Mick Jagger wannabe Steven Tyler but time proved me wrong, I guess.
7 February 2018 at 22:26