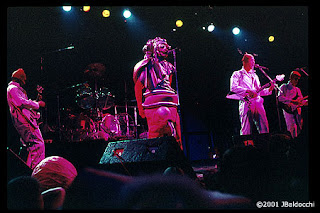 My first memories of The Tubes, was hearing Radio Caroline play 'Don't Touch Me There' back in 1976, at a time when BBC Radio & the UK's fledgling commercial stations bent over backwards to ban anything that was remotely risque, or questionable... well anything!

A number of The Tubes band members were students at the same high school in Phoenix, Arizona, as Alice Cooper, what were they putting in the water back there and then?

This recording was made at a time when The Tubes were arguably moving towards their first creative peak, which was both visual and musical.

This then is The Tubes live at the Shrine Auditorium, Los Angeles, USA, on the 26th June 1976.

Source: Tricky one this. I thought it was definitely an expanded version of a King Biscuit Flower Hour recording, however their site partly contradicts this, any how it's a professionally mixed recording.

Set: Fifty minutes - predominately the latter part of the concert.

Comments: This bootleg recording originally circulated on a vinyl album entitled 'Darted In My Own Armchair' it was subsequently released on CD in Italy in 1991 as 'The Tubes In Concert 1976'.

The Intro to 'Love Will Keep Us Together' is the Captain Beefheart tune 'Gimme Dat Harp' featuring Roger on blues harp.

The band released their second album 'Young and Rich' in 1976, and following a one month residency at Bimbos, San Francisco, continued with 'The Tubes World Tour 1976'.

RevolutionaryBum said…
What the saying when it rains...Play the TUBES ? So strange to see nothing of this band in blog ville the suddenly bam bam first a 7" of What do you Want from Life then the great Live 2 disc Lp and now this, which is the coolest of the bunch since you just don't come across boots of the TUBES everyday well at least I haven't... So thanks very much for the post... "My Name is Johnny Bugger...and these guys are Dirt Boxes" F.W.
14 April 2009 at 06:05