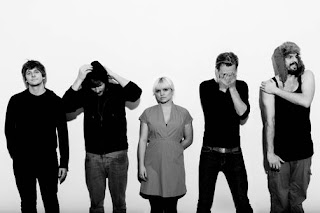 Here's a band I really do like and new little about until those very nice folk at Paper Garden Records sent me a copy of their current album, and am I glad they did! I reckon a lot of people are gonna be 'getting into this band' in 2010, and those already in the know are probably feeling rather smug.

Alcoholic Faith Mission are from Copenhagen however started out in Brooklyn in 2006. Whether it is the contradictory band name, the band’s multinational conception, or just the creation of eerily beautiful music, Copenhagen’s Alcoholic Faith Mission have already proved their worth in Europe with coverage in NME, AOL UK and more in addition to consistently selling out high-profile shows across the European continent.

Listen:
'We All Have Our Shortcomings'

Bio: Alcoholic Faith Mission started in Brooklyn, NY in 2006. The apprentices of dejection, Thorben Seierø Jensen and Sune Sølund, were wandering around in the raw wintery-streets, shooting the breeze and brushing on alcoholism when suddenly before them was big neon cross. This was a holy congregation called Apostolic Faith Mission. “It’s just like booze is to the alcoholic, they thought. A true mission to withstand an empty existence; an Alcoholic Faith Mission.

Three months later the duo’s underplayed and dogmatic debut, Misery Loves Company, was ready.
Dogma’s for the album, which was recorded in a small bedroom in Copenhagen, was that recordings had to take place at night, lit by only candles and always under the influence of alcohol.

Two years later they went back to Brooklyn to seclude themselves in an old factory loft at 421 Wythe Avenue and came up with an alternative active creation process for the new album – perhaps one that was a bit easier on the liver. They tried on a selection of straightjackets for inspiration. Everything used to make the music had to be found within the loft’s four walls – creating some obscure, yet fitting sounds such as that of dictionaries beating each other to become an electronically muted bass drum.

This way of working turned into their second album; named after the street where they lived on – 421 Wythe Avenue
2010FM (Music and More)