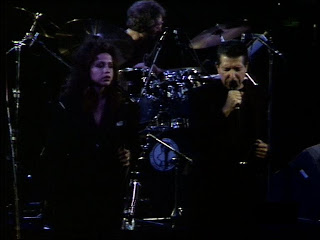 This is Leonard Cohen live at the Royal Albert Hall, London, England back on the 30th May 1988.

The performance was recorded by the BBC (from their own soundboard) but never subsequently broadcast.

In 1987, Jennifer Warnes's tribute album Famous Blue Raincoat helped restore Leonard Cohen's career in the USA and the following year he released 'I'm Your Man', which marked a drastic change in his music. Synthesizers ruled the album and Leonard Cohen's lyrics included more social commentary and dark humour. It was Leonard Cohen's most acclaimed and popular since Songs of Leonard Cohen. "First We Take Manhattan" and the title song have become two of his most popular songs.

Leonard Cohen is set to be honored with a Grammy Lifetime Achievement Award in 2010. His recent touring has seen a significant rekindling of interest in his wonderful music, and his performances have been sublime. Two new live albums are now available and worth checking out. One is from his seminal performance at the Isle Of Wight festival in 1970, the other from his recent tour (Live In London 2009).

Axe Victim said…
Merry Christmas From AXE FM. Thanks for all the good music and be sure to catch the AXE FM Christmas Show over on my blog.
23 December 2009 at 14:56

grumgjv said…
Excellent, thank you. One question, Hallelujah seems to stop mid-song. Is that me, or a problem with the original file?
Best wishes for the festive season.
26 December 2009 at 18:22

Anonymous said…
Its a problem with the original file, sorry the notes that came with this recording did mention a problem & I forgot to add this detail.

grumgjv said…
No problem, thanks for the info, I can stop worrying that I've done something weird! Other than that glitch, it's really excellent. Thanks.
30 December 2009 at 20:41