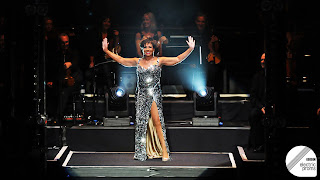 This is Dame Shirley Veronica Bassey, performing live with the BBC Concert Orchestra at the Electric Proms, Roundhouse London, England on the 23rd October 2009.

One of the aims of Beehive Candy has been to provide variety and diversity in musical styles and genres. This has ensured that those who contribute tend to listen to music they might otherwise just pass by. Shirley Bassey is a superb live performer and this concert both reminds us of some of her wonderful hits across decades and that really good artists can appeal to audiences across different generations.

It was announced in July 2009 that Shirley Bassey was recording a new album, with David Arnold as producer. By September 2009 artists who had written songs for the album included Manic Street Preachers, Gary Barlow, KT Tunstall, Pet Shop Boys, Kaiser Chiefs, John Barry and Don Black. The 11-track album, entitled The Performance, was released on the 9th November 2009.

Shirley Bassey headlined at the BBC Electric Proms in her only full live set of 2009.

Quoting from the BBC electric Proms website: "BBC Electric Proms was proud to present a true British legend. Dame Shirley Bassey graced the Roundhouse stage with a unique performance celebrating 50 years at the top of show business. Dame Shirley was joined on stage by the BBC Concert Orchestra conducted by Mike Dixon, performing some of her most famous tracks alongside new songs from her forthcoming album, 'The Performance'. The show will be broadcast live on BBC Radio 2.

Britain's most successful female artist ever, Dame Shirley Bassey is rightly famous for her commanding renditions of classics Big Spender, Light My Fire and Something. Her Bond themes - Goldfinger, Moonraker and Diamonds Are Forever - are perhaps the finest in the series. This evergreen artist continues to influence a new generation of musicians. In 2007, at Glastonbury festival, Arctic Monkeys paid tribute to the Dame performing a version of Diamonds Are Forever. The same song was reworked by Kanye West for his hit Diamonds From Sierra Leone.

At the Roundhouse, Dame Shirley Bassey was joined by Tom Baxter, Richard Hawley and the Manic Street Preachers' James Dean Bradfield. Dame Shirley treated the Roundhouse to numbers from her much-loved songbook whilst premiering new work. Said the artist, "What I'm most looking forward to at the BBC Electric Proms is performing songs from my new album 'The Performance' for the first time - it really will be a special moment for me." It is worth noting that this was Dame Shirley Bassey's only live show this year. BBC Electric Proms is delighted that she chose to celebrate 50 years of song with this very special intimate concert".

Dave the Locust said…
Thanks as well! DL'ing this as I type...

BTW, did you know that the original recording of 'Goldfinger' was produced by none other than the reknowned Sir George Martin?