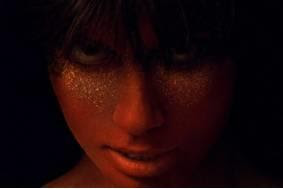 We start our second new music round up with SAADI whose promotional biography tell us & I quote 'As precious stone is extracted from its natural environment to be cut and polished, revealing its infinite multi-colored reflections, SAADI derives elements of musical influence and transforms them into pop gems rich in melody and reflecting an almost schizophrenic obsession with music.

SAADI, the musical pseudonym of the radiant Boshra al Saadi, is an eclectic and transcendental artist with a unique ability to create harmonious tunes tiled from fragmentation's of both empathetic influence and detached curiosity. Drawing early influence from sources as diverse as Bob Dylan, classic 80's synth pop, traditional Arabic music, punk rock, Nigerian music and Brian Eno, SAADI assembles her musical creation to form what is fundamentally her own. This collision of pop-smarts, exotic influences and fearless eclecticism spawns music which sounds both sophisticated and delightfully accessible'.

Now I have to say the above is no small work of art in its own right as writing goes, the good news is she sounds really good, and is going to one more artist to keep on the radar this year.

Songwriter Boshra AlSaadi was born in a tiny village in Damascus, Syria before relocating and growing up in a rainy suburb of Pittsburgh. At the tender age of 17 she moved to NYC's East Village where she has resided and created music ever since. Having developed her New York roots with Serious Business band, Looker, SAADI has come into her own with the upcoming 12"/EP titled "Bad City". Due for release on 9th March 2010. Prepare to dance. 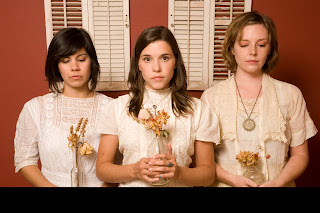 Austin's Dana Falconberry, praised by the Austin Chronicle as one of the city's "most arresting female vocalists" and "most promising singer-songwriters" is back with her newest record Halletts, released a few weeks ago on January 14th of this year.

The album revisits some of her previous works as well as including a few new ones, this time with the help of a full band. Influenced by and compared to the likes of Gillian Welch and Lucinda Williams (if your gonna do comparisons that grab my attention these two artists do the trick !), the foursome plans to hit the road this spring in support of the new record with stops in the South, Midwest, and East Coast of the USA.

A few words from Dana on the recording of Halletts: "I woke first after dreaming of parachuting from the clouds and wandered out the screen door. Tall tall grass, a small red barn. I gathered dried leaves and returned to the house, the others had woken. We set up our instruments and stood in a circle in the living room, surrounded by old couches and microphones. On the east wall a painting of a horse. Golden hair, soft green grass. We sang to her and to the cicadas, and to each other."

This is a really good song, that will no doubt appeal to a good number of Beehive Candy visitors. 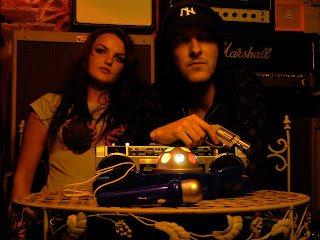 Ok if we are being a little gentle with this round up then lets crank things up with 'noise rock' band Gangcharger.

Formed in January, 2009, the Denver outfit Gangcharger has ascended rapidly through the ranks of their local scene, quickly earning themselves slots on large summer festivals like The Westword Music Showcase and The Denver Post UMS, as well as sharing the stage with such like-minded bands as Autolux, The Sian Alice Group and Mika Miko.

There promo says - 'Seamlessly blending classic rock song structures with updated guitar sounds and broken radio static assaults, their brand of noise has prompted comparisons to early Sonic Youth, My Bloody Valentine and A Place to Bury Strangers, and drawn praise from local critics such as Tom Murphy, who stated "if you're a fan of noise rock of any stripe, or you like your music almost aggressively raw, this act is the embodiment of both."

Gangcharger’s debut EP, Metal Sun, was released on December 19th, 2009, at a massive warehouse bash described by Westword as a “party you think belongs in places like New York.” The record is quickly garnering critical approval from writers like Billy Thieme: “Gangcharger fills a sorely under-represented hole in the Denver scene. Raw, forced chords and heavy bass drill into the inner ear and drag you and your surroundings inside with them, leaving you in an aural vertigo, leaning heavily on sheer volume to remain upright - live and on record, the sound is huge.” Aiming to harness the momentum, founding member Ethan Ward and newest addition Paige Peterson are now at work recording the first full length release for a group that local press has already labeled “one of Denver’s best bands.”
2010FM (Music and More)