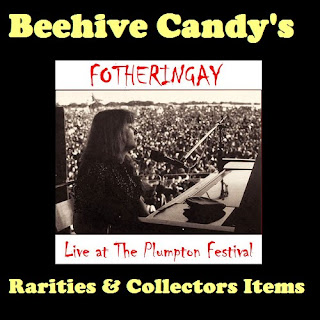 Hopefully Beehive Candy will be back to normal from now on, following a series of broadband problems, and illness in recent weeks. One individual left a comment that we are shameless promoters and because of the existence of torrents and so forth we are hardly doing anything special here! Well we are happy to support new artists we like, and share old boots, regardless of the odd (very odd) persons snide remarks, perhaps they are a bit sad & lonely..

This is a must for fans of Sandy Denny or Fotheringay, and whilst the audio quality is only average, it is quite listenable and a wonderful piece of history from the short lived band.

Fotheringay was formed in 1970 by singer Sandy Denny upon her departure from Fairport Convention. The band drew its name from Fotheringhay Castle, where Mary, Queen of Scots, was imprisoned in England. The castle was also the inspiration for the song "Fotheringay", which Fairport Convention had included on their 1969 album, 'What We Did on Our Holidays', before Sandy Denny's departure from that group.

This then is Fotheringay performing at the Tenth National Jazz and Blues Festival, held at Plumpton Race Track, Streat, East Sussex, (England) sometime between the 6th-9th Aug 1970.

From Wikipedia: Two former members of Eclection, Trevor Lucas and Gerry Conway, and two former members of Poet and the One Man Band, Jerry Donahue and Pat Donaldson (bass), completed the line-up responsible for what was long assumed to be the quintet's only album. This folk-based set included several Sandy Denny originals, notably "Nothing More", "The Sea" and "The Pond and The Stream", as well as meticulous readings of Gordon Lightfoot's "The Way I Feel" and Bob Dylan's "Too Much of Nothing". During the year of its original release, the album failed to match commercial expectations, and pressures on Denny to undertake a solo career, she was voted Britain's number 1 singer (two years consecutively) in Melody Maker's readers poll increased.

Fotheringay disbanded in January 1971 during sessions for a projected second album. Some of its songs surfaced on Sandy Denny's 1971 debut album, The North Star Grassman and the Ravens. Lucas, Conway and Donahue resurfaced in Fairport Convention in 1972 to record the Rosie album (on which some Fotheringay material was also used). However, Conway played on three tracks only and began session work afterwards. Both Conway and Donaldson have worked with Richard Thompson, among many others. Lucas and Donahue stayed with Fairport (the Nine album came out in 1973) for another couple of years, with Denny rejoining in 1974. This line-up recorded two additional albums: Fairport Live Convention (re-titled A Movable Feast in the U.S.) and Rising for the Moon. Denny, along with Donahue and Lucas, left the band in December 1975. Conway eventually joined a reformed Fairport in 1997.

In 2007 the BBC announced that Donahue would be attempting to complete the abandoned project (which he accomplished using previously unheard takes from the original archived tapes). Permission had finally been granted and the work was completed by summer of the following year. The resulting album, titled Fotheringay 2, was released by Fledg'ling Records on 29 September 2008.

Anonymous said…
IMHO, what I mostly like about visiting blogs is the love & soul that each of the animators of the blog put into sharing their musical tastes, presenting what they feel it the best into music, etc... Opening some kind of their own musical library and to share it !

I think this deserves a special appreciation from the visitors.. So, thanks for sharing,

zico said…
Sandy!!! That about say it all but as I should also point out that this band a great one also. nearly as good as the Great Fairport Convention. Dont miss it.
8 March 2010 at 19:15

Anonymous said…
keep up the good work! this has to be one of the most ethical blogs out there. can't understand who could object
8 March 2010 at 19:41

Anonymous said…
I've always been a big fan of Fairport and Fotheringay so I would like to thank you very much for this.
11 March 2010 at 19:06