Coltrane Motion are a Chicago-based electronic indie rock duo, with a new album titled  'Hello Ambition!' which was released a few days ago via Datawaslost, which they are currently touring in support of.

Lead singer, Michael Bond records sixties obsessed electronic pop in his home studio, while guitarist Matt Dennewitz covers it all in wailing distortion and delay at their live shows-the result is a raucous wall of sound built out of drum loops and fuzzed-out melodies, held together by swirling synths and organ drone.

The group has its origins in a hanfdul of lo-fi CD-R and compilation releases, culminating in theit 2007 full-length debut, Songs About Music and a series of successful tours across the US and Canada. Their frantic live show has been described by the press an an "exuberant seizure" and the "cool kids in programming class", it's hyperactive intensity is a far cry from your usual laptop performances.

I just had to copy the following publicity piece as it is a good summary, “Stevie Ray Vaughn trapped in a woman's body with Janis Joplin screaming to get out.” This is how one critic describes Kelly Richey, a blues-based rock virtuoso.

They continue Buoyed by critical praise and fiercely loyal fans, The Kelly Richey Band tour extensively bringing their live experience to venues throughout the US, Canada, and Europe. The attention centers around this Kentucky native’s guitar playing; Kelly Richey’s proficiency has earned her comparisons to Jimi Hendrix and Stevie Ray Vaughan while gaining her a place on stage with blues legends, Albert King and Lonnie Mack.

OK having listened to a good number of songs from the band I have to say that for me Kelly's vocals are somewhat 'softer' than Janis Joplin which is no bad thing as with so much excellent musicianship going on this complements the guitar work rather than competes with it. Blues rock fans will love The Kelly Richey Band.

NYC based singer songwriter Mary Jennings who goes by the moniker of Jennings has come to our attention over the last week.

Her development into music is of note  Mary’s surge in musical expression started after the sudden death of her mother.“This tragedy rocked me to the core, but there is so much beauty in what it allowed me to do,” she says. “All of my emotions came pouring out in the form of melody.” At the time, her father, a former musician, gave her the option to go through therapy or record an album. He knew both would be equally helpful to her, but by recording her music, she would be able to have something to hold on to and share with others for a lifetime.

It is often my experience that 'singer-songwriters' either capture my imagination and register straight away, or just dont 'work' for me on a personal level. I am not sure why but it seems a trend. Jennings 'works' because she is genuinly talented and has enough variety in her song and musical styles to keep me interested. It's radio friendly music and perhaps quite mainstream for Beehive Candy however if you like something whats the problem?

Beatific is brainchild of vocalist, guitarist, and producer Elad Marish. In his latest studio effort he brings together bassist/co-producer Eric Holden and drummer/co-producer Jonathan Gorman.

Playing in a vibrational sandbox of infectious beats, indie rock roots and electroacoustic influences, Beatific's hypnotic grooves mix with a languid, lyrical prowess and deep melodic sensibility. Marish is interested in accessing those secret places where the whimsical meets the angelic and magical; when we are able to shed the masks of our identities and don the beatific smiles - countenances of our higher selves.

Ok it's just annoyingly catchy and has got stuck in my head so lets get it stuck in yours too.

Colour Revolt  are an Oxford, MS band dubbed a 'Band To Watch' by Stereogum and the 'best edge-of-your-seat energy since The Arcade Fire' by Paste.

They have 'crafted their strongest statement to date' with new album ‘The Cradle,’ due out on August 10th 2010 on New Fear/Dualtone.

The band has been whittled down to core members Jesse Coppenbarger (vocals, guitars) and Sean Kirkpatrick (guitar, vocals), and the resulting consolidation of creative energy has reinvigorated the group, resulting in a 10 song album that focuses the band’s wild-eyed, textured, standing at the edge of the world rock.

Mention Arcade Fire and I get a little anxious, as I am a flag waving fan of said band and any comparisons need to be bonafide or I get a little rattled. OK no need to panic I can see some positive similarities Colour Revolt are clearly not trying to be like them and have enough of thier own individual class and talent going on, I guess the likeness is in the energy and passion which is no bad thing. One to watch out for. 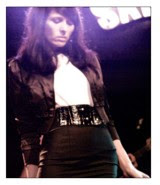 Jonneine Zapata completes our second round up this month. A mood filled introduction to her stated 'Infused with smoky, psychedelic instrumentation and slow-burning swells, Jonneine Zapata delivers a definitive grand-slam with her debut release, ‘Cast The Demons Out’, a record that luminously captures the musical essence and prowess of this one-woman army'.

Word is she has an electrifying live stage show, and comparisons with Patti Smith and PJ Harvey have dutifully been made.

Beehive Candy have the single release 'Good Looking' to share and on the strength of this will be checking Jonneine out some more.This is a great song full of mood and intensity that made us stop what we were doing and give it a proper listen.