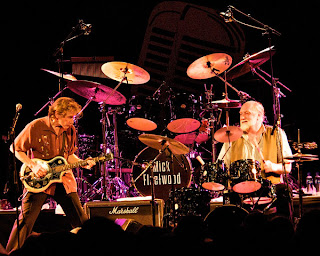 This is The Mick Fleetwood Blues Band live at Fabrik, Hamburg, Germany, on the 12th October 2008.

This makes a great companion to the officially released live album  'Blue Again' (recorded live at the Sheldon Concert Hall in St. Louis, Missouri in February of 2008) and we would urge anyone interested in this show to check out that album if you have not already done so. Blue Again received a 2010 Grammy nomination for 'Best Traditional Blues Album'.

This concert features some alternative songs to the official release and is a great reminder of the incredible material from the original 1960's Fleetwood Mac.

Mick Fleetwood did not seek to copy the original Fleetwood Mac, rather to "pay it tribute by creating something both historically respectful yet new and invigorated." To this end, he recruited former Fleetwood Mac guitarist Rick Vito, who had played on the Behind the Mask album in 1990, together with two relative unknowns, Lenny Castellanos and Mark Johnstone, to form the Mick Fleetwood Blues Band. The band subsequently undertook a tour of the United States, and later in 2008, Europe, including an appearance at the Notodden Blues Festival in Norway.