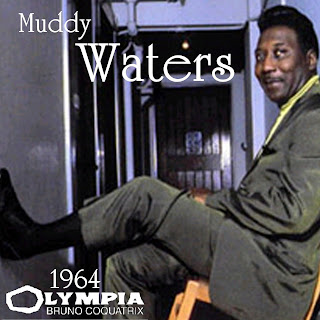 This is the Father of Chicago blues Muddy Waters live in concert at L'Olympia Bruno Coquatrix, Paris, France back in 1964.

Muddy's sound was basically Delta blues electrified, but his use of microtones, in both his vocals and slide playing, made it extremely difficult to duplicate and follow correctly.

"When I plays onstage with my band, I have to get in there with my guitar and try to bring the sound down to me," he said in Rolling Stone. "But no sooner than I quit playing, it goes back to another, different sound. My blues look so simple, so easy to do, but it's not. They say my blues is the hardest blues in the world to play."

His 1958 tour of England marked possibly the first time amplified, modern urban blues was heard there, although on his first tour he was the only one amplified. His backing was provided by Englishman Chris Barber's trad jazz group. (One critic retreated to the toilets to write his review because he found the band so loud).

The Rolling Stones named themselves after his 1950 song "Rollin' Stone", (also known as "Catfish Blues", which Jimi Hendrix covered as well). Hendrix recalled "the first guitar player I was aware of was Muddy Waters. I first heard him as a little boy and it scared me to death". Cream covered "Rollin' and Tumblin'" on their 1966 debut album Fresh Cream, as Eric Clapton was a big fan of Muddy Waters when he was growing up, and his music influenced Clapton's music career.

The song was also covered by Canned Heat at the legendary Monterey Pop Festival and later adapted by Bob Dylan on the album Modern Times. One of Led Zeppelin's biggest hits, "Whole Lotta Love", is lyrically based upon the Muddy Waters hit "You Need Love", written by Willie Dixon. Dixon wrote some of Muddy Waters' most famous songs, including "I Just Want to Make Love to You" (a big radio hit for Etta James, as well as the 1970s rock band Foghat), "Hoochie Coochie Man," which The Allman Brothers Band famously covered, and "I'm Ready", which was covered by Humble Pie. In 1993, Paul Rodgers released the album Muddy Water Blues: A Tribute to Muddy Waters, on which he covered a number of Muddy Waters songs, including "Louisiana Blues", "Rollin' Stone", "Hoochie Coochie Man" and "I'm Ready" (among others) in collaboration with a number of famous guitarists such as Brian May and Jeff Beck.

Angus Young of the rock group AC/DC has cited Muddy Waters as one of his influences. The song title "You Shook Me All Night Long" came from lyrics of the Muddy Waters song "You Shook Me", written by Willie Dixon and J. B. Lenoir. Earl Hooker first recorded it as an instrumental which was then overdubbed with vocals by Muddy Waters in 1962.

Anonymous said…
I can't pull this of Flame either. Shame, as it looks a good show. FWIW I can access The Mick Fleetwood Hamburg show (in IE8, Firefox & Opera), so maybe Flame have changed their set-up.
14 June 2010 at 15:39

Anonymous said…
My thanks for taking the effort of reposting to Sharebee. Worked a treat!
15 June 2010 at 09:45

Bruno Ysla Heredia said…
Thank you, I was looking for this record so long ago; i had a casette of this concert from a Jazz & Blues collection, i uploaded the images of the cover and the backcover , some titles and the composer's credits in the casette were wrong but i don't know if it is the same with the credits of the band.