Whilst We Were Asleep - Part Two

May 01, 2015
Some more recent new music that I wanted to share, again in no particular order and genre hopping, however I was reliably told many years ago that 'variety is the spice of life', shame I had such a misspent youth as all that 'variety' seems to have come back with a sting in the tale. Anyway down to business... 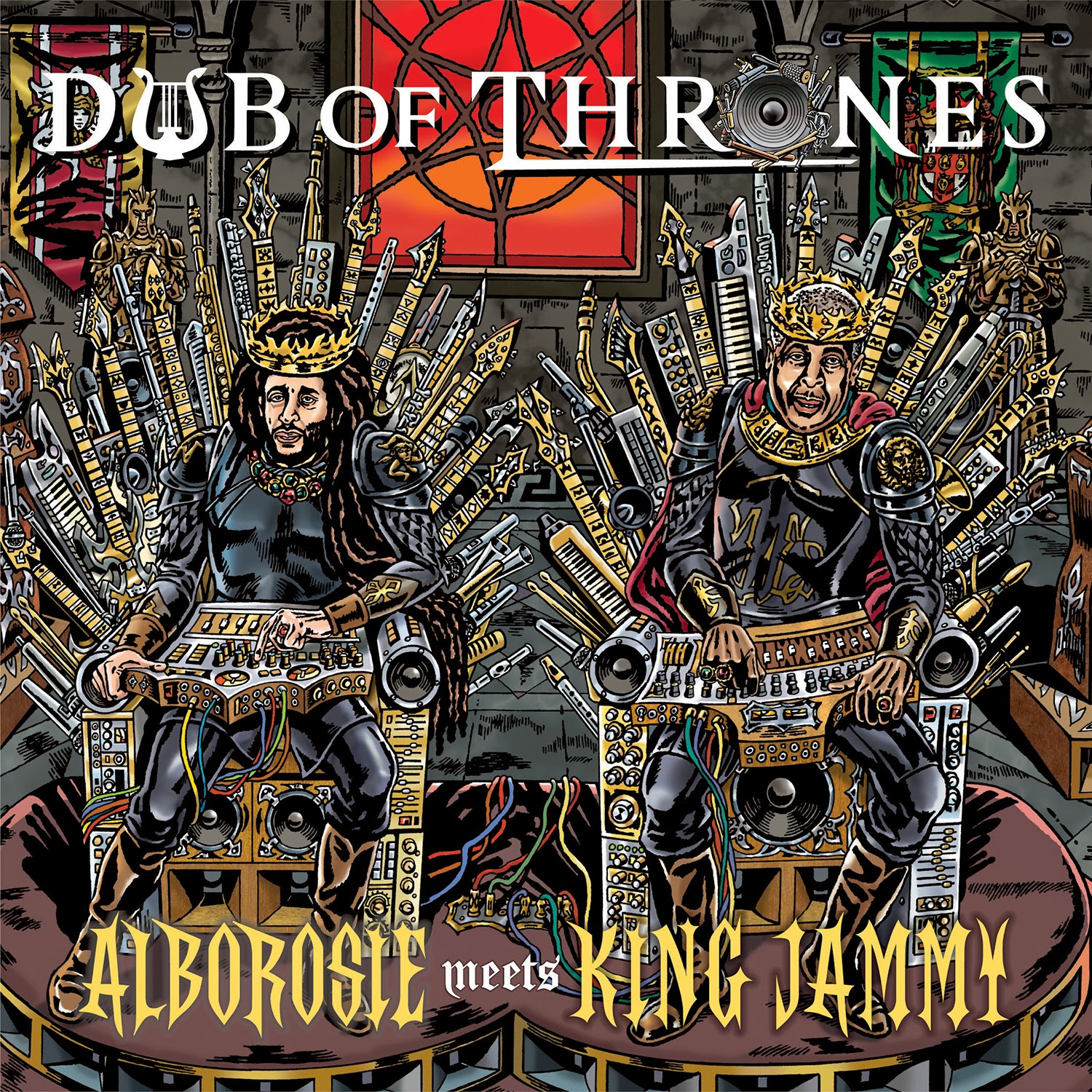 Alborosie Meets King Jammy is a historic pairing of one of Jamaica’s most pivotal dub legends King Jammy with the modern day Italian-born dubmaster Alborosie.

Last month they released 'Dub Of Thrones' a mostly instrumental collection of material and very fine music we think. If you like Dub or reggae or anything remotely in that direction this is for you!

Mixed by Alborosie at his Shengen studio and King Jammy at his studio in the Waterhouse district of Kingston, this old-school meets new-school clash delivers an authentic dub reggae listening experience. With speaker-shaking, neighbor-waking and no-prisoner taking bass, this is designed to be played at high volume for maximum effect.

Alborosie and King Jammy plan to tour in support of this release throughout the summer. Dates will be announced at another time. They are already booked for California's 31st Annual Reggae On The River Festival. - Album available from VP Records/Greensleeves.

OK I'm quoting here - Los Angeles indie pop favorite Layne has released the moody new video for “Somebody,” her ode to musicians who leave the serenity of rural life for the challenging pursuit of success in the city. “Somebody” is the newest single from Layne's third EP, Warrior.

When Layne was fifteen, she released an album entitled Better Than Me. Two years later she released an EP called Mind Games. By this time she was playing almost every weekend at different venues throughout South Dakota, and was featured twice on public radio and multiple times in the newspaper. Immediately after graduating high school, Layne relocated to Los Angeles.

Layne co-produced Warrior with Devon Corey (Comeback Kid, The Material). The young indie artist has a very clear idea of how she wants it all to sound: “I want people to see the production we’ve spent so much time creating come to life, and to hear the huge wall of sound - even if there are only two or three players on stage.”

The music is what it is, great indie pop that Beehive Candy just happens to love. If you are in the US of A then Layne's spring tour has a few more dates: 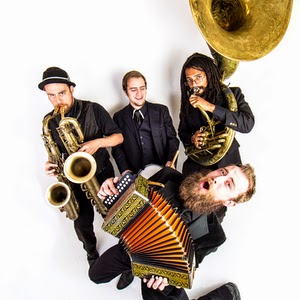 I am intrigued by The Dirty Bourbon River Show. These guys play bluesy, Lisztian piano-driven ballads, and punk-ish street music, straight out of New Orleans (not my description but it fits, so I will go with it!).

The promo that accompanied the music was rather lengthy however being bone idle here's a copy and paste of some of it -  Step right up. Dirty Bourbon River Show winks at the old-time medicine show, with music to draw in crowds. But there’s no snake oil on offer, just sounds enough to fascinate, enthrall, and heal. Tubas tango with feral-voiced crooners, punkish numbers bump into the sweet plunking of a ballad.

These wonderful madmen play the gospel of New Orleans song, and they preach it loudly on their ninth album, Important Things Humans Should Know (release: April 7, 2015), then taking the word on the road with a four-month U.S. tour.

Band leader and multi-instrumentalist Noah Adams came late to music; he was 20 when he began playing the piano. But it was drifting into the Crescent City that really changed his life. Finding himself in a place where music drips from the pores likes summer sweat, he knew he’d discovered his calling, and began proselytizing like a convert. “I got swept away by amazing players like Dr. John, Fats Waller, Huey Smith,” Adams recalls. “I spent three years just shedding and absorbing stuff.” And from that start the Dirty Bourbon River Show was born in 2009.

“Our very first gig was at Tipitina’s Homegrown Night, where you can get your start,” Adams says. “It’s free, you just try to get people to say your name at the door. We told everyone. It was an hour slot, but we only had 30 minutes of music. We got an amazing turn out, went all out, and it just grew from there.”

A mix of New Orleans natives and people drawn from farther afield, the show mixes its influences like a roux. Jimmy William’s tuba and Dane "Bootsy" Schindler’s drums on “Animal” make Caribbean vibes collide with a booming brass dirge. “Wicked,” a paean to the Big Easy’s seamy side, tips its hat to songwriters like Dr. John and Randy Newman. The album is a love song to the city on the Gulf Coast.

Phew! and that's not even half of it. Anyhow I am amazed by there music and reassured that somewhere, some people are doing music they love and entertaining many. The video below is but one of many dimensions to this band, so go search YouTube for some more.

I have received getting on for a dozen emails since last November regarding Janine and The Mixtape and when putting this little compilation of artists together, thought maybe if I do a feature I will be left alone. Then I checked back and realised each promo was for a different song, so on a totally selfish level keep sending the songs promo's.

Again plenty of fine variety and all to the highest of standards and very enjoyable may I say.

Website HERE. A few words on their background here - Building up to the release of her new EP (coming May 12), Janine and the Mixtape has been releasing new content every Monday as part of her Little Mixtape Mondays campaign. Starting in February with a Nirvana cover, she drew inspiration from Eckhart Tolle for "This Moment, debuted the video for her buzz single, "Hold Me," and most recently releases "Lose My Mind" audio and visual.

Now based in Brooklyn, Janine and The Mixtape – known to friends and family as Janine Foster – began performing at open mic nights in her native Auckland when she was but 14 years old. She soon developed her own unique amalgam of pop, indie, R&B, and hip hop, all built around her emotional song craft, otherworldly vocals, and utterly individualistic persona. Released initially by her own Little Mixtapes Records in 2013, her debut EP, Dark Mind immediately shot Janine and The Mixtape into the spotlight – as well as the top 2 on the iTunes Store’s “Top R&B Albums” chart. The EP – which also includes the hit single/video, “Little Bit” (featured on VH1’s Love & Hip Hop Hollywood) – received worldwide applause, with high praise coming from such outlets as MTV, Billboard, VIBE Vixen, Complex, and VIBE, which ranked Janine and The Mixtape among their “R&B Secret Society: 26 Acts You Should Be Listening To.”  The New Zealand-born singer/songwriter/multi-instrumentalist/producer's acclaimed debut EP Dark Mind was re-released via US-based DSP’s on November 4th, 2014 (after joint venture with Atlantic Records).

I remember reading a comment left on Beehive Candy a few years ago that said something along the lines that 'I was just a shameless music promoter'. I remember being a little 'ruffled' by the comment and felt the desire to exact revenge on the anonymous individual. Well maybe I am a promoter of sorts, I do not get any money for it, this remains a labour of love for the most, however yes I do encourage you to checkout these artists and their music. So if that makes me a promoter then I am guilty as charged, however I am most defiantly not shameless! Just enjoying the musical journey, hope you are to.
2015 New Music Whilst We Were Asleep 2013-15