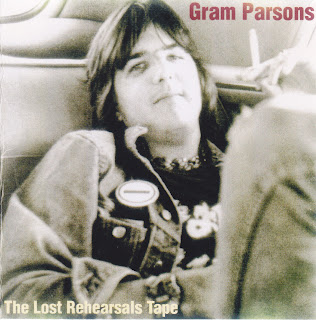 This is a fascinating selection of Gram Parsons rehearsal tapes from 1972, and I will quote a little from the liner notes that accompanied this CD version which surfaced on 'Golden Eagle Records' in the USA in 2003. I have included a separate file with the artwork and notes as these are well worth a read.

The record companies holding Gram Parson's material have more or less exhausted what material there is from his sadly short life and as Chris who provided these recordings to me pointed out (by the way, thanks Chris) a lot of the bootleg material for Gram Parsons is of fairly average audio quality.

The five audio tapes that this CD was compiled from, were included in an auction lot at Christies that was bought by one of Gram Parsons biggest fans and were part of a selection of Gram's personal belongings that went to auction.

The five cassettes dated from 1972 and include Emmylou Harris and others on some of the tracks that were most likely recorded through a condenser microphone into a portable tape player, however the audio quality suggests that a little more sophisticated equipment may have been used for some of the songs. It is proable that Ric Grechs English home was used for some of the sessions along with hotel rooms for others.

All of this material is another reminder of 'what could have been' if Gram had stayed with us a little longer, it's also another reminder that a personal musical favorite of mine Emmylou Harris developed her talent with some of the best.

Anonymous said…
copy and paste the link into your browser (its a url) and then follow the process, it really is simple.
13 February 2011 at 10:30

Robinbrevard said…
Hey thanks for the share, especially the liner notes which I didn't have!

Anonymous said…
Any chance of posting somewhere other than flameupload? It's blocked by my security software as a risk.

But I understand if you can't.

After reading the notes I realized that I had this elsewhere (or at least something close to it) on a semi-legit Euro CD that was released around 15 years ago. So, no need to upload it anywhere else.

ALSO, for any Parsons fanatics, if you do not have this, then get it. It's not spectacular, but it is very interesting and there's not much Gram out there.

HytekFred said…
What luck coming across this. Gram was a pioneer, always loved listening to him in the days - and later days. Thank you kindly for sharing.
15 June 2011 at 18:09

amusicalguy said…
I don't know but I tried the second download link but nothing comes up to download. Is it just me or what?? Thanks!
11 August 2011 at 07:39

Anonymous said…
This sounds like it would be amazing! I would love to hear it.