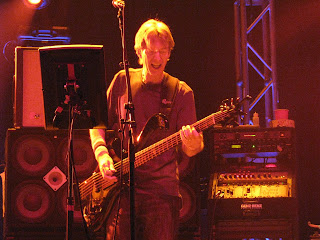 From the Internet Archive (IA) this is Phil Lesh and Friends Live at Langerado Music Festival on the 9th March 2008. The sixth Langerado Festival was held March 6, 2008 through March 9, 2008, making it one day longer than the previous year. The festival took place on the Big Cypress Indian Reservation, thirty miles west of Ft. Lauderdale.

Unfortunately earlier this month Phil Lesh reported “I was diagnosed with bladder cancer in early October, and have spent the last few weeks at the Mayo Clinic in Scottsdale doing tests and eventually surgery to remove the tumors. I am very fortunate to have the pathology reports show that the tumors are all non aggressive, and that there is no indication that they have spread". We wish Phil a full and speedy recovery.

Phil Lesh and Friends is of course an American rock band formed and led by Phil Lesh, former bassist of the Grateful Dead. Around the time of this gig we are told - A new formation of Phil & Friends, including Lesh, Larry Campbell (guitar, mandolin, fiddle), Teresa Williams (vocals), Jackie Greene (vocals and guitar), Steve Molitz (keyboards), and John Molo (drums), debuted in September 2007 in Santa Barbara, California.

On February 4, 2008, Phil and Friends joined Grateful Dead guitarist Bob Weir and drummer Mickey Hart, along with Barry Sless and Ratdog guitarist Mark Karan, for a concert called "Deadheads for Obama", in support of Barack Obama's presidential campaign. The show was the first time that Weir, Hart, and Lesh had played together since 2004. Even more recently, the band performed the final shows at the Warfield Theater in San Francisco, California. Bob Weir sat in for a run of five nights that included sets of the Grateful Dead's first few albums.

Sound Quality: Very Good. There are close on two thousand recordings of Phil Lesh on the IA, this one was chosen for audio quality, the set list, and because you have to start somewhere.