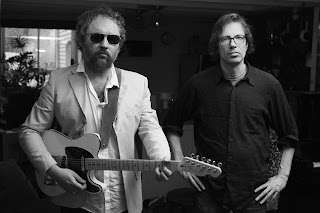 August Wells - Come On In Out Of That Night.

Background Info - 'Come On In Out Of That Night' is the new single by August Wells and was released on September 4th on FIFA ('Forever In Financial Arrears') records.

A musical project formed in New York by Dublin native Ken Griffin (Rollerskate Skinny, Kid Silver and Favourite Sons) and New York pianist John Rauchenberger, August Wells teamed up with the Cork based independent label earlier this year for the release of the sumptuous 'Here In the Wild' single and that partnership continues for what is the perfect follow up.

'Come On In Out Of That Night' once again has the deep lilt of Griffin's voice combined with the sound of Rauchenbergers piano arrangements, add to that Louis Schwadron (Radio Head & Grizzly Bear) and Griffins uplifting brass arrangements which are accented by fat choruses contrasting with the deep twisted vocal. The result is a an elegant three minutes of lustrous music tinged with melancholia yet bathed in hope offering a real slice of the alternative.

August Wells recently appeared on Ireland's RTE 2's 'Other Voices (excerpt attached) and have just completed an Irish in support of their forthcoming release. The are currently recording their second album which is due for release in Feb 2016.

This is to good to miss and I am grateful to Eddie at FIFA for bringing it to our attention. Everything about this song cries quality, superb vocals and music, and the vital ingredient - a passion for delivering great music. 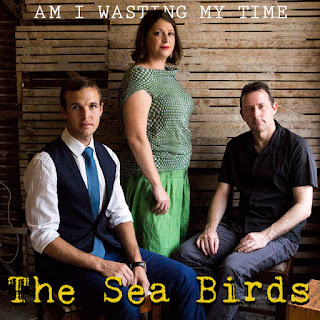 The Sea Birds - Am I Wasting My Time.

Background - The debut single 'Am I Wasting My Time' from Melbourne band The Sea Birds is a stunning glimpse into the beautifully crafted repertoire of this illustrious five-piece. The group began their musical voyage into the rich musical landscape of indie pop sound in late 2014. Comprised of dual lead vocalists Lara Wentworth and Loic Mamet and primary songwriter Mike Amarant, every member plays a part in the execution and production of ideas, including the rhythm section Lucas Wentworth and James Duplessis who have only very recently just joined the group.

The arrangements of Am I Wasting My Time draw heavily on the band’s love of indie pop. The sweetly gentle melodies with shades of alt country rock and nuanced guitar work pair flawlessly with the melancholic sentiments of the song’s lyrics. The outfit felt this track that captured the band’s ‘sweet but sad’ musical sensibility, embracing a ‘good earthy, no frill musical approach and is easily reproduced in a live setting.’

When writing songs band member Mike Amarant likes to get lost in his creation. “The great thing about writing songs is the endless artistic license and infinite exploration of ideas and music that you can bring to the process,” he says. Likewise, when crafting Am I Wasting my Time Mike wanted it to have a universal message that anyone who’s loved or been loved can relate to. “The song belongs to no- one and everyone,” he says. “It is easy to relate to the fragility and uncertainty that every new relationship brings. That is what is at the heart of the song.”

The track was recorded with David McCluney who has engineered and produced for a who’s who of independent Australian bands for more than three decades, including Skipping Girl Vinegar, Mick Harvey (The Bad Seeds, The Birthday Party) and Nick Cave. The band also enlisted the help from Tony Floyd (Black Sorrows, Gurrumul) for the single. The ensemble clicked and the recording was nailed quickly. The band’s approach to recording is all about being lean and purposeful when they hit the studio. “You can still be creative and have fun…but it costs a lot less to do this before you get to the studio,” says Mike. “Recording Am I Wasting My Time was a quick kill in the studio.”

The Sea Birds has evolved slowly but steadily, and they want to continue that evolution. Their strength lies in the cross-over potential to be many things due to the diversity of the group’s members and influences. Loic Mamet has moved over from Mauritius to further develop his musical style and vocal approach, Lara Wentworth comes from a broad chorale, music theatre and popular music background and Mike Amarant is the group’s chief songwriter and guitarist with a lot of ongoing ideas and completed pieces that he feeds through to the group.

'Am I Wasting My time' is an upbeat indie pop song, with a leaning towards alt country both musically and in the harmonies. The other four songs in this release, are a little gentler, and definitely have more of a alt country feel. As debut's go, this is a very good selection of songs, (website here). 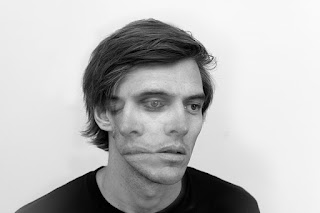 Background - Angus C-Crowley is an alt-folk poet with a head of soul and sweet harmony. An acoustic wordsmith constantly caught between two Pauls - Dempsey and Kelly - with Jeff Buckley and Evan Dando whispering into his ears.

Angus C-Crowley has always seen music as a vehicle to share his poetry and a platform to explore his understanding of the world. Vocally and lyrically driven in the classic folk tradition, with the honest accompaniment of a guitar, ukulele or banjo, with each song he aims to strike the balance between aesthetics and substance and create a moment of pause with his audience.

‘October’ is a soulful acoustic drift that will slowly soak its way into your ear, from the 30th October, 2015. It is the debut release for Angus C-Crowley, who has been tinkering away at his melodies and harmonies for the past decade while lapping up the sunshine on the NSW Mid-North Coast.

‘October’ was originally conceived over 10 years ago while Angus C-Crowley was at university, recording with a friend in his parent’s garage. Revisited and refined this year for release under the guidance of producer Matt O’Connor from the A&R Department, the track displays a developing maturity in Angus C-Crowley’s sound while still retaining the honesty and simplicity of the original with stripped back instrumentation and smooth layered vocals.

The song explores the fickle nature of sleep and dreams, from the effortless highway nod to the evening struggle to ‘lead’ your mind to rest, and the general malaise born from the inevitable stocktaking of life as the year comes to an end. “It came together from a series of scattered thoughts on receipts and in sketchbooks over time, that I slowly weaved into a melody I had been toying with for a while.” – Angus C-Crowley.

'October' gives the impression that the singer is pondering and thinking, before singing each verse. This adds to the overall feeling of a personal song, and that we are allowed to share, some of the authors thoughts. Calmly delivered, both the stripped back feel, and engaging vocals, make for a fine song.