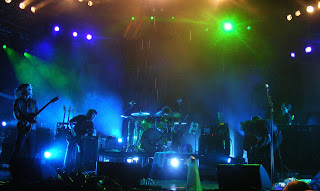 As was the case on this occasion. The band toured in support of their then new album Evil Urges that summer, which included a storied appearance at Bonnaroo Music Festival in Manchester, Tennessee. The band, beginning at midnight, performed for four hours in the rain. Unfazed by a torrential downpour for much of its first half, the band's set went on to feature thirty five songs, including all but two tracks from Evil Urges and numerous covers, and featured guest appearances from Kirk Hammett of Metallica. The set has commonly been regarded as among the band's personal best and in the history of that festival; Rolling Stone called it "career-defining."

Sound Quality: Good to very good (widely regarded as one of Bonnaroo as well as the bands best concerts, the audio quality holds up for the whole four hour duration, for what is something of a legendary performance).