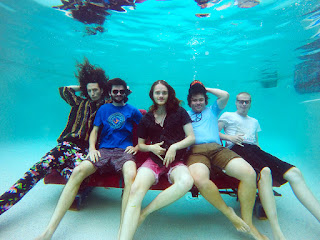 And we are told - One hot summer under the shade of a Queenslander indie-rock 5-piece Timber Bones jammed out their first song together. “Travelling Song” was written in celebration of one of Australia’s newest pass-times- “the festival romance.” A side effect of excessive cider consumption and inadequate sun safety the festival romance is a whirlwind of summer dresses, white smoke and young love. The third single from Timber Bones "Travelling Song" is best enjoyed in the company of strangers with inhibitions left back home with your day job.

The bouncy, folk-rock tune takes inspiration from the likes of Mumford and Sons, Fleet Foxes and The Mama's and the Papa's. "When we first started writing music together we had aimed for a more folky sound overall,” says guitarist Kendall. "Originally the guitar lines were written for banjo and the song was jug-tootingly folky. When the song came out of pre-production at The Palace, producer Caleb James had worked this awesome festival vibe around it. People heard it and started dancing so naturally it became our festival song and my banjo became a paper-weight."

Timber Bones leave on their maiden bus voyage after a month’s work under the very same Queenslander. Planning an east-coast tour for the coming summer Timber Bones whole journey will be documented in a web-series to appear on their website (here).

This has those feel good vibes through and through. Upbeat and to use the expression above 'bouncy', it does all of this without losing the sincerity. It's a nice bright song. 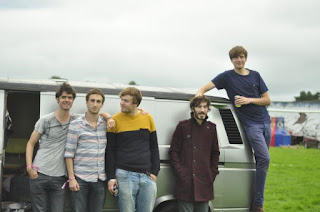 Background - Eight-years on from Enjoy Eternal Bliss Brighton based quintet yndi halda are now preparing to release their new album, Under Summer. Having toured across the UK, Europe, USA and Asia, including shows at London's famed Barbican Hall, Koko and Union Chapel venues, and entirely selling out a short residency at Hoxton Hall; yndi halda's fervent and nominally patient fan base have been eagerly awaiting this new material. For those who were previously enthralled by the band's revered string-heavy and densely layered flavor of instrumental rock, there are seemingly endless new aural delectations to unearth and embrace in the band's intense second effort. Their music is at once subtle and joyous, hitting huge emotional peaks around moments of serene gentleness and heart-breaking sadness in its orchestration of sonorous guitar interlacing, meticulously crafted string arrangements and - now - soaring vocal harmonies.

Speaking about writing the new album, James Vella (guitar, vocals) said "We called the album Under Summer. It is two references. For us at least. Inevitably it will mean something different to everyone who hears the album. But for us it is the very upper limit of the sky under which we wrote and recorded the album. The endless July days that we played into, a perfect calm and joy. But it's also a sadness. 'Under' as in 'beneath'; sorrow and heartache. We found that important because we want to express that in our music too. Sadness and bliss. What one means to the other." The new album is due out on the March 4, 2016 via Big Scary Monsters in the UK/EU and Burnt Toast Vinyl in the US, and follows the critically acclaimed Enjoy Eternal Bliss, which was released in 2007.

A four minute taste of their forthcoming album, in this excerpt of the track 'Golden Threads From The Sun' and what a teaser it is! It suggests we really are in for a treat when the album is released, one for the diary to say the least.