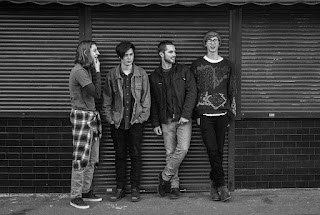 Background promo - Slow Culture is the musical child of four guys who spent their adolescence saturated in music. The culmination of various lineups and bands dating back to 2009, their music holds within it the personality of four people who've effectively grown up together. It started (as all promising bands do), when Jack, Ben and Lee decided to form a band even though two didn't play an instrument. Ignoring this basic requirement, the three carried on. With Payton joining later, opting for bass synth, the groups sound was cemented, developed from a wide variety of influences.

The product of various lineups dating back to 2009, Slow Culture could be described as the meeting place of psychedelic and alternative rock. Their debut single, “Hoax”, alternates between quiet withdrawn verses and raucous choruses, layered with psychedelic sounds reminiscent of early Pink Floyd. Recorded at Free Energy studios in Camperdown and produced by the legendary Phil Punch, the singles reliance on experimentation in the studio is clear. Layers of guitar effects, synths and a cigarette lighter used as a guitar slide are the meat on the bones of a song held together by the incessant practice and revision that the band undertook prior to recording.

The band describes how the song “came out of an acoustic jam [they] just happened to record years ago”, the name taken from a biography of Brian Jones which was sitting in the corner of the room. Stating that the single has taken on so many forms that it’s almost “unrecognisable as the same song”. “Hoax” will be released 15th of January 2016.

I don't know why, but Radiohead sprang to mind when I started listening to 'Hoax'. It's certainly not a copy of their style, Slow Culture from this song at least, have quite an individualistic sound. Whatever, I like 'Hoax' and it's easy to understand the psychedelic meets alternative rock reference above. 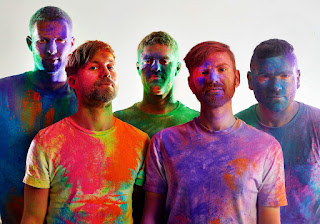 Background promo - Shields embody the Playlist Generation. While other artists publicly decry music streaming services, Shields have been shaped by the diverse artists whose music they might never have heard through more traditional means.  Shields’ musical output is a reflection of these diverse influences, and their debut album ‘How Can We Fix This?’ has a genuinely broad appeal whilst at the same time refusing to conform to a simple description.

After hitting the live circuit heavily (including support tour dates with Placebo and Everything Everything, and performing at Glastonbury and the BBC6 Music Festival in Newcastle), the band crafted a tight sound and a solid body of songs, ready to record this debut. The development of their unique sound has been largely due to their DIY approach to production. Using their own studio space to record a vast range tracks over a 12-month period, the band caught the eye of double Grammy award-winning producer Adrian Bushby (Muse, Foo Fighters) who helped them complete their debut album.

Bushby said, “Shields, in my opinion, are one of the best bands I've heard in a long while in both songwriting and performance. They are an incredibly fresh and original-sounding band who I think will go on to achieve great things.” The recent single ‘Face to Face’ captures the kind of innovative alt-pop instrumentation and delicate harmonies that saw 2012 single ‘Mezzanine’ (also on appearing on the album) featured as iTunes’ single of the week and garnering praise from sources as diverse as Kylie and Zane Lowe. Shields – How Can We Fix This? is out 26th February 2016 on Kaleidoscope Records.

'Mezzanine' is the third of ten songs on the forthcoming album, and typifies the quality and vibrancy of the album. The band have toured a lot and worked hard to develop their pristine sound, something that becomes clearer the more you hear from the album. Work and effort aside, this is great music, after all that's what it's all about.