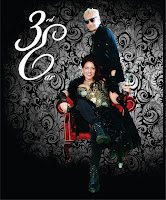 Promo words - Third Ear engage the senses and offer an exquisite arrangement of themes and mood, designed to gently guide you as you embark upon a shared journey. Sometimes breezy, laid back and cool, sometimes taut, explosive and rollicking, Third Ear’s musical works are textured throughout with depth, imaginative flair and a soulfulness that seeks the heart.

According to Third Ear, “‘The Ghost Road’ is written from the perspective of a person attempting to conquer psychological torment, depression, guilt and anxiety, as it treks through wastelands of fear, turmoil and inner despair.” Deep rich vocals, a “killer riff”, and a hauntingly effective undertone graphically illustrate the subject matter with drive, purpose and gusto.

This is one of those songs that I will play far to much. Vocals are wonderful and the no nonsense musical soundtrack is just right. For me it's a little bit like a brighter version of the Sisters Of Mercy and maybe The Doors, but hey, what a mix to be likened to.