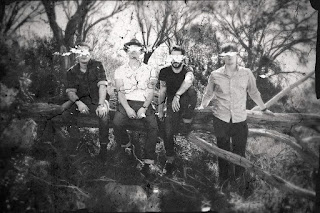 Background promo - After sharing stages with the likes of The Jungle Giants, The Cairos, North East Party House and more, Adelaide’s Cabin Cults are now gearing up for their headline launch show for new single ‘Lights Out’ January 16 at local watering hole The Hotel Metro.

Taken from their just released EP ‘Riot Is The Watchword’, ‘Lights Out’ is an energetic slice of synth driven post-punk with an urgent lyrical desperation of disbelief that’s all wrapped up in a Pixies inspired pop sensibility. Teaming up with producer Badcop (Tkay Maidza, Mio), the band have craftily captured their jam room instincts while ultimately shaping their material with an electro inspired sound.

The fraternity of Cabin Cults is made up of brothers and friends and indeed hails from the city of churches where the myth of purity amongst the reality of depression is evident throughout the city. The habitus that shapes them plays through them and through this body of work reveals the cracks in the veneer that binds them. Expect to hear more from Cabin Cults in 2016 as the band also prepares to announce east coast dates along with plans to head back into the studio.

Taken from a four song EP 'Lights Out' typifies the natural energy of Cabin Cults. The expression used in their promo 'synth driven post-punk' is pretty much spot on. It's upbeat, pleasing, and there's enough hooks in all four songs, to make a second listen more or less mandatory. 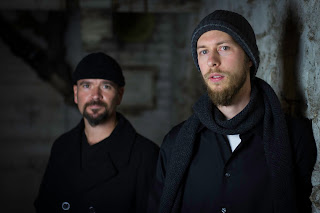 Background promo - Imagine a duo that combines its Americana, folk/prog rock and pop influences with a passion for the sounds of acts that range from Kula Shaker, Pink Floyd and Tenacious D to The Beatles, The Decemberists, Queen and Michael Jackson.

Each brings their unique talents to the XChange, with Nate contributing percussion and rhythm tracks as the "enchanting wizard of rhythm" and Ryan serving as the "professor," adding synthesizers, lead guitar and working as producer and engineer for the upcoming album. They prefer to deem themselves... the "maestro" and the "master."

Meanwhile, the duo dealt with the challenge of collaborating from afar... sort of. Even though they both grew up in Wisconsin, Nate was living in Phoenix during the recording process, meaning that every note and beat was literally an "exchange" of ideas. Now that the work is done, "New American Century" sashays comfortably between the pair's numerous beloved musical genres—while maintaining the identifiable signature and melodic moxie that has already become the act's calling card in live gigs.

I'm playing catch up again as this song has been around for a while, and the album was released back in November. However the album is so good, I did not want to miss out on giving them a mention. 'Roots' is but a small taste of the creativity of Midwest Soul Xchange, who travel through genres and styles with ease and top it all with superb twin vocals.