Two For The Weekend: The Wealthy West - Eileen Carey 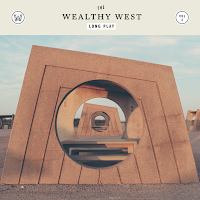 The Wealthy West - I've Got To Go.

Background bio - Brandon Kinder may not be a household name but there's a good chance you've heard his songs or voice somewhere over the past few years as front man for Austins anthemic rock group The Rocketboys.  As a solo singer under his own name and his Wealthy West moniker Brandon's music has been used in an enormous array of TV shows, indie movies and commercials.

On 'Long Play' his debut LP as The Wealthy West he lets his fancy fly free and sets of on a grand journey. Themes of travelling, searching and seeking, tie many of the songs together. The Wealthy West becomes a character looking for something he may never find... or has already found and has to convince himself of that. Ultimately there is an honesty to the music. There are no wasted lyrics to fill space. Where The Wealthy West is clear on his road there is a sense of joy. Where he's confused or foundering there's a feeling of hope and experience to get through it all.

'Iv'e Got To Go' is the first of eleven songs on the album 'Long Play' (due for release on February 9th). The album is full of melodic, thoughtful songs. As I read the bio above, I thought it may be at the least, a little fanciful. Having heard the album if anything the words are understated, regarding what is a very good album.

Background promo - The endlessly versatile vocalist Eileen Carey and her latest single, “Faith,” roar in the new year with an astounding eight cross-format award consideration nominations from New Music Weekly. The single has also just hit the #1 spot on Both New Music Weekly Country Charts. Talk about Faith paying off!!

Moreover, Carey’s YouTube channel has been garnering new and repeat viewers by the thousands, and her heightened prominence has earned her an upcoming guest appearance on “The Weekend Morning Show” on KCAL-TV, the CBS powerhouse in Los Angeles.

At last count, Carey’s popular YouTube channel had racked up more than 100,000 views and was still growing.  She will doubtlessly expand her fan base Sunday, Jan. 10, when she brings her musical magic to “The Weekend Morning Show” on KCAL-TV.  Carey is back in the studio this month recording her next album in Los Angeles.

I received the above promo and nearly ignored it. Plugging a TV appearance in Los Angeles didn't seem a very good fit for Beehive Candy. Anyhow cutting to the chase, I listened to 'Faith', thought to myself, this is good, so you get the song to listen to, and Los Angeles readers get a free TV reminder.