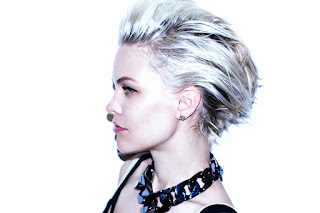 Promo words - Raised by a single mother in south side St. Louis, Conway's ambitious attitude moved her to New York after turning 17. While in New York she became best friends with drummer Amy Wood who convinced her to move to L.A. to record for free at her dad's studio. “She and I packed an old Honda and I moved to L.A. All I wanted to do was make music, so I was willing to leave everything in NYC with practically nothing but a bass and some clothes,” she says. “I thought I’d be there for six months. Six months turned into 2 bands and a solo project's worth of grinding it out: writing music, booking gigs, designing artwork, making videos and putting music out. When I was finally offered some support I was naïve, took some bad advice and signed a bad production deal."

After months of performing, writing and collaborating, she came up with the song “Big Talk.” When a friend's attempt at making a video didn't meet her standards, she followed her instincts and shot/edited a new video on her MacBook. Her homemade sauce went viral after a 1-day feature from Nylon.com boosted it stone-cold-out-of-the-blue. This led to an avalanche of label interest, causing Conway to do a little more than pinch herself.

With the song exploding on blogs, Hype Machine, and an amazing live show, labels came knocking. She was signed to Columbia records through the pre-existing production deal. Things were looking up. She supported tours for St. Lucia and after opening a few shows for Ellie Goulding, Ellie decided to take Conway on her entire North American tour. Conway supported UK dates for Broods, Charlie XCX and has done dates with Robert DeLong. But soon, there was trouble in paradise. "I started realizing that things weren't getting done. Between all the people now involved in my career, no one really knew what was going on or seemed to have an organized plan. It was beyond frustrating and heart breaking to have worked so hard and built something out of sheer will and determination, just to watch people casually mishandle it. I had to make a change."

Regardless, Conway was able to maintain a good relationship with Columbia Records and asked them, as well as the production company, to let her out of her deal. Conway was given her recordings back. "I am independent again and it feels great! I need to be free to release music, play and tour. There is nothing worse than feeling silently stuck. I have never been good at sitting still. Gotta keep it moving. It's the only way to grow."

Sometimes all you need is a good pop song. One that's catchy, memorable and with enough lift, to help put a little extra skip in your step. 'Sudden Dawn' achieves all of that, so job done.