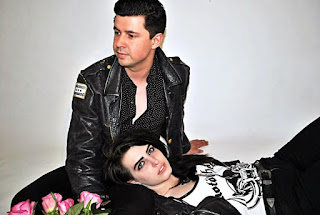 Background promo - Band Aparte announces debut album. From down the end of Los Angeles, the bare bones gravepunk duo Band Aparte strips down and combines elements of gothic rock, synthpunk, and beachy lo-fi as macabre appreciation simmers in the gut of the city.

Vocalist Brian Mendoza effortlessly channels Joy Division and Nick Cave, crooning into a death bouquet with his shirt unbuttoned. But he's not doing it to imitate Morrissey's aesthetic --  Band Aparte's shows are fast and fierce, and the crowd works up a sweat at every venue they play.

It's a dangerous mixture that has crushed nights alongside such bands as Cruelty Code, Roses, Ghost Noise, and Terminal A. Memory On Trial [Manifesto] LP, CD, Digital, CS Release Date: August 19, 2016.

With a funky deep riff 'Cherry Chapstick' calmly and determinedly builds into a uncluttered straight piece of post-punk rock. Vocals standout distinctively above the tight soundtrack, in this no nonsense song. 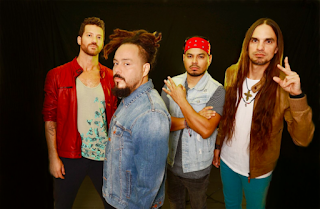 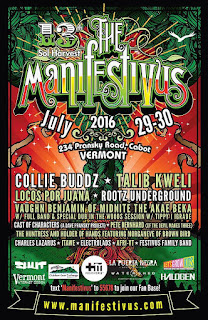 Fresh off their triumphant Colombian promotional visit, their first in over three years, Locos por Juana are gearing up to co-headline for The Manifestivus Music Festival on Saturday, July 30 in the woods of Cabot, Vermont. A "local festival with global vibe," The Manifestivus kicked-off in 2002 on 93 acres of breathtaking land and celebrates its 13th anniversary with the aim of promoting personal evolution through music, art and culture.

Set on a gently rolling hillside meadow surrounded by forest, the timber stage creates an unforgettable experience. The lineup, with Locos por Juana's set starting at midnight, includes an array of world music and beloved international and local acts, the likes of Bermuda reggae star, Collie Buddz who paired up with Locos por Juana for their current single "The Cure" recorded between Miami and Bermuda and released in May, 2016 to critical acclaim. Talib Kweli, who has also collaborated with Locos por Juana on their upcoming Caribe release with "For The Ladies," tops the list of guest performers. Past performers include Common, Barrington Levy, John Brown's Body, Sierra Leone's Refugee All-Stars, Oumou Sangaré, Midnite and Black Sheep.

David Pransky, the band's bass player, who partnered with Carlo Rovetto of Positive Pie, founded "Festivus," as it's been dubbed, in 2002 making it an all-ages gathering that provides on-site camping, medical facilities, vendors of authentic African and Ital food, with Yoga and West African dancing and drumming workshops that round out the cultural experience.

'The Cure' is an extremely powerful reggae song, that mixes classic vibes alongside more modern styles. Laden with hooks and massively danceable, those who are going to hear this live, are in for a real treat.