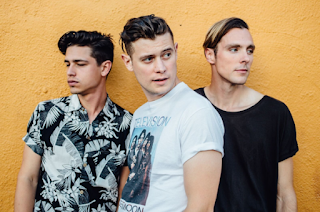 Background promo - Dreamers  first broke out in the scene when their track, "Wolves (You Got Me)" made it's way into the Top 18 - where it stayed there for months! their new single, "Sweet Disaster" has been added to Advance Placement! They have toured with acts like Atlas Genius, Zella Day, Stone Temple Pilots

Dreamers spent nearly two years on the road, touring and near homeless - living out of their practice space. Now, after bouts of vagrancy, nomadism, and vigilant attempts at normalcy, Dreamers calls Los Angeles home, committed to its collective vision of artistry, inclusion, and idealism. Their debut was recorded at the iconic Fairfax Recordings (formerly Sound City) - the same studio artists like Nirvana, Fleetwood Mac have recorded.

'Sweet Disaster' is one of twelve songs from the "This Album Does Not Exist" album, due August 26th via Fairfax Recordings. It's pretty typical of this energised collection of tracks, many carrying enticing hooks along with an overall positive feel. As debut albums go, this is one solid effort, full of good tunes that deserve to get noticed. 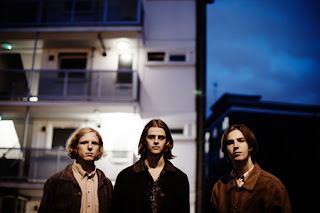 ‘Let’s Pray’ is a massive, emotive and bold statement of intent from the Hampshire three-piece on top of their game, Blaenavon’s dark romanticism exudes lonesome warmth - reminiscent of The Smiths and The Cure - and self-assured, mellifluous tendencies.

Singer Ben Gregory said the following about the new single: "When the best songs have all already been written, order yourself a smile and a steak - equally as rare - chew with your mouth closed and your hands in your pockets and wait... Wait for sanity. She'll settle up."

‘Let’s Pray’ and previous single ‘I Will Be The World’ are the first new tracks from Blaenavon since their acclaimed 2015 "Miss World" EP. ’I Will Be The World’ caught the attention of Zane Lowe at this year’s SXSW, who convinced label Transgressive to let him play an unfinished version of the track on his Beats 1 show and declared them "one of the most talked about, breakthrough bands” playing the festival.

Following an epic debut US trip in March, which included a visit to SXSW where the band were tipped by the likes of The Fader, Esquire, NME plus many other taste makers, Blaenavon have announced a run of new festival appearances - including Glastonbury, Latitude Festival, Reading & Leeds, and Electric Picnic. The boys have spent the last four months on the road supporting bands such as Foals, Bloc Party, Sundara Karma and The Sherlocks as well as sell out headline shows at The Lexington, Dingwalls and around the country.

'Let's Pray' is the second song we have featured by Blaenavon, and deservedly so. This is a quality indie rock song, with a smooth flowing feel, it's both melodic and full of great harmonies. 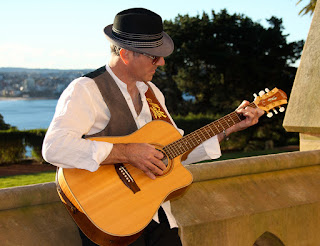 Background - Here’s the latest offering from a truly talented songsmith, ‘Need To Know’ is a classic track from CJ Hooper, reminiscent of the singer-songwriter heyday of the 70’s! The new single mixes elements of John Lennon's take on Pop-Rock with CJ Hooper's own lush harmonies and thoughtful lyrics. Piano accompanies a delicate acoustic guitar, guiding the slow build of the track through reflective verses into a captivating chorus bound to absorb the listener.

“I lost my dad a few years back, which made me question many things. A yearning to know what’s ahead of us and reflecting on the reality of still being here is what lead to writing this track,” says CJ Hooper on the genesis of the track.

CJ Hooper’s debut independent single ‘By My Side’ launched him into the radios of Australians everywhere, making its triple j premiere on Roots n’ All with Sarah Howells. ‘Life Feels Good’ followed the success of his debut, releasing earlier this year, and featuring yet again on triple j. It found its way onto playlists at a number of big indie stations across Australia, including 2RRR FM, SYN FM, Pulse Radio, Inner FM, Radio Adelaide, Valley FM, Homebrew Radio, being played amongst the likes of John Butler Trio, The Waifs, Dan Kelly & Nick Cave.

‘Need To Know’ is the latest independent release from the talented CJ Hooper, who’s personal and diverse approach to music is resonating with audiences worldwide. “Need To Know” by CJ Hooper will be released 12th of August 2016.

Another artist featured some time ago on Beehive Candy, CJ Hooper's new song 'Need To Know' is a beautifully delivered piece. I can understand the John Lennon reference in the above promo, it's definitely not a copy, however the songs construction does bare some of Lennon's hallmarks. That said this song stands on it's own merits and really does build into something quite wonderful. 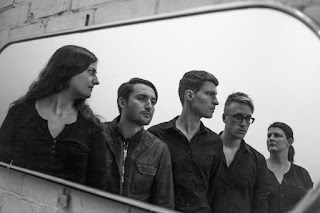 Lee was experiencing heart palpitations at the time of writing this song and was required to wear a heart monitor for a few days to monitor his heart activity, thus the words: Checking on the pulse/ Beat reporter/ Plastic tentacles/ Reaching in.

A few years ago, Greg and Lee started writing songs in their grimy College Street apartment, with no real vision of creating a full band. Several years later, what was once a casual folk tandem had turned into a quintet.

We're not classical, we're not folk, and not rock but our sound combines all three genres. As a band we've toured extensively throughout Ontario and Eastern Canada, formerly under the name The Benefit of the Free Man. This is our first full length as Places Erupt. Look for the album out August 19th.

'Mayday' does suggest a band that are comfortable to explore differing genres to deliver the right overall sound. This is a fairly gentle song, that is cleverly layered so that the fine vocals and variety of instruments and sounds all have clarity. The album 'Breathe A Storm' takes their musical ideas even further, in a collection of eight wonderful songs. If you like the single, then I whole heartedly recommend the forthcoming August release. 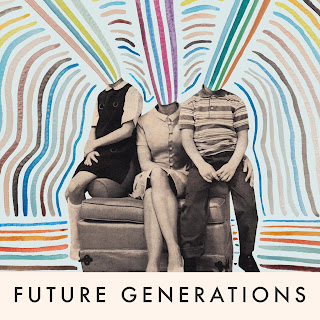 Future Generations - Thunder In The City.

Background - Future Generations will be releasing their self-titled debut album today Friday, July 29 via Frenchkiss Records. In advance of the album's drop the band are sharing “Thunder In The City”, the new single from the record. The band's Eddie Gore says "We are extremely excited to be finally releasing this out to the world. We've grown so much through this process and I have to say that is probably the biggest theme through the whole thing: Growth.”

“Thunder In The City” is one of the last songs written for the record, and it best embodies the band’s feelings about the upcoming release. Eddie adds “I don't want to get too specific about meaning behind the song because it's not supposed to be specific, but it's definitely about being happy in a moment and about looking back and being happy with yourself”.

In the style of MGMT, Friendly Fires and FUN, Future Generations have excellent pop-sensibilities and know just how to draw a listener in. Apart from the hooky vocal and melodic components making “Thunder In The City” a rich sonic experience, they also know how to provide sufficient variety of sounds pulling off the track’s all-important hooks.

On the eve of their debut's release Future Generations will be playing a record release show at NYC's Mercury Lounge (July 29), and it is a great starting point for any NY listeners to check out what all the fuss is about. In addition, they are playing the following dates this summer with more to be announced:

'Thunder In The City' is the tenth and final song on today's album release. As a guide, it gives an absolute flavour of the bands music, which I guess is loosely defined as pop orientated Alt Rock. They can and do mix up the tempo's, and the promotional piece above is pretty much straight down the line. It's looks like some New Yorker's are in for a good gig tonight! 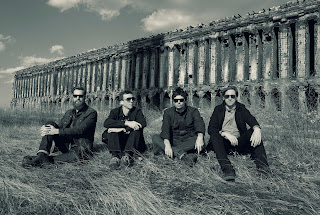 Background bio - "Just when we thought we knew where we were going / I learned I never had it right," rasps Jonathan McIntire, over staccato guitars and pulsing keys. The opening lyrical salvo to Rakunk's self-titled EP is ironic, however--McIntire and company clearly know exactly where they're going, and have been doing it well since the band's inception.

Formed by McIntire and guitarist Tames McTigue in late 2014, the duo wasted no time recruiting bassist Taylor Briggs and then drummer Thomas Benko, booking shows and recording two demos and an EP, which tracked at the top of Soundcloud's trending sections, drawing the attention of labels and management firms. After a few membership changes (including Tames' departure to move to Qatar), Rakunk's lineup has solidified into McIntire, Briggs, guitarist Mike Maneechotte and drummer Brian Dunk and the four-piece has never sounded bigger.

Augmenting the band's huge, guitar-driven rock sound are elements of hip hop, EDM, hardcore, even some Krautrock, all guided by McIntire's cutting vocal and production work. "I think I write music that has an empowering big sound," he said, "and even though our all of our influences aren't modern in a sense, we are trying to get away from classic/nostalgia/dad-rock that dominates a lot of what you'd call rock."

The new EP highlights that modern edge, bursting out of the gates with "Writing With a Knife," a guitar-and-synth-heavy rocker with the soul of a dancefloor banger. "Wicked Bible" features a sludgey guitar riff dripping swagger, Maneechotte's nimble guitar floating over Dunk's muscular drumming. "Banged Up" is an arena-ready monster of a track, with Briggs' thundering low end dominating the proceedings.

But album closer "About to See the Light" is the real surprise, taking every ounce of inspiring, atmospheric songwriting on display in the other three songs and stripping out the heaviness in favor of acoustic guitars and a heartfelt vocal that would do Oasis proud. "Hey, I know times have been / Like playing the piano with broken hands / It's a night to fail," McIntire intones, his voice imparting more hope to the song than the lyrics might suggest.

'Trillionaire' is a feisty in your face rock song. The song erupts with a wall of energy both musically and with gritty vocals, so much so, that the short reprise around three quarters of the way through, is quite unexpected, before the songs thunderous end.