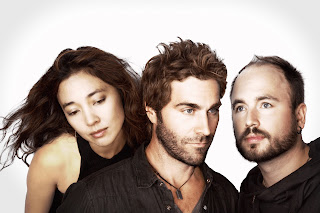 Bridges takes the band in a new direction, deepening their exploration of live analog/electronic music. The album is purposefully arranged to take the listener on a journey, like cycling through a Tron-grid landscape to launching into a euphoric stratosphere. Thoughtful, dynamic and full of rich powerful choruses, wide lush verses and tangential bridges, this album strikes a chord and "bridges" technology and emotion.

The 2nd of a trilogy and thematically bridging Disconnect : : Reconnect (2014) with its following concept album Singularity (2017), think of Bridges as an inter-dimensional gateway connecting a circuit or a thought. “Bridge symbolizes transformation and change,” describes frontman, Conrad Schuman.  “Before me was a bridge: transparent, beam of light guiding and accepting; stretching from the dead ashes of an unforgiving nightmare to the jeweled vision of a life to start anew.”

Developing Bridges, Beautiful Machines cocooned in the frigid winter of 2015 in Europe, particularly Berlin, a city that inspires re-invention of such artists as Depeche Mode, U2 and David Bowie. Sampling sounds from CERN in Geneva, reverberating the famous halls of Hansa Studios in Berlin while our Black Star Bowie departed, breathing in the diverse art and electronic music culture all bled into and cultivated connections of curios creations.

'Free' is one of a number of really powerful electronic rock songs on the latest album Bridges. The band mix lighter moments with seemingly unstoppable, walls of sound. The album is creative, adventurous and at times quite epic. 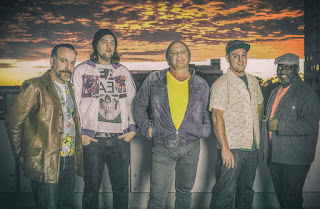 Background - "Hey hey, they've run down the heroes. Who's gonna save us from the danger as we sail over the edge of the wine-dark sea."

After their critically acclaimed 2013 debut album Sunset On The Good Fight, Sydney soul roots reggae band Kinsky offer up a new 6 track EP. Since mid 2015 songwriter/vocalist Ernie Garland and the band have been putting together the new tracks for what would become The Edge Of The Wine-Dark Sea. With the tracking done, Ernie teamed up once again with legendary Catalan studio engineer Doct’R’n’Ric (pronounced Dr. Enrique) in Tokyo to mix down the new tracks at the esteemed Volta Studios. The result being their biggest, warmest, jumping-out-of-the-speakers- sounding record to date.

During the writing process Ernie was working nights driving a truck on the Tarmac at Sydney airport. Due to the cruisey nature of the job and with a lot of downtime he was able to work on the new tracks whilst at work. "I used to park up in this yard right near the end of the runway. At that time of night it was very quiet with not a lot of plane activity. It was so peaceful there I used to work on the lyrics for the song I was working on that day at home. It was all on my phone. I got a lot done. If it was a keeper I'd lay it on the demo the next morning,” says Ernie.

With heavyweights Terapai Richmond (drums) and Winston Stephenson (bass), Garland wanted to capture the groove from the comfort and warmth of his own home. With his good mate and gun sound engineer Dan Rossides at the controls, they set about capturing some nice pockets that went on to be the bed tracks for the new EP The Edge Of The Wine-Dark Sea.

Kinsky has shared the stage with international acts such as The Skatalites, Groundation and Balkan Beat Box as well as top Australian acts such as Dubmarine and Kingfisha to name a few, quickly becoming prominent faces in the Australian roots music scene, commanding legions of fans along the way. “The Edge of the Wine-Dark Sea” EP by Kinsky will be released 29th of July 2016.

'Bad For Business' is the second song we have featured by Kinsky this year, down to the fact that they have a new EP release next week, and I just love their music, simple as that really. Absolutely recommend all roots reggae fans to give them a good listen. 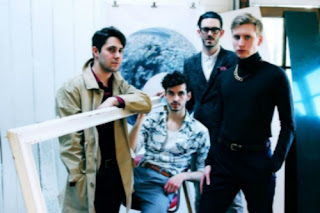 Background - London quartet Radio On are back with a brand new video for their latest single ‘Coast’. Radio On are Sam Hayward (Vocals), Adam Hartley (Guitar), Alex Deery (Synths) and James Johnston (Percussion). Having met whilst studying in London, they took their name from the seminal 1979 film by Chris Petit, one of a number of European art-house road movies that heavily influences the band.

These films became a major touchstone for the group, with their emotional depth, artistic merit and accessibility providing an ideal combination for the band to aspire to in their work. Their interplay between kinetic familiarity and atmospheric contemplation struck a chord and provided a neat musical philosophy for Radio On to build on.

The lead track to Radio On’s debut single released in May 2015, ‘You’re Always Right’, furthered the online support already gained by the band’s previous offering, receiving premieres from The Line Of Best Fit and Clash. The release also saw Radio On perform an oversold single launch show at The Islington in London, followed by shows at The Barfly (supporting Citizens!), The Great Escape Festival 2015 and Club NME at Koko. The single was subsequently hailed as BBC Introducing’s Single Of The Week, whereby frontman Sam was interviewed by the Lancashire station as well as the track being played every day for a week in September 2015.

‘Lost In The Crowd’ is the first single to be taken from Radio On’s debut EP, entitled Coast. With the rest of the EP to follow in 2016, this first offering represents a discernible step up in the song-writing and production prowess harnessed by the band through their 2015 activity – a prolific slice of electro-tinged indie-pop that has already proved a live favourite with the band’s growing fanbase.

The new video for the latest single 'Coast' is a good one, and is featured now on our BeeVids page. That said the song is as pleasing when just listening, so being the wonderful music site we are, you have a choice. 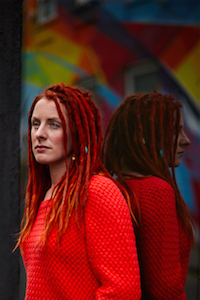 Background promo - Stunning new single from Sian Cross ahead ff UK tour with Sons Of Pitches. In an era where Disclosure and Rudimental bring the heart of drum and bass back to life, Sian Cross arrives with her own take on it.

Forming a sonic synergy similar to that of Dems and Dua Lipa, with the personal style of her song writing, it’s the evocative lyrics, based on true stories that create an additional connection to the listener with Anne-Marie esque vocals. Inspired by a man's struggle with his sexuality, Tell Anybody is a powerful offering with Sian’s unconstrained passion spilling into her words. Sian will be heading out on tour with the incredible Sons Of Pitches, so be sure to check out her tour dates below...

'Tell Anybody' is an emotional and atmospheric song. Soft and gentle moments, compete with explosions of angst and passion, in what is a pretty unique, and quite addictive electro pop song.