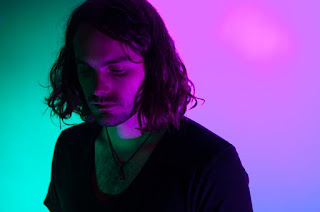 Jay Pray - I'd Go Anywhere (Do Anything).

Background promo - Brooklyn synth-pop artist Jay Pray is set to release his debut self-titled album on October 21 via Think Thought Records. Justin P. Romanos has had a love for music since was he was just old enough to pick up a guitar. Justin was drawn to performance and songwriting at an early age, and growing up became a regular in the DIY music scene around his rural Connecticut hometown. He and his friends had ever evolving musical tastes and learned more about the process of making music by consistently forming new bands and recording in Justin’s makeshift home studio. This landed him a spot at Drexel University’s Music Industry Program. Here he found a home of like­minded peers and gained a lasting nickname, “J Pré”, short for an early band called the Justin P. Romanos Experiment. He honed his craft by continuously writing and spent much of his time in the close­knit Philadelphia basement community where he fronted the indie rock band SHMNS. After graduating college in 2014, it was time to regroup, refocus, and reinvent himself as a musician.

Justin relocated to Brooklyn, NY and began to combine the best of his musical beginnings into his biggest, boldest, and most colourful pop album yet; as the newly reincarnated Jay Pray. Under the polished production of Brandon Bost, Justin’s new album flourishes into a lush landscape of bright tones in which every detail is carefully slotted in place. A strong but subtle beat propels the collection forward as it dips into sultry shadows and bursts into powerful blasts of sunshine. Intricate synth riffs and Justin’s gentle lilt twinkle amongst the swelling wall of sound, transforming love musings into a tropical sonic escape. Jay Pray is a refreshing arrival in a saturated pop scene with a debut worth diving into head first.

'I'd Go Anywhere (Do Anything)' has been gaining attention these last few days. It's a genuine indie pop song with beautiful synths and smooth vocals pairing perfectly and delivering a melodic hooky song. 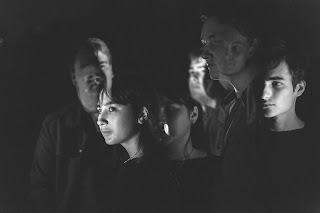 Soft Corporate - Slipped (From the EP Good Things Will Happen).

Background - Based in Melbourne,the indie four-piece  Soft Corporate explore the boundaries of pop with their simultaneously anthemic and intricate compositions. Performing for several years under another name the first three members Troy Sheehan, Madeline Booth and Jack Cross invited Reuben Dyer to join their group. As a collective decision they chose their new name Soft Corporate.

Leading the charge with their first offering ‘Boats’, the song is a blend of haunting vocals, evocative melodies and intelligent musicianship. With such depth to their sound, it's hard to believe that their EP Good Things Will Happen is their debut release. The first single 'Boats' is captivating and a highly expressive piece of music.

Discovered early on with the release by the Triple J Unearthed team as part of Triple J Unearthed High, Soft Corporate made it to the finals of the well-known competition under a previous guise. Reminiscent of their melodic indie rock predecessors, Soft Corporate draw inspiration from contemporaries Death Cab for Cutie and Unknown Mortal Orchestra and comparisons could be drawn to Band of Horses, The Shin and Doves with their slow-burning builds and shifting dynamics. Lead vocalist Troy Sheehan’s lyrics centre on deep reflections, moments of clarity, time and trying to survive the metaphorical or literal end of the world. ‘Boats’ is a lush heady mix, Sheehan’s performance is understated with a disarming charm.

Written in a their rehearsal space in Melbourne, their debut EP Good Things Will Happen came to life over recording sessions with producer Colin Leadbetter (Sarah Blasko, Whitley) in late 2015. Recorded at Sing Sing South, Leadbetter worked closely with the band unpacking their songs and developing their sound as a unit. Throughout the mixing process, the six songs that they took to the studio underwent several experimental shifts as hazy textures were introduced. The reverberant guitars and floating harmonies support and illuminate what is now their debut EP.

'Good Things Will Happen' is a solid six song EP of which 'Slipped' is the fifth track and quite representative of the bands enticing indie rock/pop sound. The band create likable atmospheric music, with plenty of hooks and a lush musical background for the fine vocals and harmonies. 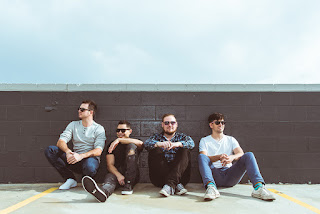 The Plastic Attraction - Holding You.

Background - The Plastic Attraction was hatched in Perth when schoolyard friends – Liam (vocals), Matt (guitar/vocals), Horna (bass/vocals) and Chris (drums/vocals) decided that after many years of talking about it, they would batten down the hatches and write some music, channelling 90s rock with a fresh flavour and less denim. The Plastic Attraction started with a communal sharing of riffs, jamming, experimenting with different sounds and building up a base of demos. Once the band amassed a collection of riffs, ideas and songs, they sifted through them to see what sound worked for the band and which ideas jumped out at them as keepers. Throughout the sorting and sifting process, the band played band nights at pubs and clubs to test their material and hone their live show.

‘Holding You’ is the band's debut single. The track was recorded at Sumo Sound Studios in Perth by Tristan Sturmer (Sparrow, Verge Collection, Make Way For Man) and was mixed by highly acclaimed audio engineer Andy Lawson (Tired Lion, Eskimo Joe). The icing on the sonic cake was the mastering by the inimitable Leon Zervos (Boy & Bear, Art vs Science, Last Dinosaurs).

Lead singer, Liam says, “'Holding You’ was born when Matt and Horna were jamming on some ideas and came up with that opening riff. The whole song stemmed from that intro section and once the drums came in, the song seemed to come together very naturally.” Once you dig beneath the lush harmonies, interwoven bass and guitar and airy-high fidelity sound, you realise that ‘Holding You’ is the classic tale of boy meets girl, girl promises boy everlasting love, boy and girl breakup, boy has extreme difficulty letting go.

Obsession, ego and delusions of grandeur rear their ugly head throughout the song as the lyrics describe the heartbreakee's deeply misguided belief that the ex should have to stick to all those things she said while they were together. “Holding You” will be released 26th of August 2016.

With a smooth and fast flowing beat, guitars and vocals that glide above, the song 'Holding You' is a breezy blast of melodic charm. 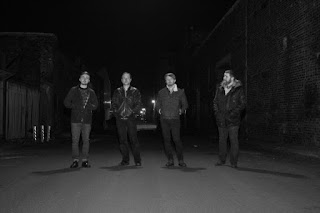 Oh Well, Goodbye - This City To Yours.

Background - Hailing from Liverpool England, Oh Well Goodbye quietly crept into the UK scene with debut cassette release ‘BG092’ through U.S label Bleeding Gold Records. Beginning as a solo project during down time of his 'dayjob' band People//Talk, Philip Rourke (founder of EDILS records/booking) quickly assembled like minded musicians and played a scattering of shows in London and northern England, as well as a 5 date tour of France in late 2015. Oh Well Goodbye, completed by Sam Banks (bass), Peter Seddon (Guitar) and Andy Fernihough (Drums) have continued to push creatively as a unit while fully maintaining their Lo-Fi DIY approach. Three new EPs will be released before the end of 2017 and each one presents a progressive step showcasing Oh well goodbyes bittersweet musical movements that border the edge of collapse. Post punk is murky ground but oh well goodbye given their northern English heritage slot in and out easily. A lush mix of early 90s styled guitars, dance punk beats and hushed almost spoken vocal ride along effortlessly. As beautiful as it is ugly, the nonchalant display masks the chaos and vulnerability underneath.

The first release of the trilogy is a four track EP entitled ‘Swoon’. A step up from the home recording of Rourkes debut effort, ‘Swoon’ was recorded in a Liverpool studio live by the bands drummer Andy Fernihough. ‘Swoon’ is available on pink and grey 7” as well as digitally from September 16th through Bleeding Gold records.The bands next release quickly follows and coincides with a European tour in October. A five track cassette entitled 'Acquiescence' is a co-release between UK labels Hail Hail and EDILS Records (digitally through Bleeding Gold records) will be available from October 16th. A more experimental and ambient collection compared to its predecessor, 'Acquiescence' see's oh well goodbye use drums loops and keyboards for the first time on half of the tracks while still in touching upon the bands pop sensibilities and downbeat 'post punk' sound. This leads nicely into the final release of the trilogy; 'I Know, I Know, I Know' which is a remix EP comprised of tracks from both 'Swoon' and 'Acquiescence'. Hitting the world wide web on November 11th, again through Bleeding Gold Records the digital only release features remixes by a host of acts including Dignan Porch (Faux Discx/Captured Tracks), Gorgeous Bully (Art Is Hard), Moonlit Sailor (Deep Elm) and new comers such as Dayflower and Grave Diggers Union.

The wonderfully understated vocals on 'This City To Yours' typifies the lo-fi and distinctive sound found on the 'Swoon' EP, with the exception of the third track 'Axe The Bay' which takes on a more ambient direction. With more to come, Oh Well, Goodbye appear to be on a  musical and creative roll. 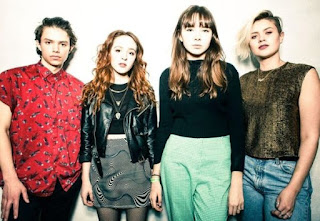 Background - Perfectly imperfect - that’s one way to describe LA based punk act, The Regrettes. Writing songs that proudly bear a brazen and unabashed attitude in the vein of acts Courtney Barnett or Karen O - with a pop aesthetic reminiscent of 50’s and 60’s acts a la the Temptations or Buddy Holly - the LA based four piece create infectious, punk driven tracks.

Lead by outspoken front woman, Lydia Night, and comprised of Genessa Gariano on guitar, Sage Nicole on bass and drummer Maxx Morando, the group have left the LA rock scene floored, managing to capture the hearts of jaded rock critics while opening for acts like Kate Nash, Jack Off Jill, Bleached, Pins, Deep Vally and more. With nothing but demos available online, the group are already beginning to generate hype, from outlets like NPR, and with Nylon already heralding them them as a “punk act you should be listening to”.

From the opening moments on a track by The Regrettes, we’re greeted with a wall of guitars, infectious melodies and a wistful nostalgia that continues right until the final notes. Taking cues from acts like Hinds and Hole, there’s a wistful sense of youth and vulnerability that lies at the heart of each song. A song by The Regrettes is, essentially, a diary entry into Lydia’s life. “My music is a spectrum of every emotion that I have felt in the last year, and you can hear that when you hear the songs. Everything that is happening in my life influences me. It’s everything from boys, to friends, to being pissed off at people, to being really sad. Just everything.”

The most intoxicating draw of The Regrettes is their bashful, heart-on-your-sleeve temperament - writing urgent and fast-paced pop songs with a punk rock mentality. “The way that we write, it’s all based on honesty,” muses Lydia on the group’s punk aesthetic. “If I finish a song, I’ll just leave it - I won’t really go back to it. I like things to feel in the moment and I don’t want it to be perfect. If I work on something too much I lose it and get bored and I want to do the next one..”

'Hey Now' is an explosive and feisty, "get over it" punk song. That said, the song is very catchy and the vocals and soundtrack are edgy whilst leaving enough room for an underlying melody.