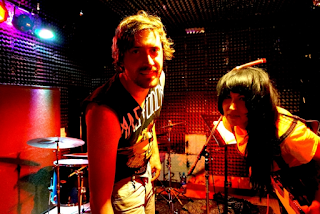 Background - We are told that Nee rides broomsticks and likes to gypsy around. Vanny likes to tinker and get stuff done. The pair met at a Melvins show in Chicago, and describe their sound is heavy glittery noise. They go on - "We like secluded areas and are rarely social. Our influences are stoner rock, doom metal, post punk, peanut butter and good beer. PS. Reject reality and live life as art".

The most recent release Noise Nurse is a compilation album of songs written by Nee while living in Toronto, Canada in the time frame between 2008-2011. She worked at a psyche/dementia ward as a nurse during the time of those songs, and drew a lot of influence from her surroundings.

Most of the songs were written for projects like My Flea Circus + Goldie Luxx, etc, however little promotional effort was used, as they were mostly just for fun + for friends and were performed at local clubs and venues in Toronto's thriving music scene at the time. Nee's writing style is evident in Fox Medicine and throughout the former projects, but continues to be curiously unique and peculiar. This section is an homage to that timeframe and songwriting phase and comes with visuals + vids! Website here. Bandcamp here. 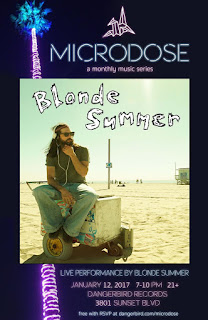 Background - Dangerbird Records announces Microdose, a monthly single release and live event series celebrating new music from our neighborhood (LA's Eastside) and beyond. This platform will serve as a launchpad for up-and-coming artists, uniting and expanding our artistic community.  Monthly singles will include an A-side and B-side, and each artist will perform live at Dangerbird's Silver Lake based HQ/event space.

The A Side “Beer On Ice” and B Side “Sha La La” are both returns to what Chris Pope, the band’s mastermind, does best. Telling stories thru fuzzed out vocals, of Lazy Days, Wanderlust and Liquor Store Romances.  The band’s stripped down approach to the Beer On Ice single is a departure from last years electronic infused Paradise e.p., resulting in a truer brand of rock that Blonde Summer fans have come to love over the bands 6 year, 4 e.p. career.

Blonde Summer’s Chirs Pope admits “there was a bit of hibernation” following the Paradise e.p. A necessary period where the band could get back to their roots. Hang out with their girlfriends, find jobs, quit jobs and get lost.

'Beer On Ice' has a cool almost lazy laid back rock'n'roll feel, that occasionally likes to pack a riff or two of full on energy into your ears.