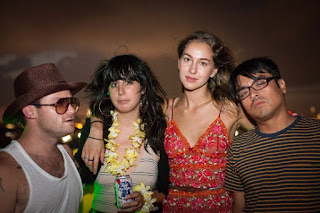 Background - Rosebug is yet another punk band from Brooklyn, and they want you to hear their album. Perhaps they don't have the most original origin story, but that doesn't mean they're not worth listening to. Their debut LP, Worst Way was released in November through Dazzleships Records, is thirty minutes of distress and pretty petulance—wrapped up in a bow. The great thing about Rosebug, though? They’re in on the joke. By the time the words find the music, lead singer Becca Chodorkoff is already over it. Or, at the very least, she wants you to think that she is. Currently the band is sharing their buzzworthy new single, "He Doesn't Know," the follow-up to the critically acclaimed piece, "I Am The One."

Worst Way was produced by Miles B.A. Robinson at a Bed-Stuy studio called The CRC. The space is owned by indie darlings, Chairlift, and frequented by the likes of Dev Hynes and MGMT. Rosebug's current line-up consists of Becca Chodorkoff (vocals), Chris Nunez (guitar), Tarra Theissan (bass), and Drew Adler (drums). You’ll want to get to know this band, because, with Rosebug, it’s fun to be sad. Facebook here and Website here.

This is the second song from the band on Beehive Candy, following on from our early November feature and this time we have 'He Doesn't Know'. This track is a little more alt rock than punk, and once again positions the band firmly on our radar. 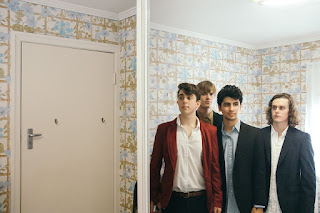 Background - ‘Get Away’, the debut single for Brisbane band Vertigo, is a spirited song driven by a dynamic bass line, sharp stabbing guitar riffs, powerful drums and an intense vocal line. The layers of guitar create a punchy and atmospheric sound, and the up-tempo beat captures the energy of the band.

The song’s lyrics, written as a group during one of the band’s first formal rehearsals, are a reflection of watching a friend hold onto a poisonous relationship. Referencing The Beach Boys, and teenage love, the song is a plea to leave negative relationships behind.

Vertigo’s music came to life under the guidance of Yanto Browning whilst recording at Airlock Studios over an intense four-day period, where the band recorded numerous songs, but identified ‘Get Away’ as the most appropriate debut. Playing living rooms, backyards and small Brisbane Fortitude Valley stages, progressively growing crowds have come to enjoy the band’s raw love of playing music together and entertaining people of varying musical tastes.

Vertigo are currently writing and playing as much music as they possibly can and are hoping to release more music soon. “Get Away” by Vertigo is available now via digital stores. Facebook here.

With a tight rhythm and lively and fresh soundtrack 'Get Away' has the foundations in place for some fine and feisty rock'n'roll complete with urgent and passionate vocals.