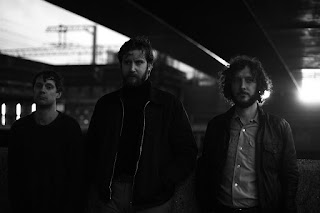 Marlon Brando Island - A Troubled Past.

Background - The origins of Marlon Brando Island lie in the prolific bedroom recordings and determinedly DIY ethos of vocalist and guitarist Marcus Fulcher, whose up-and-at-’em attitude would soon establish him as a notable presence on London’s solo singer/songwriter circuit. However, it took the muscular contributions of Marco Testa Ryan (drums) and Edward J Thorpe (bass) for Fulcher’s sprawling, widescreen songs to realise their full potential. The London trio’s aggressive, experimental, innovative post-punk output has been variously likened to artists as diverse as Shellac, The National, Cloud Nothings, Talking Heads and Future Islands.

The glue that binds these disparate influences into a cohesive and intoxicating alt-rock unit is the band’s shared belief that music can be transformational, that it should make such an impression on the listener as to change them for ever. And with a sound as stimulating as Marlon Brando Island’s, that change will only be for the better.

About ‘A Troubled Past’ “When that part of you died, did you feel nothing?” A gritty blast of passionate post-hardcore, where an abrasive six-string arcs across a pounding bass and drum track that strains under its own sense of urgency, ‘A Troubled Past’ delves into themes of apathy and self-righteousness, inspired by frontman Marcus Fulcher’s experiences as a support worker. “I was always appalled but equally fascinated by how inept yet at ease people were in just losing humans between the cracks,” he explains. “It was frightening how that gets rationalised.” The track’s rawness lies in its original conception as a demo, before South London producer Paul of Sound (Goat Girl) turned it into something altogether larger. Yet it retains an exposed feel, leading to an effect both unsettling and ecstatic. ‘A Troubled Past’ makes its mark as an ode to the lost as well as an exhilarating call to arms. Facebook here.

Energy and passion combine with 'A Troubled Past' a sub three minute rocker, that cuts to the chase and left me hitting the replay button straight away. 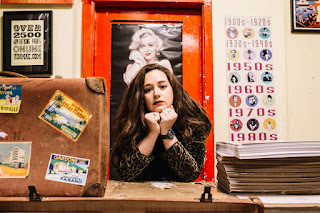 Background - Essie is the stage name of alt/rock guitar player and vocalist Essie Laugharne from Perth, Western Australia. Her signature sound is a confident mix of bluesy guitar chops and soaring vocals.

Essie's debut EP Run Red and single “Sugar Rush” drew on an earthy mix of influences from The Black Keys, U2, and Gin Wigmore, as well as Australian talents Little Birdy and Eskimo Joe. Hailed in press as “Alternative rock with a superb 70s twist”(Fireworks Magazine), the success of these DIY releases prompted Essie to relocate to London in 2015 to pursue a career in music.

Essie’s new single “Someone” will be released in March 2017 through The A&R Department. This song was written in Essie’s university days, and re-vamped with a fresh set of lyrics during her work with The Animal Farm in 2016. “Someone” was recording at The Animal Farm studios in South London, by Jamie Dodd, with all music and lyrics written by Essie Laugharne and Ben Pohlmann.

“This song is a typical breakup story, but with gritty undertones of the sorrow and melancholy that can come with the territory.”- Essie

“Someone” draws influence from the Arctic Monkeys AM album, as well as Band of Skulls, coupled with Essie’s typical Amy Winehouse inspired vocals. It’s as raw as any heartbreak, which suits her trio style performances well: the simplicity of growling guitar riffs, punchy drums, and backbone bass, with vocals soaring overhead.

Performing with her trio, Essie is a regular in the UK capital's clubs, where she is building a devoted fan base enthralled with her raw, confessional songwriting and assertive blues guitar. Her mini EP titled Not Easy was released on The Animal Farm label in September of 2016. Website here, Facebook here.

A little mix of funk and bluesy vocals add to the chemistry as 'Someone' an alt rock song hits the spot, and builds from there. 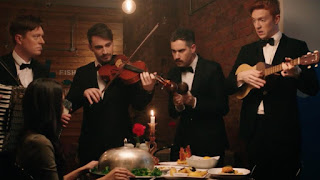 Artificial Pleasure - All I Got.

Background - Following their explosive arrival to the scene last year, London quartet Artificial Pleasure have shared their follow up track ‘All I Got’ which has earned the band yet another rush of acclaim. A disco-infused track with shades of Bowie, ‘All I Got’ has been noted for its modern twist that sends an honourable nod to the past.

Now Artificial Pleasure are ready to present a brand new video for their latest single ‘All I Got’. The track is taken off their forthcoming EP ‘Like Never Before’ which follows on April 21st. They band will also play their debut headline show at The Camden Assembly on April 25th.

Directed by the band’s previous collaborator Dylan Holmes Williams (Huntar, O Chapman), the video for ‘All I Got’ moves in surprising directions with a mad chef, camp theatricality and vibrant dance moves all contributing to its surreal visuals. Actor and West End figure Sebastien Torkia (Sweeney Todd, Guys and Dolls, A Streetcar Named Desire) stars as the demented chef who is determined to win over his diner’s date at all costs. Website here, Facebook here.

A fabulous video needs a song to match and 'All I Got' more than achieves that requirement. High Octane rock'n'roll that is delivered in an effortlessly cool manner, and head turning vocals ensure this is a song that will and is getting noticed. 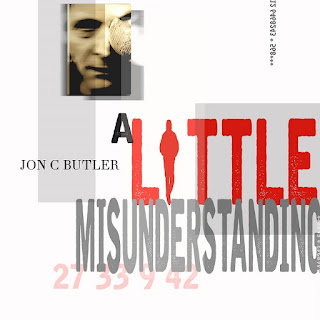 Background - 'There has been a misunderstanding hasn’t there?' laughs Jon C Butler. 'I mean, we all know it isn’t meant to be like this and maybe there should be a reassessment of the deal.

Although we all start out in life with good intentions and kind hearts, things don't always turn out as we hope.

Maybe life has taken us down one too many roads less travelled. Or it’s thrown us a curveball when we needed an easy catch. Or perhaps we flew too close to the sun. Or we made a wrong choice at the crossroads.

We can't go backwards, of course. Carpe Diem! But, sometimes, when we take a quiet moment of reflection to make sense of our life, we're allowed to wonder if perhaps there was a little misunderstanding somewhere along the way.’ A Little Misunderstanding is available from 14 April 2017 on Strataville. Website here.

Well I have had more than a few of these down the years, 'A Little Misunderstanding' is a refined alt rock song with just a hint of Americana about it, and plenty of hooks to pull the listener in. 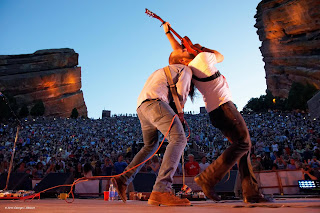 Background - Strange Americans share the video for their track "No Punches". "'No Punches’ explores the relationship between the American Dream and the American Reality," the band explains, "...few of us question the meaning of work, what purpose that work is meant to serve and what direction it will take us in life." The track is from their forthcoming new album, 'Borrow You, Brother,' out later this year. This Saturday April 1st, the band will headline a hometown show at Denver's Hi Dive.

Musically, Strange Americans’ third full-length album, 'Borrow You, Brother' remains committed to the general guitar-driven, blue-collar Americana rock element that permeates their earlier releases. This latest album, however, diverges in subtle ways : from the keys to the drums, bass and guitars, the sounds, tones and parts are more explorative. At times this means dynamic restraint, craft, control and beauty ; at others it means total freedom, chaos and noise.

For the better part of a year, the Denver, CO band made three trips to The Echo Lab in Denton, TX, where they worked with engineer/producer Matt Pence (Centro-matic, Justin Townes Earle). Pence’s penchant for the creative process combined with the band’s original vision for the songs drove the tracking and mixing process and resulted in a unique record that is simultaneously novel but grounded in tradition. Lyrically, the songs tend to explore social themes including income and wealth inequality, individual success and materialism, but also work, travel and happiness.

It’s a little raw, a bit loud, unapologetic and honest. It’s blue-collar rock and roll and it’s something that Denver’s Strange Americans are crafting with both brawn and finesse. Facebook here.

'No Punches' has a well travelled and developed feel, the band are tight and the vocals laid back, however between them the passion and commitment is all apparent, in what is just right rock and roll.