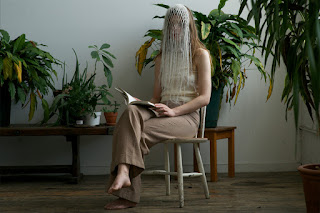 Background - JFDR has released the video for "Instant Patience", directed by Samantha Shay and filmed/edited by Victoria Sendra. "Instant Patience" is the fourth video from JFDR's debut album 'Brazil'. Prior videos were Airborne, White Sun and Wires. When talking about the track/video JFDR stated, "Instant patience was written trying to channel my inner triangle - making a song out of three chords in a loop.

The lyrics are taken from love letters i received a long time ago. It's about randomness, connecting with someone, knowing you'll see them again.but that's the idea of instant patience- it's really a paradox, taking all meaning from the word patience and leaving the listener quite confused. The arrangement and production was stitched together by Shahzad Ismaily and composer Úlfur Hansson, who produced electronics on top. The music video was this complete trust exercise.

I went into the desert with wonderful creatives I had never met before. they asked me to trace the stark landscape with my hands, eyes, nose and elbows. they asked me to jump into the ocean when I didn't know how to beat the current. I asked them to make it black and white, so nobody could know the colours but us." Brazil will be released on March 17, 2017.

JFDR, the latest project from Iceland's Jófríður Ákadóttir (Samaris, Pascal Pinon, Gangly), is a blend of cyclical guitar parts, soft minimal soundscapes, and poetic wanderings of a journey that ends where it began. Drawing from classical, folk, and electronic backgrounds, JFDR amalgamates the sounds of changing seasons, her voice a current that moves through rough seas to smooth waters. But perhaps JFDR shines the most in her capacity as a wordsmith, employing rich imagery to evoke the subtle emotions embedded in each song. Facebook here.

Delicate and minimalist it may be however 'Instant Patience' is heavy on atmosphere and beauty. Another song where art and music combine, something that is increasingly a hallmark of Icelandic artists. Please feel free to join me in checking out all of JFDR's other material. 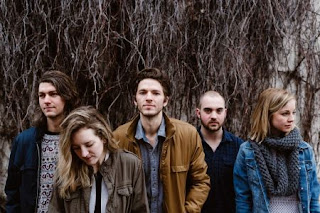 Background - The grey inconclusive nature of life felt paralysing at times this year. In the midst of liminal spaces, fidelity was a reoccurring hope where there weren’t conclusions.

Our hope for these songs is to invite you not into certainty, but into devotion to hope. A place we tried to operate in despite not being able to know or see the full outcome of that devotion. These are the poems of our year of “Grey Fidelity”. Facebook here.

Whilst I have nothing currently available to share from the new album, rather than tease you by saying just how wonderful all eleven songs are (and they are) I thought I would share a more recent video from Tow'rs in the shape of 'Helm'. At least this way you get an idea of just how good their songs really are. 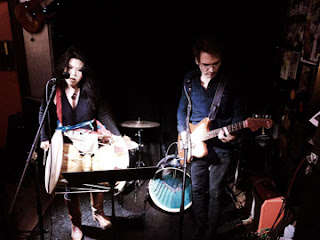 Background - Charlie Nieland tells us "I'm in a duo called Lusterlit with Susan Hwang.  We are part of Bushwick Book Club, in Brooklyn, a rotating group of songwriters and performers of all kinds putting on regular shows featuring new music, art and snacks inspired by a chosen work of literature. Susan founded it in 2009 and I've been a participant since 2013. Susan and I have been playing and recording together for several years and we released a couple of albums that I produced in the fall (Hopeful Monsters and  Everything Is Sateen: Five songs inspired by Vonnegut) and formed Lusterlit to perform our songs about books. We alternate lead vocals and harmonies while supporting each other on guitar, bass, synth, traditional Korean drum, accordion and more. Lusterlit toured the West Coast in November from Seattle to LA playing book related events and regular sets along the way.

Now we've completed or first EP as Lusterlit called List Of Equipment. Bringing our songs written for Bushwick Book Club to full technicolor life in these widescreen productions, Susan and I have made some studio magic with music ranging from indie rock to soul to shoegaze, reminiscent of PJ Harvey, Nick Cave and more. They're inspired by the books: Mastering The Art Of French Cooking - Julia Child, Blood Meridian - Cormac McCarthy, The Fortress Of Solitude - Jonathan Lethem and The Day Of The Triffids - John Wyndham.

I think you'll love the cinematic first track "Ceremony", inspired by Blood Meridian, which we wrote for the Seattle chapter of Bushwick Book Club when we were touring. Or the fierce, funny and dark "List Of Equipment". Or the 90's inspired alt of "Genius Of Love". Bandcamp here. Facebook here.

Charlie Nieland and Susan Hwang (Lusterlit) may be a duo, however they create expansive music that is beautifully layered as the melodic song 'Ceremony' demonstrates. The first EP comprises of five very individual and diverse tracks, sometimes more energised or a little darker in tone, but always intriguing. 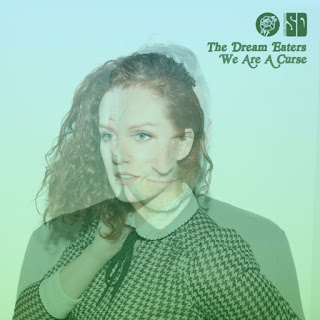 The Dream Eaters - We Are A Curse (Forthcoming Album).

Background - The Dream Eaters bring skin-tingling harmonies together as a dream-pop duo like no other. Blending the vocals of Jake Zavracky and Elizabeth LeBaron, their music will envelop and transform you. Formerly known as simply Jake and Elizabeth, the duo’s sound has evolved from classic shoe-gaze roots to a stripped down, dreamy and ethereal vocal focus. While they draw from a number of influences including dream pop, psychedelic, folk and rock genres, their sound stands in a category of its own, focused around the core of harmonious and haunting melodies.

The Dream Eaters story originated in 2015. After playing clubs with various projects and toiling in obscurity for years in his hometown of Boston and later New York City, Zavracky decided to give up the musicians dream and stop performing completely. Then, while working as a bartender at a dive bar in Brooklyn he met LeBaron, another bartender who had just relocated from Vancouver Island, BC. Discovering that they were fellow musicians, they began to collaborate and found an instant connection. As a composer and producer, Zavracky began writing songs for LeBaron to sing alone but soon found their voices blended together in harmony to create a wholly unique sound. With friends and a growing fanbase providing support, they released a number of EP’s and performed live as “Jake And Elizabeth.” As they began to further define their sound, they began performing under the name “The Dream Eaters.”

Their self-produced debut EP, Five Little Pills was released on June 23, 2016, as the first official release under their new band name. A bare-bones production that they self-recorded and released, it provided the precursor of solidifying their new sound and establishing the process they would use to record their first full-length debut album, We Are A Curse. The album is slated for release in late spring (April 14th). Website here, Facebook here.

Again at this moment I can only tell you how fabulous The Dream Eaters forthcoming album is, however I can share their debut EP from last year. Taking nothing away from their first release, the new album seemingly upgrades every aspect of their music, in part because of the stunning production. As demonstrated by the EP, melodies, vocals and harmonies are the cornerstone of the music. Everything has a natural and sometimes quite personal feel running through the songs, where dreamy vocals are never far away. 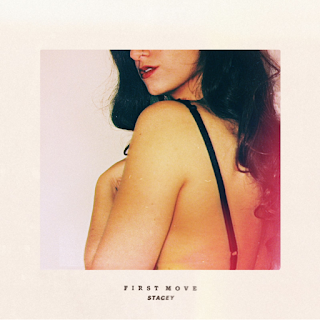 Background and we quote - it breathes
like the character of its narrative;
with hesitation
& warm swells of choral pleasures

'First Move' is a slow melodic pop song with masses of feeling. A minute or so in to the track and the words above begin to make sense and poetically describe the musical journey you are on. 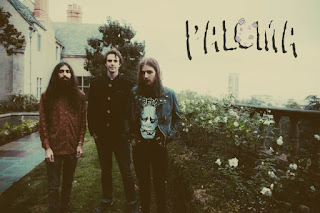 Background - Paloma have shared new track "Touch". "It's about a diamond in the rough," the band explains, "Somewhat of a tramp. A certain someone who didn't quite know how to believe in them self. Until he meets this princess of sorts that did. When they both turn to real life, he's banking on the idea that we're only half way through the film. That the story isn't finished yet." It's the first song released from their upcoming debut EP, Luna, out this April 28th

Paloma was born of the struggle to navigate the harrowing societal construct typical of suburban Los Angeles. It is the answer for learning to balance the need to make ends meet while expressing the irrepressible creativity brooding inside. The band officially began in a small bedroom studio with several ideas being deconstructed over and over again as every artist can relate to. It wasn’t until Nick and Victor invited the masterful keyboardist and local legend Steven Doman to the studio that the band finally grasped the scope of their newly created sound. In a place where one’s inherent value is often picked apart according to attributes of wealth and beauty, Paloma is truly an escapist’s musical paradise. Paloma is Victor Martinez, Steven Doman, and Nick Mariotti. Facebook here.

A smooth flowing alt rock feel with hints of psychedelic influence make 'Touch' a captivating song right from the word go. Vocals drift above the soundtrack adding some melody and even more feeling, in this blissful piece. 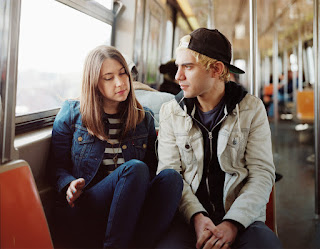 Originally self-released a couple years ago, Paper Garden is excited to announce the re-issue of the album, "Forever For Sure," this coming Friday, March 3rd.

To coincide with the release, Laura & Greg will be performing a free show at Chelsea Market in NYC as their official record release show - in conjunction with our ongoing "Chelsea Nights" concert series. Facebook here.

'Muscle Memory' is the first of eleven tracks on the bands 'Forever For Sure' album. Re-issued today by Paper Garden Records, a label that has a knack for finding some vibrant artists, I'm glad they did with Laura and Greg as this is a dazzling selection of songs, as the featured track demonstrates.