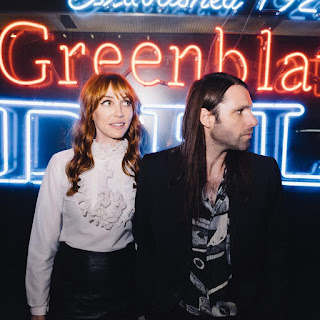 Tashaki Miyaki - Out Of My Head.

Background - The Los Angeles-based duo Tashaki Miyaki will release their highly anticipated debut album The Dream on April 7 via Metropolis Records. This week the band wrapped up their residency at the Echoplex in LA and now shares the album's third single "Out Of My Head". Here's what the band's Paige Stark said about the track:

"It's a song about wanting to shut off my mind. I suffer from various anxieties and depression that can become exhausting. As John Milton says in Paradise Lost,  'The mind is its own place and in itself, can make a Heaven of Hell, a Hell of Heaven.' Musically I wanted it to feel the opposite, soothing and expansive...like a daydream."

Tashaki Miyaki have toured and played festivals across North America, Europe and the UK. The band has also performed at art museums around the world, including The Centre de Cultura Contemporània de Barcelona and MoMA, New York.

Tashaki Miyaki has spent the past couple years writing and recording their debut LP, The Dream, produced by Singer/Songwriter/Multi-Instrumentalist Paige Stark and engineered by Dan Horne (Cass McCombs, Allah Las). As a writer for The Fader once observed of the band’s hypnotic sound, “It's so pretty I’m afraid saying anything else might diminish it". Facebook here, Bandcamp here.

'Out Of My Head' is the third track we have had the privilege of sharing this year from Tashaki Miyaki. With the album due out this coming week it's another reminder of what a fabulous collection of songs is in store from the band. 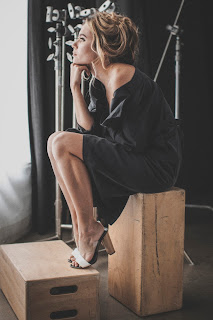 Swimming in a dreamy sonic world that pulls reference from French icons, Brigitte Bardot and Francoise Hardy, Livia opens her heart in ‘Amour Amour’ singing about pain, gain and seduction in the game of love.

'Amour Amour' is written as a love letter, spoken with simple and disconcerting sincerity and sung in her native French. Love hurts - we have all been there, but no matter how bad it gets, just one kiss and all is forgiven.

‘Amour Amour’ is the first of several releases, scheduled for the first half of 2017 along with several live dates. Facebook here.

She might be based in Brooklyn, however that has done nothing to diminish Livia Blanc's beautiful French pop sensibilities. 'Amour Amour' is full of the imagination and vivacious I associate with female French pop artists going right back to the 1960's. Love it! 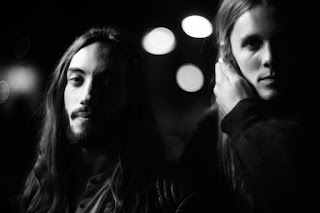 Background - Free from the artificial processing that most rock go through nowadays, and possessed by an attitude many thought was fading from music like a dream in the light of morning, ‘Am I Evil’ is a septic jaunt back to a time when things weren’t so mercilessly sanitised and lobotomised. Dinosaur riffs abound, the likes of which maestros like Jimmy Page or Jack White have dedicated their lives to searching out, and Odd Couple use them to question their unhealthiest and most intrusive thoughts.

Since arriving in Berlin six years ago to a revolving circus of hepcats, drugs, and trendy hangouts, Odd Couple duo Tammo Dehn and Jascha Kreft, (two kindergarten pals from Ostfriesland), still feel out of place. Perhaps it’s typified in their name - an assertion of strange outsiderness, but together the duo weave a kind of art that dredges up the nuggets of rock’s dinosaur past and infuses it with a thoroughgoing modern approach to recording sound. When the duo started working on their debut It’s A Pressure To Meet You, released two years ago, their style was still very much in its embryonic stages. Now for second album Flügge (meaning “independent” or “to spread one’s wings” in German), the band feel like they’re taking another shot at the start.

Shearing their sultry garage-rock archaisms in favour of a grander, looser, style that takes influence from hip hop and the kosmische musik experimentation of West Germany in the seventies, Flügge is a different beast entirely, and one which Germany, and the wider world, hasn’t heard the likes of yet. A mouthpiece for millennial disaffection, Odd Couple’s new album brims with introspection and self-discovery. It’s a clever dissection of the things making our generation unhappy, and a nod towards the possible solutions in store. Mostly though, it’s a profoundly hard-hitting and deftly-delivered sonic assault that paves the way for a new rock renaissance. Odd Couple are everyman and everywoman, living in these dangerous times with the fear of uncertainty, but hell bent on spreading their wings and soaring high. Website here, Facebook here.

Our second featured track from Odd Couples soon to be released 'Flugge' album is 'Am I Evil'. It's another riff fronted, guitar meets thundering drums track, with the vocals immersed in the mix and adding to the real rock feeling. 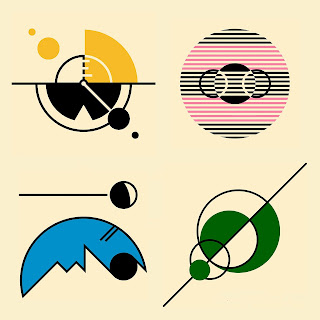 Emma Ballantine - Through Your Eyes.

Background - Emma Ballantine launches full Somebody's Story EP. A project to bring to life true stories from people around the world has been completed today with the release of a new track from British singer songwriter Emma Ballantine.

Through Your Eyes - the fourth and final track from Ballantine's Somebody's Story EP, offers a glimpse of the world as seen by 14 year-old James, who has autism. Based on a story submitted by James' mother Nancy, the song credits James as a co-writer and features samples from his own music, created with Baltimore-based producer and beat-boxer Max Bent.

Released ahead of World Autism Awareness Day (2nd April), the track combines elements of James' track Don't Bore Anyone's Ears with layered synths and subtle backing vocals to create a powerful and expansive soundscape to conclude the four-track record. Emma adds "From the moment I read James' story and heard his music, I knew I had to write a song that captured the wonderful way he sees the world. I hope it challenges preconceptions and shows that perhaps people with autism have a clearer appreciation of things and a deeper wisdom than people without. »

The EP, recorded with Brixton-based producer Moseley, will be released via iTunes, Spotify and other digital platforms, and Ballantine will mark the launch with a performance at The Green Note in Camden, London, on Sunday 9th April. The previous three tracks in the series have brought to life stories including a 7,000 mile journey to Kenya, inspired by love at first sight (Astronaut); a chance encounter in a dive bar in Chicago (Harmonise); and a young girl's determination to move on with her life after a harrowing court case (Secret Tunnel).

The full stories behind the tracks can be found at www.somebodysstory.com. Somebody's Story EP is now available on all digital and streaming services. Website here.

Somebody's Story is a beautiful EP, from which we can share 'Through Your Eyes'. The song has a modern folk feel to it, melodic and gentle and incredibly personal.