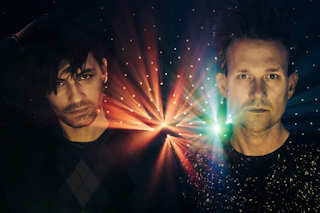 Background - Like a synesthesia-induced landscape found within the vivid worlds of films a la Tron or The Neon Demon, Austin + Houston duo Night Drive arrive today with the scattered and lo-fi visuals for their track "Rise and Fall". The group are also thrilled to announce their debut self-titled record, due June 16th via Roll Call Records.

Inspired by sci-fi cinematic landscapes, the duo's modern synth-pop seeks to explore the darker currents of abstract emotion. With infectious melodies wrapped in thoughtful lyrics, layered over pulsing dance beats, the group create an ethereal electronic world drenched in noir aesthetics. With the handful of tracks and remixes they've released, the duo's dreamy songs have already garnered attention from the likes of SPIN as well as causing a stir from tastemakers in the blogosphere.

Night Drive's self-titled debut album brings to mind the aesthetics of acts like Interpol or The Knife, and is an effort best consumed in it's entirety. From the John Carpenter-esque stylings of hazy album opener, "Hyperion" to the urgent synth of "Strange Telepathy" or the slow-burning and subtle "Ghost Craft," from start to finish, the LP is a textured soundscape and surreal journey through sound.

'Rise and Fall' mixes an uptempo, synthy and layered soundtrack, with vocals that also seem to convey a sense of urgency. It's a little like OMD only with more grit and menace. 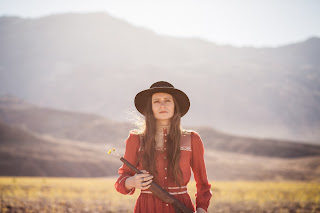 Background - The Little Miss to release rootsy single “Doubt” April 4th. From the first fuzzy guitar line to organ and to the final fade out, “Doubt”, is relentless. The Little Miss’ new single blends Americana, Fiona Apple and possibly a little White Stripes for a passionate, rousing exploration of self-doubt. The single will be released digitally April 4th. In the words of The Little Miss: Doubt concerns itself with the intellectual understanding that life's answers cannot be summoned, but takes note of the relentless desire to still call for said answers. Essentially, it's about asking questions that you know you will never have an answer for (i.e. "I pray every day and I pray every night, but I'll never know if I am getting it right. Or will I?").

With one foot in the modern era and the other firmly planted in the nostalgia of decades gone by, The Little Miss is a Los Angeles based musician with roots in jazz, blues and folk music. She will be touring the West Coast later this year to support her upcoming EP, "American Dream," recorded and produced by Echo Park local, Joel Jerome. In addition, this will be her first year performing at the Bradley, California-based music festival, Lightning in a Bottle. Hayley Johnson, AKA The Little Miss, is a twenty-six-year-old, folk singer-songwriter originally from San Diego, CA.

Having been inspired by female vocalists such as Fiona Apple and Jewel at an early age, Johnson can remember starting girl bands at recess and writing lyrics in notebooks beginning in first grade. In middle school, Johnson began performing original music around San Diego county with her father at local coffee shops and surf competitions. Having gone by the stage name, "Hazel," for many years, Johnson developed the idea for The Little Miss while in college at San Francisco State University, where she rediscovered her love of music by way of her studies in Philosophy. After graduating, The Little Miss took off down south to further pursue her love of folk, blues and classic Americana music in Los Angeles. She now resides in Echo Park with her dog, Winifred, and continues to start girl bands at recess. Website here, Facebook here.

From the opening notes 'Doubt' suggest your in for some bluesy passion and energy, and the song does not let you down. Vocals are wonderful combined with the guitar lead music which remains potent throughout. 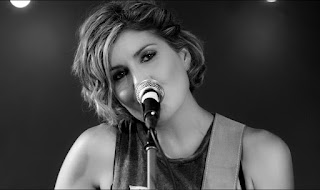 Karin Page - Still Got You.

Background - Upbeat and irresistibly catchy, Karin Page's latest single Still Got You is a perfect slice of folk pop, dressed up in her favourite embellishments of rootsy grooves and a dusty twang. Taken from her 2017 EP of the same name, Still Got You (produced by ARIA award winning producer Matt Fell) shows why Karin appeals to such a broad range of music lovers – seamlessly weaving several styles together – and is the perfect introduction for new fans.

After 18 months of touring Australia in a caravan with her music/life partner Adam Nyeholt, playing music wherever the road took them, singer-songwriter Karin Page finally arrived at her new home of Byron Bay in 2016. By then, her charming blend of rootsy Americana had already begun making waves around Australia –  emanating from her hometown of Perth – earning Karin a slew of awards and loyal fans in every town she visited.

Karin's nomadic lifestyle has deeply affected her music, which now bears all the character of the endless Australian road. Needless to say, this has made Karin very popular with country, blues and roots fans. Karin took out Female Artist Of The Year and Songwriter Of The Year at the 2017 WA Country Music Awards; she was nominated for a WAM Song Of The Year Award in the Blues And Roots category; she has been nominated for New Artist Of The Year at the 2017 CMC Awards; and she was crowned the 2016 Toyota Star Maker. It seems the harder Karin works, the more her accomplishments are met with recognition.

In support of Still Got You, Karin will be embarking on a slew of dates including a co-headline tour with new pal and talented folktronica artist Tobias. Karin says of the hook-up, “I met Tobias at The Tamworth Country Music Festival in January. I first discovered his music when we were both sitting in the Top 5 of the AMRAP charts. I instantly loved his style and thought our music would work well together on the road." Facebook here. Tour dates on Beehive Candy's tour page.

There is a classic roots vibe with 'Still Got You' that is oh so, hook laden. Vocals are melodic and have some edge, the music plays it's part with a tight and polished delivery. 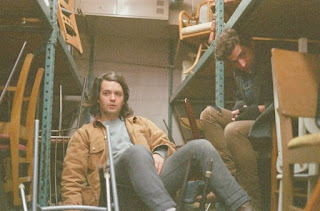 Background - Winstons Share "Enough" Video, Single Out Now on Grand Jury/WarHen Records. It follows their first single "Without You". Both tracks will be part of a release slated to come out later this year. The band released two EP's in 2015 entitled 'Turpentine' & 'Black Dust'. Both "Enough" and "Without You" are available via Grand Jury records.

Winstons is a garage-soul duo out of Virginia, residing in Brooklyn. They do love songs, blue songs, and dance songs with drums, guitar, harmonies, and a harmonica. Their live show is raw and earnest, with a dynamic juxtaposing devotion and depravity. Their sound has drawn comparisons to Screaming' Jay Hawkins and The Cramps. Website here, Facebook here.

Our second feature for Winstons, this time we have 'Enough' a blues rock number that packs passion and energy in equal amounts. The band keep it simple, and allow their total commitment to do the work. 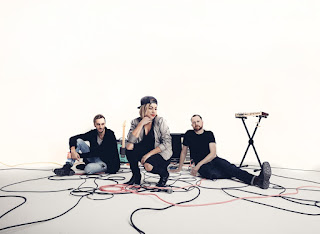 Background from Monarch - We just released our new single “Remember Me”. The three of us come from widely different musical backgrounds, from indie rock to classical to R&B. But when we got together to jam in 2015 we all quickly realized our shared love of synth driven 80s pop-rock and Monarch was born - a mixture of the lush pop harmony and hooks of that era along with experimental modern sounds.

Everyone added their own flavor to this new track, “Remember Me”. Creating the music had to be fun and familiar but with a twist. We wanted to keep it authentic and musically challenging yet lighthearted. Greg brought live classical percussion elements, Ryan, rock guitar and synth solos, and Maya wrote lyrics and stacked those harmonies ten deep - all while keeping common goal - keep the jams sounding like a tropical summer breeze in 1984. Facebook here.

Melodic vocals and a rhythmic backdrop ensures that 'Remember Me' stands out. Add in the synth sensibilities and you have a very catchy song.