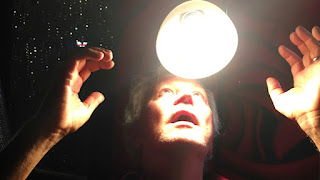 Guided by Voices - Just To Show You.

Background - Guided by Voices new album How Do You Spell Heaven is set for release on 11 August 2017. Guided By Voices is on a roll. You could argue, but please don't because I have a headache, that GBV is never not on a roll, that Robert Pollard's output plows past the word "prolific" like prolific is standing still in a snowbank; and that's true, but this new version of the band (Doug Gillard, Bobby Bare Jr, Mark Shue, Kevin March) has given Pollard new tools to complement his song-hammer. Thus, ergo, quod erat demonstrandum: roll.

Hot on the heels of the smothered-in-plaudits double album August By Cake comes this hot and heavy fifteen-tune long player, a melody-dense thwack to the earholes that will both energize you and deplete your body of its remaining music-appreciation enzymes. Recorded by the band in New York, and by Bob in Ohio, How Do You Spell Heaven capitalizes on the current incarnation's tour-buffed shine without sacrificing eternal GBV verities such as but not limited to: off-kilter rhythmic jolts; krazy chords; purposefully imperfect harmonies; and fragmented structures that start and stop on a coin of small denomination and go somewhere else, and quickly.

For example: Leadoff track "The Birthday Democrats" features a surfeit of pop hooks and swaggering sure-footed wordplay before dissolving like a perfect dream into Beatles-esque sound collage. "King 007" starts off like an acoustic demo from Tommy before shifting gears into a galloping riff-driven hyperspace guitar battle, before pivoting back to some kind of weirdo hybrid of the two… and then stops short just when you think you've got the thing pinned down. "Pearly Gates Smoke Machine" opens like the best thing Marc Bolan never wrote and then stubbornly refuses to cohere into an actual song, instead serving as a platform for some entertainingly normcore guitar pyrotechnics, while "How To Murder A Man" channels David Bowie channeling Scott Walker. Is this enough? Is it ever? How about "Nothing Gets You Real," a deceptively straightforward breezy number that sounds like Pollard looking back at his life-in-rock and nodding, with a melancholy smile, at past versions of himself. It'll make you cry, if you have a human heart.

There's more, much more, but you know that already. The easiest, laziest way to sum up Guided By Voices' latest album, the move we can't fail to resist making, is the most obvious: How do you spell heaven? Shout it from the rafters: G-B-V. Website here, Facebook here, live dates on Beehive Candy's tour news page.

I just do not know how Robert Pollard and Guided By Voices, continue to be so inspired, creative and able to produce the quality and quantity of music, that has spanned their career. For me the new song 'Just To Show You' sits somewhere in the alt rock genre, it's melodic and devoid of any unnecessary extras, and at the same time fresh and pleasing. Another album is on it's way, and once again I am full of anticipation. 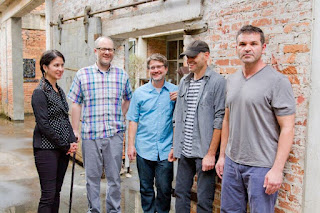 Background - Atlanta-based Parsons Rocket Project has announced they will be releasing their self-titled debut EP in August. Comprised of six tracks, this is a beautiful mixed bag of dream-gaze, indie rock and space rock. For now, they are previewing their first single 'Exit Launch', which occupies a sweet spot between Blonde Redhead, My Bloody Valentine, Bowery Electric and Slowdive.

The band laid down the tracks for this album in the very studio where Benjamin Price has also worked on releases by Gang of Four and The Hives, among others. The album was mastered by Joe Lambert (Lou Reed, Animal Collective, The National, Hot Chip, Deerhunter, Panda Bear, Washed Out).

his debut EP represents a significant moment in time for the band, who were challenged to overcome very real struggles involving drug abuse, a terrible automobile accident, and the low-level daily drama of domesticity. Some of the ambient and psychedelic exploration is rooted in real trauma – both physical and emotional – while some of it is celebratory in nature, rooted in the unique awareness of a temporary conscious being in our universe.

'Parsons Rocket Project' will be released digitally on August 11, with vinyl to follow via the New Texture label. The digiital version already available for pre-order via Bandcamp here, Facebook here.

'Exit Launch' is the first of six tracks on the bands debut EP due in August. The band are clearly comfortable and capable of taking songs in different directions, whilst maintaining a core overall sound or style, that is easily identifiable as theirs. The featured song is a fine indicator of Parsons Rocket Project quality and imaginative music, the EP adds more depth and substance, as debut's go, this is something for the band to be proud of. 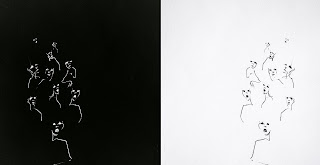 Background - East London-based singer, multi-instrumentalist and producer 1403 has been something of an enigma over the past few years.

Popping up in various guises writing and collaborating with artists such as Sasha, Disturbing London's G-FrSH and Cypress Hill to name a few, he has also contributed to various film scores and advertising campaigns across a wide range of genres and styles.

During this time, he was introduced to Grammy Award Winning Philadelphia based producer Joe ͚The Butcher͛ Nicolo (Fugees, Billy Joel, Lauryn Hill). The pair quickly formed a unique bond which has seen 1403 travel to the US on several occasions over the past couple of years to transform his solo demos into studio recordings.​ Facebook here.

'Tonight' mixes intimate vocals and initially, a stripped back acoustic musical soundtrack. As the arrangement builds, it adds another layer of melody, whilst supporting those beautiful and enticing vocals. The overall effect is wonderful, this is a track that suggests some very good music will follow.