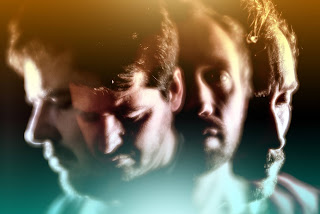 A Shoreline Dream - Room For The Others.

Background - Colorado’s A Shoreline Dream have revealed the video for their single ‘Room For The Others’. This is the fourth track from their ever-evolving new album, with each being released digitally as stand-alone singles, one at a time.

The video features a somewhat distorted and dream-like vision of the current state of self expression. Featuring Denver's live performance duo Scissor Sweethearts, the video is somewhat of a sequel to ASD's 2016 video 'Revolvist', in that it takes both Serana and Siara past their performance element and on the streets. As the sweethearts prepare and leave their domain feeling confident in themselves, we see how the public reacts to even the slightest "out of the ordinary look" in an increasingly more stereotype driven society.

Featuring layers of the band, dream sequences and textures, the video comes together similarly to the production of the music itself. Hazy, vivid and surreal. "Given the nature of all the amazingly overwhelming things going on these days politically, socially, etc., this track became a personal reflection on it all. Both the good and the bad. The love and the sadness," says Ryan Policky. "I found myself feeling emotions from all sides of the spectrum, and room for the others is just that... a spectrum of emotions. This song goes out to those who may have ever felt just a little bit of place... who just wanted to stand in line with the rest."

While the original wave of shoegazers chose textures and otherworldliness over conventional clarity and 90’s post-rockers opted for progressive and fluid structures rather than traditional form, A Shoreline Dream are the keepers of both of those flames. Delivering a heady cocktail of dream-pop, shoegaze, neo-psychedelia, goth and progressive rock, the new single also brings a gothic undertone set against a pulsing, energetic rhythm and is, on the whole, more in keeping with northern European atmosphere than the warm sidewalks of Denver’s suburbs. A Shoreline Dream is Ryan Policky on vocals, guitar, keys, bass and programming and Erik Jeffries on guitar. Website here, Facebook here.

It's just one day short of a year since we last featured A Shoreline Dream and the new video for the song 'Room For The Others' is very welcome. Musically it's overriding genre is shoegaze, however there are some welcome dream pop influences, that ensure the track has some fine hooks. 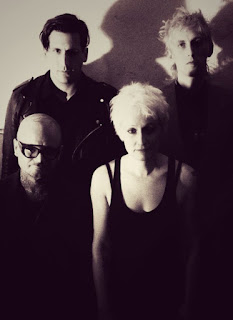 Background - Brooklyn-based Bootblacks have shared the debut single from their forthcoming album. The band's Panther MacDonald explains that the track is about "knowing you have to leave people behind, and how hard that is. And even though letting go is difficult, you can both find the time to remember someone while remembering that it’s not over yet.” 'Fragments' is out 9/14 via Manic Depression Records.

Since the group's founding in 2010, Brooklyn-based Bootblacks have been enthralling audiences with their frenetic live shows from the U.S. to Europe. Their sounds has been described as a balance of contradictions: both pensive and buoyant, referential and modern. Fitting, as the Bootblacks name is derived from novelist William Burroughs' description of the dark underbelly of glitzy New York City.

Vocalist and frontman Panther MacDonald lists an eclectic set of influences: Depeche Mode, New Order, Simple Minds, Echo and the Bunnymen, Joy Division, Early U2, as well as The Beatles and David Bowie for lyrical inspiration.

With the addition of Barrett Hiatt (The Harrow I Automelodi) in early 2017, fans can expect an even more synth heavy, atmospheric and "bigger-sounding" Bootblacks than before, with the followup to Veins set for release in early fall 2017 on Manic Depression Records, followed by a European tour. Website here, Facebook here.

Post punk with energised synths & some fabulous goth like vocals 'Hold & Dissolve' is a stirring and atmospheric song, the eclectic influences cited above are not without merit. 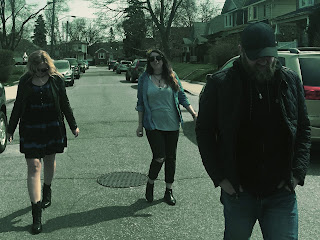 Background - Ottawa-based alt trio The Beautiful Ghosts specialize in dreamy blends of indie rock and ambient synth pop, infused with high-energy electronic components. They don’t really appreciate such labels and prefer to be associated with other artists who defy current standards such as Joy Formidable and Metric, among others.

The trio of Butch Gerald, Catherine Sugrue and Alisha Everett formed in the early 00’s. They all either worked or shopped at a popular record store in their hometown of Ottawa. Butch was actively searching for a female to sing his songs and found that Catherine and Alisha had strikingly similar voices with separate and unique traits. Their original project, Tones For Twilight, experimented with their newfound tonal arrangement but it wasn’t until 2012, when they reformed as Beautiful Ghosts, that they began to officially release material. Their new sound, helmed by producer/songwriter Gerald and featuring the haunting vocal blend of Sugrue and Everett, culminated in their forthcoming self-titled album, out August 25th.

The album is a clear statement from a band whose sharp take on synth rock comes from a genuine love of the original format. Gerald’s infatuation with analog gear dates back a few decades, and goes hand in hand with a deep nostalgia which is rooted in ‘actually’ living through the 80’s. “Seeing kids these days try to connect to the simplicity and innocence of past generations is interesting. They’re trying to explore these retro qualities but still seem to be slaves to new mediums.” Butch asserts, citing The Beautiful Ghosts music as an authentic alternative to the hype. “Songwriters tend to identify with what moves them and for me, it often reaches into a very sacred place”. Facebook here.

'Atomic Disco' mixes swirling synths, rhythmic vibes and fabulous vocals and harmonies, this is a catchy alt pop song that also doubles as a mood lifter. 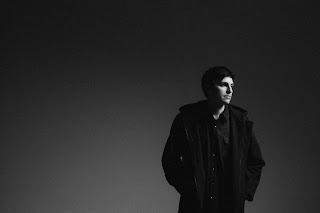 The Pains Of Being Pure at Heart - My Only.

Background - The Pains of Being Pure at Heart have long set the benchmark for big-hearted, idealistic pop songs. With The Echo of Pleasure, The Pains push beyond their many inspirations and embrace their role as indiepop heroes in their own right. Showcasing the deft songwriting of frontman Kip Berman, The Pains’ fourth album is their most confident and accomplished. After three critically-acclaimed records, 2009’s The Pains of Being Pure at Heart, 2011’s Belong and 2014’s Days of Abandon received praise from The New York Times, Pitchfork, The Guardian and Rolling Stone, they have put together a collection of songs that possess a timeless grandeur, deeper and more satisfying than anything the band has done since their iconic debut.

From their earliest days of C86-worship to Alternative Nation-sized anthems to a matured, “Simple and Sure” pop refinement, The Echo of Pleasure is what Berman describes as sounding “heavy and hopeful, like love.” It’s an album that reflects the band’s most joyous moments while maintaining Berman’s candid and critical lyricism, free of the self-abasing insecurity of youth. “The album is loving. The music is heavier, more expansive,” he says. “To me, songs about love shouldn’t be thought of as light. Love is big - sometimes it’s emphatic, overwhelming or simple - other times it’s tense, anxious or just exhausting. But at its best, it makes you want to be something better.”

In their decade long career, Berman has stood at the center of The Pains of Being Pure at Heart, and with a changing lineup, it’s become more apparent. “On [the last album] Days of Abandon, I was on my own. There was no one in the room making decisions with me. It felt strange experiencing that isolation while trying to make sense of it through writing,” Berman admits. “That album was about loss, and I think it conveyed that feeling well –  but I’m glad to move on from that place.” On The Echo of Pleasure, he’s learned to take full agency of something he’s always owned. “With this record, I’ve made peace with the fact I am Pains. It’s always been my band, but I haven’t been super comfortable saying that, partly because I’ve enjoyed working with so many talented friends, and also because the songs I wrote seemed to mean more than anything my actual life could live up to.”

The Echo of Pleasure navigates variability and safety without unraveling. Berman is no stranger to fragility; here, it’s structured with warmth, the kind found after life-altering moments. It’s reflected in the album title, too: “The Echo of Pleasure could be the near-symmetry of love,” he explains. “It’s the reflection back and forth, modulating over time, of two people who are together. It’s not a mirror - but a perpetual answering and asking. When one person is absent, that echo ceases or, as the title track laments, ‘fades into these silent days.’ In that sense, remembering is a kind of echo, each instance slightly less vivid than the one before.”

The first of nine tracks on the new album 'The Echo of Pleasure' is 'My Only'. Vibrant and richly layered indie pop manifests itself throughout this hook filled album, the featured track sets the pace, and it's a fabulous ride from there on in.