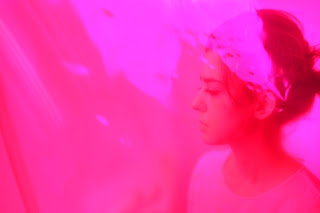 Background - So far, May Roosevelt is best known as a thereminist. She has already performed in cities such as Barcelona, Berlin, London, Istanbul, and she has collaborated with artists ranging from Tijuana groovy band Los Macuanos to Tel Aviv multi-talented artist Kutiman. Despite her collaborations, May has got three releases to her name so far, including 2011's self released Haunted, eight musical compositions included the zeibekiko dance rhythm in "The Unicorn Died", which was composed and presented for the first time in London at the Red Bull Music Academy in February 2010.

May Roosevelt marks her return in 2017 with her new album titled "Junea", just released on October 23th via Inner Ear. It's her first release for the label. Junea is a heroine of the modern digital world, where reality meets fiction through bridges made of electronic sounds and pixels. Musically, it could be said that she is an alter ego of May Roosevelt, adding new qualities to the artist's existing musical identity.

In the world of Junea synthesizers rule, creating a multi-layered sound environment of crystal sounds and rhythmic beats. Ethereal vocals and encrypted lyrics lead to a parallel dreamy, three-dimensional universe that mirrors the artist's exploration into new musical coordinates.

"My intention when composing the music of Junea was to create bright sonic environments and upbeat atmospheres, to shape imaginary spaces of transformation, reinvention and discovery."  May Roosevelt. WEBSITE, FACEBOOK.

From the brand new album 'Junea' we can share 'Air' one of eight songs that make up the collection. If you will excuse the pun, I found the album a genuine breathe of fresh air. The musical production is fabulous, where her dreamy vocals are immersed in layers of synthy sounds. Sometimes the songs are more rhythmic, other times the melody is key to the piece, always present is imaginative & creative music. If you like the featured song, go and dive into the album, it is quite special. 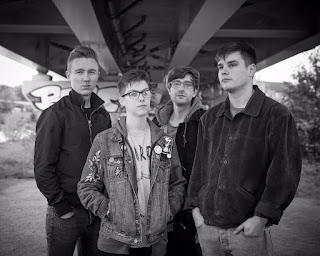 Background - Manchester alternative outfit New Luna have announced the forthcoming release of their latest single Opinionated, further establishing themselves as an act pushing modern dream pop and post-indie in a forward direction.

Drawing early comparisons to the likes of Radiohead, Mogwai and The Twilight Sad, the quartet’s innovative songwriting and expressive live performances have already landed them support slots with acts including Happiness, Sløtface and Trudy and the Romance, as well as appearances at Y Not Festival and The Great Escape.

Discussing their upcoming release, the band stated: “As per with us, Opinionated’s become more extreme and elaborate each time we’ve played it, starting off as a low-key krautrock tune and now being a full on heavy dream pop jam/social mediation. Ultimately with this release, we wanted to make a simple but direct social statement and be as musically free as possible, letting the noise do the rest.” FACEBOOK.

Kicking off with a feisty rhythm that is soon followed by some impassioned vocals 'Opinionated' is soon in full stride. As the full band kick in the songs potency grows even further. More post punk than indie, this is a blast of raw energy and commitment, surely that's enough for one track. 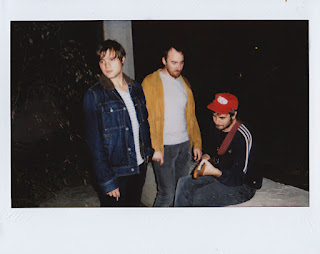 Background - Bee Bee Sea is a three piece band from an industrial town in Northern Italy, with garage-psych songs and a punk attitude. In 2015, they released their self-titled debut album (first pressing is now sold out) via Glory Records, the band’s own label.

In 2016, Bee Bee Sea released a 3 song EP Jacques Dutronc  Glory Records), on digital and cassette. Tracks were soon featured in major commercial campaigns including ads by Fiat, DC Skateboarding, New Balance and DMAX. In April 2017, the band recorded their most recent full-length, Sonic Boomerang, live at Tup Studio in Brescia (IT) with producers Bruno Barcella and Alessio Lonati. The record will be released on Nov. 17, 2017, by Dirty Water Records USA (cassette, digital) and Wild Honey Records (vinyl).

'D.I. Why Why Why' is a no nonsense garage rocker, where the vocals drop some melodic hooks in & the music which begins at fever pitch, refuses to settle down until a catchy guitar break midway through. 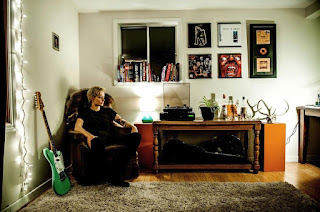 Mo Kenney - On The Roof.

Background - This is the year that Mo Kenney plugs in, quite literally. Known for her smooth vocals and fearless lyrics, the Canadian singer releases the fast-paced On The Roof, due December 8th, & taken from new album The Details.

Mo has released two records with long-time producer and Canadian rock mentor Joel Plaskett since 2012. With her third album, Mo comes fully and completely into her own as an artist; she swaps her trademark acoustic guitar for a Fender Mustang, tracing her own strange, devastating, and ultimately hopeful trip through the trials and tribulations of booze-fuelled breakdowns, clouds of depression, and disintegrating relationships.

"I began writing "On The Roof" during a solo tour in the US. I had a day off in Syracuse, NY, and wrote the chorus for the song that day. When I sit and think of all the negative things in the world it can get me down, because there's a lot of it. I go down that wormhole often, as I'm sure a lot of people do. The song is about being in that mindset and not being able to shake it. " Mo Kenney

On each of The Details' 14 tracks Mo unflinchingly confronts her annihilation and eventual redemption, leaving nothing out. Combining elements of bruising rock ’n’ roll, vivid psychedelia, and haunting, left-of-the-dial pop, Kenney navigates the darkest waters in her life with self deprecation, genuine soul baring, and typical black humour.

Before and during writing the album, Kenney was enroute to rock bottom: depressed with dark blues and drinking like a fish, unable to hold herself or her relationships together, alienating the people she loves, and living hell-bent on oblivion. It’s a journey, thankfully, that finds Kenney sailing to calmer seas, closing gently on the sparse, clear-minded “Feelin’ Good.” But the storms weathered to get there are the kind that leaves scars.

The self-destructive drive of “On The Roof” explodes out of the gate with blistering intensity. “June 3rd” channels the late Elliott Smith with spectral atmospheres as Kenney comes to terms with her alienating behaviour. And the vicious, rollicking “If You’re Not Dead” shows her playing mind games over feral guitar solos and biting hooks. WEBSITE, FACEBOOK.

We featured Mo Kenney back in August and are pleased to be able to feature another track from her new album in the shape of 'On The Roof'. This time we have an energised rocker with some fine hooks, that brighten up the somewhat darker lyrics.