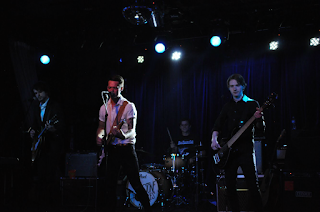 Nocturnal Animals is an American Alternative band from Atlanta, GA. The group consists of Mason Jones, Will Bennett, Derrick Stephen, and Dawson Tucker. Formerly known as "Rude!", Nocturnal Animals revamped themselves and have caught attention with their brand new debut EP of the name "Dark Lit Places".

"This band is very talented and promising. The vocals are charismatic and relateable, reminding me of the Arctic Monkeys with a dash of Billie Joe from Green Day. The production is stellar, as is the songwriting. This really makes alternative rock sound big and relevant again. Just beautiful arrangements and a unique dynamic/mixture of rock styles."

The new EP 'Dark Lit Places' comprises of four tracks which test the spectrum of indie & alt rock. A mixture of feisty rock & roll alongside less intense melodic moments ensures variety is a key ingredient of this fine EP. 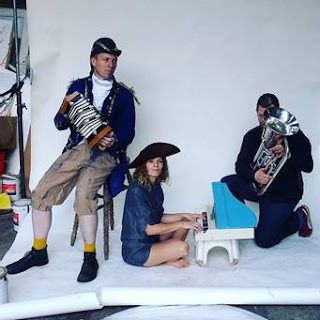 Background - The beautiful new single ‘Wintersun’ by Paul Mosley & the Red Meat Orchestra comes in light of the release of their ghostly new EP ‘Wintertide’ due 1st December. 'Wintertide.'

'Wintersun' -  described by Mosley as 'An exercise in smart-arse time signatures' but in fact a tale of the unkindness of unrequited love. The warm acoustics, layered harmonies and sky scraping saxophone bring to mind West Coast Americana and hazy, dreamy 70's folk pop.

Having received astounding praise from press such as The Quietus, Q Magazine and R2 in the past, Paul Mosely has a reputation for turning heads and this new single is going to be no different. WEBSITE.

'Wintersun' has a timeless folk feel to it. Gently melodic the vocals and harmonies are natural and pleasing. The music gradually develops into a beautiful arrangement, it's a clever tease for the EP.

Background - Songstress Britt Warner and producer Jordan Waré are October's Child. Britt and Jordan are both October babies, though they're opposites—she's a self-proclaimed "death-obsessed" lady, growing up in Los Angeles she used to write songs to help soothe her anxiety about mortality.

On the other hand, Waré thinks of himself as an in the moment type of person, borrowing his musical sensibilities from something a bit more silent: meditation. What an interesting mix, right? Their debut album "As You Go" is coming up, but while we're waiting for this release you can check out their first single, "Orion".

Orion is a haunting yet upbeat track featuring Warner’s angelic range soaring over a seamless blend of orchestral and electronic. The instrumental framework for this leading single was written following Britt’s father’s death, and is wrapped up in the absence she felt during “his” holiday, Thanksgiving.

"The lyrics wrote themselves", says Warner, "I'd fallen for someone who, due to life's circumstances, was unattainable, but there was this undeniable, torturous mutual spark. Orion is that person you click with immediately but are forever after left to wonder what might have been, if only…” FACEBOOK.

Britt Warner's gorgeous vocals are accompanied by a thoughtful and sensitive musical setting on 'Orion' a lush and soothing song. Jordan Waré's attention to detail ensures everything comes together with considerable beauty. 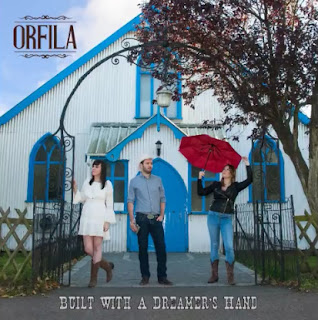 ORFILA - Snow, Rain and A Hurricane.

Background - “Build With A Dreamer’s Hand” is the upcoming EP by sibling country music trio ORFILA to celebrate their five year anniversary. An anniversary that has allowed the trio to nostalgically reminisce about how far they have come together as a band, and grown together in that time.

As they release what is without doubt their strongest material to date, the trio can proudly recall performing alongside a diverse collection of artists including Alvin Stardust, Dodgy, Beverley Craven, 911 and the legendary Albert Hammond.

"The EP is definitely a reflection of where we are as a band at this moment in time. When we recorded our second album we felt that we had found our sound and we wanted to continue down this route for this EP.

We all contributed to the writing process and we had a small band behind us who we had worked with before and who were friends of ours which made it such a fun, laid back experience. The three tracks are three of the strongest tracks we have ever written and we hope people enjoy listening to them as much as we enjoyed making them." WEBSITE.

'Snow, Rain and A Hurricane' is an energised country song, where the vocals and musical arrangement compete for attention and both easily win through, in this upbeat affair.