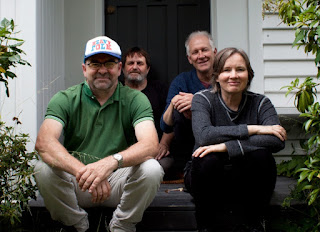 Background - New Zealand indie-pop legends The Bats started the year off by releasing their ninth album, The Deep Set, and now they finish it with a new video.

Directed by Marc Swadel it sees the four-piece performing the track 'Busy' (off The Deep Set) in Christchurch Emigre, James Atkinson's, practice room under the arches of London's Haggerston Station.

Filmed the day before their final show in the Tufnel Dome, the onscreen triptych also features footage from around London during the band's UK/EU summer tour earlier this year.

"Marc Swadel has done an amazing job of editing together band footage with some “busy” film of London's underground and overground using a wide triptych format" - Paul Kean, The Bats. BANDCAMP, WEBSITE.

It was back in February of this year that we first featured The Bats. The band end 2017 with a new video for 'Busy', another refined song from the album 'The Deep Set' where indie pop and rock are presented with class. 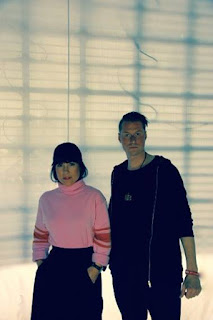 Background - The new single has just been released on Music For Dreams. Awake in the night, the Danish duo AyOwA go searching their sub conscious to the haunting lyrics of Danish writer Mette Moestrup.  “Insomnia” is the first single from their forthcoming EP “Farvel”, to be released in May 2018 on Copenhagen label Music For Dreams. Based on their trademark electronic approach, but this time with many acoustic elements, the duo goes exploring new sides of their nordic, dark and moving electronic songs.

Sung in Danish, but with a certain universal and dreaming approach,  AyOwA combines noise pop with electronica and melodies with improvisation, in an evocative and playful mix.

AyOwA has had a busy year, playing big festivals like Spot and Roskilde.The duo has been featured on BBC 1, Radio X and Apple Music Beats 1, as well as P3 and P6 in Denmark. They were also chosen as one of five bands of significance in 2017 by nordic blog and showcase JA JA JA.  AyOwA has been featured on Wonderland Magazine, Line of Best Fit, The Clash, Noisey, Vice, The Independent (UK) and Huffington Post (US), and marks the very rare occasion of a band singing in Danish, featured outside the country. FACEBOOK.

Our fourth feature for AyOwA this time with 'Insomnia' a gorgeous song sung in the duo's native language. Whatever might be lost in translation, the atmosphere, passion and beautiful music makes up for. In fact for non Danish speakers it adds another layer of fascination. 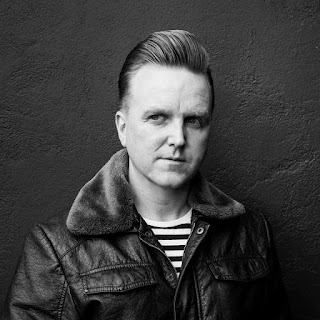 Skelhorn - A Wondrous Place Of Our Own.

Background - Skelhorn debut single is 'A Wondrous Place of Our Own'. The song boasts meaningful lyrics, masterful musicianship and polished production techniques to create a record with a unique atmosphere.

Skelhorn makes music to reflect old and new, fusing his acoustic roots with electronica and wonderfully authentic vocals. Tarantino meets Morricone, with a dusting of Twin Peaks and a shot of Rock’n’Roll Quickly garnering support from key radio tastemakers through his strong catchy hooks and meaningful lyrics, the singer songwriter from Liverpool is generating a real buzz across his home city and beyond.

Skelhorn began his musical career at the age of fourteen, performing in clubs and pubs across the North West of England. He was quickly noticed by Radio Merseyside and Radio City and could regularly be heard and seen on live broadcasts and roadshows. Through this early radio support he was able to meet and perform with legendary songwriter Bill Dees (Pretty Woman) and Sonny Curtis (The Crickets).

Skelhorn has recorded, performed and toured with three bands prior to launching his solo career, gaining an enviable reputation and invaluable experience to stand him in good stead for the next chapter. FACEBOOK.

As debut singles go 'A Wondrous Place Of Our Own' has confidence and character to say the very least. Melodic and with lush layers of melodic music the vocals are definitely what give the song that special dimension.