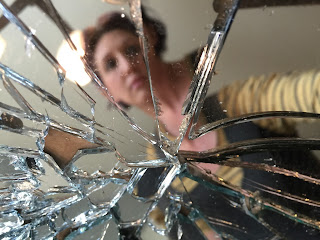 Her experimental approach should appeal to fans of innovators like Kate Bush and Imogen Heap. Sarah writes and records out of her home studio.

Sarah combines classical-sounding piano with ambient washes, vocoded synths, electronic elements, and layered vocals, and she is not afraid to experiment with vintage instruments as well as new technology to create her sound.

"For "Penguin Party," I chose to stick to the keyboards and loopers to focus on creative a more energetic album that people would want to move to. It also gave me a chance to experiment with some new ideas, such as using vocoder to make a drum track drive a bassline, looping live, and extravagant piano ornaments." WEBSITE, FACEBOOK.

I have only heard a couple of tracks from the forthcoming album including the featured song 'Astound Me'. I have to say, I am more than just a little keen on hearing the rest. Sarah's vocals bear some resemblance to one of the above mentioned artists, particularly in her phrasing and delivery. That said this one song is a delicious mixture of musical ideas that are carefully crafted together with plenty of individual uniqueness. 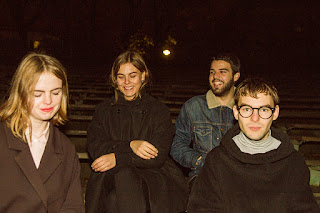 Four Waters’ — the band’s debut EP is a hugely striking and diverse 4-track release, one that’s set to propel the band to even greater heights. "Four Waters is about not being enough” the band explain. "The frustration of not being able to do more, or doing something you thought would be the right thing but turned out not to be. Questioning your purpose and meaning and trying to be secure with who you are. It’s about helping each other out when one of you can’t manage and about finding your own ways of dealing with things. Following your intuition and doing what you feel is the right thing to do."

When we think of the songs on the EP we imagine ourselves standing by a dark lake somewhere deep in a forest in Sweden. We see the four songs as different types of water. Still, stormy, deep and obscure. Four different songs with the same wavy sound and feeling. It’s all about water and feeling blue.”

Prior to forming via Twitter, all 4 members of Steve Buscemi’s Dream Eyes had been operating in different small Stockholm bands. It was in the summer of 2015 that Tilde Hansen (bass, vocals) tweeted out a request for fellow musicians to start a new band. A couple of months later, Steve Buscemi’s Dreamy Eyes were formed. FACEBOOK.

We featured the track 'Swim Deep' earlier this month and now we get to share the full EP 'Four Waters'. This is an impressive collection of indie/dream pop, with the band delving into differing directions and styles. One consistent aspect is the melodic hooks, they are everywhere! 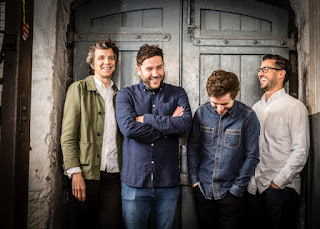 Background - Aberdeen’s The Little Kicks return with their immensely uplifting new single, Bang The Drum Slowly, out 1st December 2017 via Loosen Up Records.

Bang The Drum Slowly is a mightily infectious slice of off-kilter indie pop. It races through with scuzzy hooks, glitchy beats and sweeping harmonies, resulting in a delightfully quirky sound akin to the likes of Hot Hot Heat or OK Go. It's the fourth single to be taken from their latest album, Shake Off Your Troubles. Describing the album, lead singer Steven Milne explains “the themes of the record would be a feeling of happiness, gratitude and to be thankful with what you have and not take things for granted. Furthermore, not to let others get you down or let anyone put you in your place.”

Since forming five years ago, The Little Kicks have received critical acclaim from the likes of NME, Q, Clash and The Skinny to name but a few. They have also received support from BBC 6 Music, BBC Radio 1, Radio Scotland and XFM as well as Shake Off Your Troubles being nominated for the Scottish Album of the Year Award. Now, having shared stages with acclaimed bands such as The Maccabees, Maximo Park and White Lies, The Little Kicks hope to continue charming listeners further with the unique, vibrant sounds of Bang The Drum Slowly. WEBSITE, FACEBOOK.

You can catch The Little Kicks live at the following dates:

'Bang The Drum Slowly' is an infectious indie pop/rock song that is both vibrant and extremely catchy. Upbeat in nature the bands delivery is high quality and confident, whilst they write and perform material this good, that is hardly surprising. 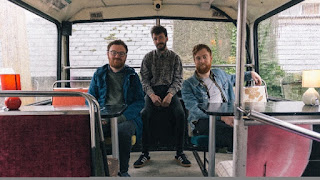 Half Forward Line - For Centuries.

Background - Half Forward Line debut first single "Hey, Can I Try on Your Glasses" from their debut album The Back of Mass.

Half Forward Line is the new band from Brian Kelly (So Cow), Niall Murphy (Oh Boland) and drummer/recordist Ciaran o Maoláin. The trio have crafted a short sharp dose of power pop, recorded over two days in the lounge of a derelict rural Irish pub. "The Back Of Mass" takes in tales of wedded bliss, social anxiety and the perils of letting someone try on your glasses. Infused with the pioneering jangling spirit of the Flying Nun roster, along with garage rock sonics and Kelly's inimitable brand of buzzsaw pop and slice-of-life lyrics, Half Forward Line have delivered a half-hour album hallmarked by hook-laden songs.

The back of mass is the rear of the church, near the doors, home of the last people to come in and the first people to leave. There's the whispered running commentary on the ceremony. There is the shifting of weight from foot to foot, counting down the minutes. People who would probably rather not be there, but would rather the insurance when their final day comes.

Half Forward Line will be releasing their album on cassette on Rusted Rail of Galway, with the CD version on Jigsaw Records of Seattle. FACEBOOK.

'For Centuries' cuts to the chase in an energised musical manner, with the vocals adding some melody above a feisty guitar driven musical soundtrack. Power pop with a pleasing and healthy element of natural rock & roll.