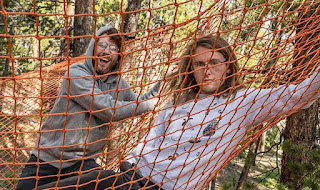 Kudzu - No Backbone / Some Cops.

Background - Missouri-based post-punk synth wave duo Kudzu have announced their forthcoming album 'Defeated', slated for release in early 2018 via Push & Pull Records. This album is a reaction to mounting disappointments and frustrations with increasingly frustrating and disappointing realities.

On this 9-track long-play, Kudzu delivers a cheerfully caustic synth pop assault with psychedelic underpinnings, like paint fumes you'd happily dance to. The offerings range from post-punk (Defeated) to synth pop (One Purpose, No Backbone) and tracks with a darker more industrial sense (Balking The Grave). If that's not enough to intrigue you, the vocal delivery oscillating between John Lydon of Sex Pistols and PiL fame and the cold sinister lyricism of Al Jourgensen's Ministry in the band's earliest phase.

Based in Springfield, Kudzu is Seth Goodwin (vocals, synth, and drum programming) and Mark Gillenwaters (vocals and guitar). Influenced by bands such as Tears For Fears, The Cure, Spectrum, Guided by Voices, Sympathy Nervous, and This Heat, they've managed to concoct a sound original from any of them.

"A lot of these songs come from a place of disenchantment with punk and "diy" scenes i've dedicated too much time to and the resulting dissociation as i've continued to have involvement in those scenes," says Seth Goodwin. "A documentation of a transitional period that im sure a lot of people feel as they start to feel parts of them age out from this type of lifestyle but dont know how to do anything else."

'Defeated' was recorded by Adam Schoeller and Jonathan James at No Coast Recording, and mixed by the latter, with Shay Rainey creating the cover artwork. FACEBOOK, BANDCAMP.

'No Backbone' and 'Some Cops' are two of the nine tracks that make up the forthcoming 'Defeated' album. This is an impressive collection of mostly high octane post punk material, with plenty of synth lead music. Echoes of John Lydon ride alongside the pairs own modern and creative musical developments, resulting in an addictive album that begs to be heard performed live. 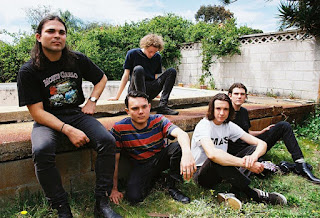 Almond Soy - Happy Ever After.

Background - One of the surest signs it's summer in Perth is the wave of brilliant new music that emanates from the city every year. A perfect case in point is Social Misfit, the debut EP from indie five-piece Almond Soy. Opening with the band's energetic single Happy Ever After, the EP is a triumph of mature songwriting and the boundlessness of youth.

Undulating through varying moods and tempos, Social Misfit shows off the multi-dimensional talent of the band. I Could Be The One is more beat-driven and swaying; awash in an ocean of synth and reverb... leading perfectly into the bouncy third track Whiskyand its dance floor rhythms and duelling guitars. The EP closes with the tranquil I Always Wanted The Moon, creating a beautiful ambience with its layers of nonchalant vocals, orbited by spacious guitar riffs and subtle horns.

Taking these beautifully written songs and giving them the sonic grandeur they deserve, The Money War's Dylan Olivierre has excelled in his duties as producer. While there is no definitive 'Perth sound' to speak of, Social Misfit has certainly encapsulated the mood of the city. Laid-back yet adventurous, Social Misfit balances warmth with a cool breeze; allowing each song to radiate without being overbearing. Each song is bursting with unique character, yet they flow together as one coherent work of art.

Starting out as a bedroom project, Almond Soy have developed at an unbelievable pace. Formed at the end of 2016 and lead by brothers Brandon and James Stockbridge, the band has evolved into a sophisticated ensemble, exemplified by Social Misfit. Driving each note is an emotional energy that shows the band's natural chemistry. Now ready to kick things into the next gear, Almond Soy will be heading out on their first Australia-wide tour in January 2018, following up a run of sold-out headline shows in their home city. FACEBOOK.

Upbeat and fast paced music is accompanied by more measured vocals on 'Happy Ever After' a refreshing indie song that is both energised and catchy. 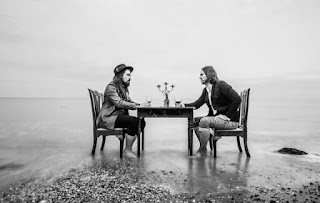 Background -  Percival Elliott are an indie-folk rock duo from the south coast of England. Formed by the belief that true friends can create something meaningful, Olly Hite and Samuel Carter-Brazier united to grace audiences with their poignant lyricism and neo-nostalgic melodies and have since been captivating listeners at sold-out shows across the UK.
Titled in memory of Hite’s great grandfather, Percival Elliott, born in 1883 was an inventor who created one of the first ice-cream emporiums in Brighton. After discovering a dusty box of trinkets in the back of Hite’s family attic, the untouched time capsule unveiled Percival Elliott’s mysterious inventions, engraved ice-cream paraphernalia, haunted photographs and time honoured war medals. The revelation of these long-forgotten hidden treasures became embedded within the duo’s imagination and musical creativity and thus Percival Elliott was reborn.
“Forever” is the first single to be released off the duo’s upcoming album Save Your Soul. Inspired by the likes of Jeff Buckley, The Beatles and Father John Misty, “Forever” is a gracefully heartfelt and atmospheric song about eternal love. Hite reveals, “Forever is about a chance meeting with someone. Sparks and butterflies, even if it’s just for a second, that feeling can last forever”. The use of yearning lyricism seamlessly blended together with Hite’s celestial vocals and Carter-Brazier’s soothing guitar, “Forever” succeeds in crafting a song of compelling honesty and authenticity.
The duo are known for their signature style of hard hitting piano melodies, rhythmic guitars and retro vocal harmonies, all underpinned by a string quartet. “Forever” illustrates the band’s desire to create music that makes the hairs on your neck stand up, “We want to make the listener feel alive” Hite expresses.
Percival Elliott's successes to date include a national tour with numerous UK charting artists, as well as collaborating with the likes of Fatboy Slim. Percival Elliott are now ready for the next chapter of their musical endeavour with the highly anticipated release of Save Your Soul due early 2018.  WEBSITE, FACEBOOK.

Indie folk may have become something of a crowded place, however songs such as 'Forever' suggest there is plenty of mileage and opportunities for creative people to continue to build upon. This is a melodic and superbly arranged song, the vocals are smooth and pleasing, the music builds instrumentally and adds even more to this engaging piece.