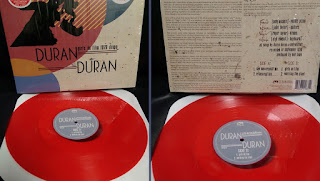 Background - Cleopatra Records has released Duran Duran 'Girls on Film 1979 Demo' EP featuring Andy Wickett on vocals. These are rare debut recordings, which include the original version of the smash hit 'Girls on Film' and 'See Me Repeat Me', which would later be transformed into 'Rio', as well as other songs that the group shopped around to various labels before eventually signing with EMI. Recorded in 1979, these historic previously-unreleased demo recordings by ‘80s new wave icons Duran Duran feature the group’s early frontman Andy Wickett (a.k.a. Fane), alongside Nick Rhodes, John Taylor and Roger Taylor. They were recorded at Bob Lamb's studio (home of the band UB40) in Moseley, Birmingham.

Originally formed in Birmingham by Nick Rhodes, John Taylor and Stephen 'Tin Tin' Duffy in 1978 as an art school band, Duffy left Duran Duran in early 1979. After TV Eye vocalist Andy Wickett left that band, Stephen Duffy took his place. Soon afterwards, Andy was enlisted by Nick Rhodes and John Taylor to front Duran Duran. According to Andy Taylor's autobiography, Andy Wickett had a major part in the writing of 'Girls on Film' during his tenure with the band. Wicket explains that, unlike the sexy imagery depicted in the video for this song, the lyrics were actually inspired by the lives of the stars of old black and white movies.

"It is important for people to understand the true origins of the song 'Girls on Film' and to hear the edgy sound that Duran Duran had in the beginning," says Andy Wickett. "This song was inspired by the dark side of the glitz and glamour, where these perfect idols suffered tragedy and addiction. The film 'Sunset Boulevard' was also a big influence with its tale of a fading movie star."

Andy Taylor confirms that Wickett co-wrote an early version of the song that eventually came to be known as 'Rio'. Indeed, 'See Me Repeat Me' was taken from 'Stevie's Radio Station', a song written by TV Eye when Wickett was their vocalist. A favourite of Nick and John, it was incorporated into Duran Duran live sets during Wickett's tenure. Duran Duran eventually released 'Girls on Film' in July 1981 and it became a Top 10 breakthrough in the UK Singles Chart, peaking at Number 5 that month. The song 'Rio' was released worldwide in October 1982 and became a Top 10 hit in the UK Singles Chart, peaking at #9 in December 1982.

Since these early days in his career, Andy Wickett has come to be known as one of the finest performers and songwriters in the Midlands, having gone on to also front The Xpertz and World Service. Apart from playing arenas and venues around the world, Andy has also produced videos for and co-written albums with world renowned artists such as Nusrat Ali Fateh Khan, Malkit Singh, Stereo Nation, Taz and DCS. Over the years, he's supported The Clash, U2, Culture Club, Burning Spear, Orange Juice, in addition to opening on UK tours with Duran Duran and Gregory Isaacs.

Andy Wickett & World Service have also just released a full-length album 'Creatures of Love' digitally via Cleopatra Records, which will be officially released on CD on March 9, 2017 on that same label. The 'Girls on Film 1979 Demo' EP is available digitally and on CD, as well as on stunning red and clear colored vinyl. Duran Duran WEBSITE, Andy Wickett WEBSITE.

Well Beehive Candy cut their teeth sharing rarities similar to this, albeit unreleased and unofficial versions. The background above is longer than we usually publish, I just felt the full story is worth repeating without any editing. Anyhow the demo version of 'Girls On Film' along with the other material including the intriguing 'See Me Repeat Me' later morphing into 'Rio' makes for a fascinating listen and raises a few what if questions along the way. For Duran Duran fans this is most likely a collectors item in the making, and for Andy Wickett it's some well deserved publicity for his 'Creatures Of Love' album. 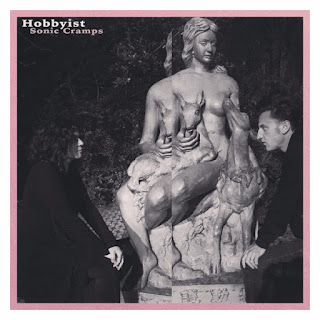 Hobbyist - Teeth Of The Shark.

Background - Hobbyist is Holly Prindle, who sings, and Marc Mozga, who plays guitar, drum machines, drone machines, bass and melodica. The band was formed in 2013 in Chicago, Illinois. The release of their self-titled debut album came that same year, along with the EP Hobbyist in Dub, featuring reggae bass master Dennis Bovell.

After playing numerous rock shows in their hometown of Chicago, Holly went to live and sing in Goleniow, Poland with the experimental theatre group Teatr Brama, who specialize in community art and ancient pagan folk singing. Concurrently, Marc embedded himself for three years with a suburban Chicago family to film them raise their autistic son. The result was Getting To First Grade, an observational documentary produced, shot and edited by Marc, which was completed in 2015.

The duo went on a short tour of the Northwest USA and Vancouver in late 2015. On a rainy night in Vancouver Marc proposed marriage to Holly and she accepted. The trip also led to a fruitful live to tape recording of the song “2244” at Dub Narcotic Studio in Olympia, Washington by Pual Krogh. In 2016 the song was released as a lathe cut 7” picture disc with all proceeds benefiting the Chicago Metropolitan Battered Women’s Network. Early that same year Holly and Marc were wed in the lookout tower of a bridge house along the Chicago River.

In the month of January 2017 Hobbyist took up residence in Barcelona, Spain to work on material for a new album. The gothic Catalonian city in the off season proved a surreal vantage point for Hobbyist to take in news from back home: A germaphobe ex- reality TV star was now president! These experiences inform their new album Sonic Cramps recorded at Pallet Sound, Chicago and due eleased last Friday. WEBSITE, BANDCAMP.

'Teeth Of The Shark' opens with a funky bass line that is joined by some fabulous and emotional vocals. Gradually the layers of sound develop, however there is a minimalist feel across the song, that said, by the end of the song those teeth have sunk right in. 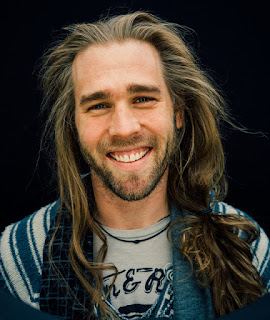 “I wanted to explore more powerful rhythms than you get with the usual acoustic singer-songwriter thing,” Tennis explains. “My band can play a lot of incredible grooves, so I know I can throw anything at them and they’ll turn it into genius stuff that makes people move. I’m flat-out amazed at what they did on the new EP.”

Over the years, Tennis has been compared to artists such as Paul Simon, Ben Harper and Bill Withers. The songs on Two Days on the Fence range from soul-enriching ballads to exuberant, body-moving groovers, and they see the inveterately creative singer-songwriter spreading the waters of his influences (“a lot of folk, soul and Afro-Caribbean sounds”) while micro-targeting his lyrics to soothe today’s information-overloaded society.

“I wrote these songs with the intention of giving people hope and positivity in their lives,” Tennis says. “In general, we’re inundated with negativity – from the news to Facebook, it’s so easy to get bogged down. I’m not one to write protest songs, but in a way I did that by writing songs to make people feel good. There’s a lot of power in that message, the audacity it takes to feel joyful in tough times.” WEBSITE, FACEBOOK.

'Two Days on the Fence' is a collection of five tracks that are rich with musical quality and Ryan Tennis's engaging and vibrant vocals. Funky and soulful tunes rub shoulders with more gentle acoustic moments, the musical arrangements are superb and the diversity of ideas remarkable.