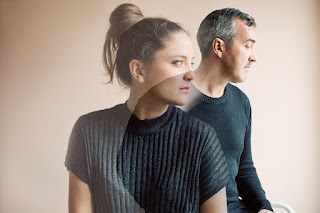 Background - Indie-pop duo Tiny Fighter are releasing their debut single New Century. Meeting in Stockholm in 2017, this Australian/Swedish pair have quickly built a strong live reputation for mixing catchy indie-pop with darker themes and arrangements, led by the enigmatic Therese Karlsson. New Century was recorded in Los Angeles and Stockholm with Daniel Rejmer (Ben Frost, Foals, Girls Names) and extends on the more melodic moments from their previous work with bands such as Fire to the Stars and Mid-State Orange.

After relocating to Stockholm from Melbourne in 2016, Therese and Tim came together via some rather fortunate semi-random sampling (i.e. internet band forum) and quickly realised that where Tim was good at starting songs, Therese excelled at finishing them. Their single New Century describes the tension many experience between unfulfilled desire and resigning to one’s fate with a drive to take control of one’s destiny and make a difference. The title, New Century is meant to suggest reinvention, a personal reinvention – which whilst desirable is not always an easy or straightforward thing to do.

Accompanying the single is award winning directors Kyle V James & Mallori Taylor’s incredible video, short entirely on a 360-degree camera. The video extends on the lyrical theme of reinvention, using the 360-degree camera to distort or reimagine a range of natural and urban landscapes into dream-like exaggerations of their original selves: oceans turn to globes, whole forests morph into a single dandelion as a metaphor for the internal personal changes the song’s main protagonist so desires, but can’t quite seem to obtain. By pairing the music with such wild distortions of the everyday objects and landscapes the viewer is encouraged to look at their own everyday life in a different light and from a different angle – the truth may be right there in front of you, you just need to be more flexible with your interpretation.

Tiny Fighter will be performing a run of European dates (Sweden, Denmark, Germany, Netherlands) in support of the single, with a more extensive tour including Australian dates later in the year. FACEBOOK.

Indie pop with some intense and soulful vocals, 'New Century' also carries a musical arrangement that adds some melodic layers, along with a fabulously chunky beat, be warned, this is very catchy. 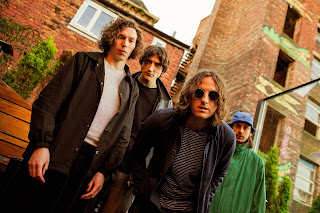 Background - Manchester fourpiece Dantevilles have announced the release of their new single Blackjack released through Heist or Hit last Friday.

Dantevilles are a new breed of Manchester band singing songs for a New North. Their inspired yet modern take on alternative pop is fresh, polished and completely addictive. Full of soul, punchy guitars and completely unique duel vocals, Dantevilles know how to create a melody. A group of tight-knit friends with infectious personalities, they’re a gang you want to be part of.

Produced by Joe Cross (Hurts, Courteeners), Blackjack opens with energetic guitars and charismatic duel vocals that combine for a fast-paced and upbeat chorus. Written with lust in mind, it’s a song for the young generation about trying to live your dream and living in the moment. The band say;

Vibrant and urgent Dantevilles are one polished band whose music is tight and dynamic. The song 'Blackjack' is taken even further with vocals that are a perfect match for high octane music of this calibre. 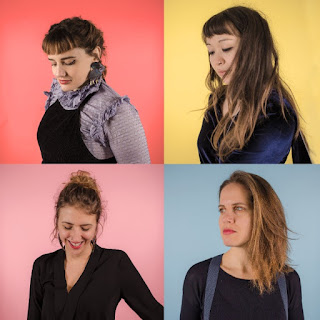 ‘Fable Electric' is an album that brims with exploratory wonder and bridges the gaps between spectral pop, dreamy grunge and ambient folk, whilst lyrically exploring ancient tales of mythology and the underworld. Since forming in 2014, the band - made up of Cara Sebastian (Lead Vocals & Guitar), Ruby Jack (Lead Vocals & Guitar), Beth Dariti (Bass) and Kaja Magsam (Drums) - have been running their own show in their own way, touring across Europe and the UK and quickly building a cult following in both Berlin and London, whilst racking up support from tastemakers at BBC 6 Music and across the blogosphere.

After wowing crowds at Secret Garden Party, Shambala and more this summer, the band swim deeper into their own concepts to present their debut album, which was recorded at Grand Chapel Studios with esteemed producer Rob Ellis (Anna Calvi, PJ Harvey, Cold Specks).

Both wild and elegant, the record is framed by intuitive beats, bass hypnosis that playfully counters melody, and a deep love of contrast. The two vocalists braid together over hooky guitar lines in a complex plait of old and new, understated and operatic, light and dark. The songs of Marine crystallised from mythology and fables, mingling with personal words and emotions to form tales of the ordinary and extraordinary. Their songs reference the underworld, seal demons, mighty Kraken, werewolves, witches and Gods, and even question the very nature of storytelling itself. FACEBOOK.

Second time around on Beehive Candy for Marine and their new single 'Sirens'. The lush and intricate musical arrangement is gorgeous in it's own right, the vocals are outstanding taking the song to an even higher level. Marine have something special going on here, the album can't arrive soon enough! 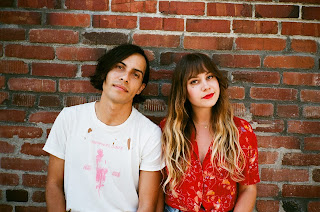 Pageants - Musings Of The Tide.

Background - Pageants new music video for their second single "Musings of the Tide" has just been released. Since releasing their first single "Cacti For Clothes", the band have received an overwhelming amount of support from Spotify being added to some of their largest Playlists including "Ultimate Indie", "New Indie" and "Undercurrents" - that track is now averaging over 12k streams per day - over 500k as of today.

Pageants were formed by Rebecca Coleman in the aftermath of leaving Avi Buffalo (Sub Pop) in 2010, a band in which she was a founding member at the age of sixteen. Frustrated with clashing personalities and differences in musical sensibility, she, along with two other Avi Buffalo defectors, set out to revive the simplicity and spirit of earlier days. Diaristic yet dreamy and abstract in nature, her songs merge pop levity with melancholic lyrical undercurrents.

Collaborating with boyfriend Devin O’Brien to flush out demos, their debut LP, ‘Forever’ was close to completion in 2015. When label interest around the album hit a wall, the band decided to hold off on finishing the record while pursuing other opportunities. Coleman continued to write, O’Brien focused on engineering and producing, while also being picked up by Cherry Glazerr (Secretly Canadian) to tour as their bassist and drummer Dylan Wood went on to play with Best Coast (Harvest). Inspired by fresh material and perspectives, Pageants decided to finish ‘Forever’ earlier this year and will be releasing their debut album on February 26 via Eye Dull Records. FACEBOOK.

Our third feature for Pageants, this time with the new music video for 'Musings Of The Tide'. This is also the third song we have featured from next months album release, where there are an additional seven fine tracks to discover. Dreamy and melodic Pageants are consistently delivering music that is just easy to love.