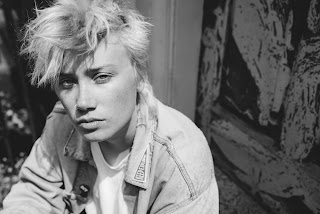 Background - Guildford-based Annabel Allum launches into 2018 with new single Beat the Birds. By turns invigoratingly caustic and charmingly lackadaisical, Annabel’s first release since the acclaimed All That For What EP came out last year is further evidence of her ability to marry folk-style storytelling with snarling fuzzy indie.

Annabel has performed a number of prestigious slots in the past few months, culminating is supporting the iconic Beth Ditto across her UK/EU tour at the back end of last year, as well as sharing the stage with Nadine Shah, Blaenavon and more. Sets at The Great Escape, Live at Leeds and SXSW last year brought her to wider international attention, and this spring she will be once again taking in the bright lights of Austin for SXSW 2018.

Alongside the striking sonic aesthetic of her music, her original look and self-styling has led to endorsements from Bastian Classics, Cheap Monday and various other indie clothing brands. Liam Corneloues on bass and Emma Hiley on drums complete Annabel’s trusty band, prepped to deliver fiery sets across the UK and Germany in early February, climaxing with her biggest headline show to date at London’s Camden Assembly on Feb 6th. WEBSITE, FACEBOOK.

Loose and swaggering 'Beat the Birds' is a sumptuous rocker. The music is thumping and energised whilst Annabel Allum's vocals are determined with some real rock vibes and enough melody to throw hook after hook at the listener. 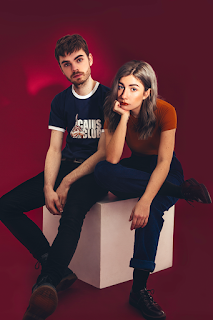 Background - Austrian duo Leyya have arrived with their euphoric and eclectic sophomore LP, "Sauna." Leyya are looking forward to their performances at a string of European festivals in early 2018, before they head to SXSW Festival​, taking their idiosyncratic sound to the USA. ​Their debut album Spanish Disco was an instant success, with hit single ‘Superego,’ ​racking up over 3 million plays ​on Spotify putting the pair on the map, and inciting a whirlwind of huge festival performances and radio play, as well as television and film appearances.

Their performance at Iceland Airwaves was called one of the “most exciting​” on display by C of S, ​while their show at Eurosonic Nooderslag ​was branded “The best concert of this year’s Eurosonic Festival" ​by Musikexpress, and have graced the stages of a host of festivals: New York’s Indie Week, The Great Escape (Brighton, UK), Liverpool Sound City ​(Liverpool, UK), Tallinn Music Week (Tallinn, EE), PrimaveraSound ​(Barcelona, SP) and Electronic Beats at Reeperbahn Festival (Hamburg, DE) - before finally headlining Popfest (Vienna, AT) back home, where they played to a crowd of 20,000 in front of the famous Karlskirche​ in Vienna’s beautiful City Centre. After building a strong & passionate live following, Leyya won Austria's most prestigious prize - the Amadeus Music Award - for Best New Artist.

In true Leyya ​fashion, the track ‘Heat’ mesmerizes with wonderfully layered and intricately constructed electronic sounds, tastefully crafted into an experimental pop song. The track is a collection of the subtle contrasts that make Leyya such a fascinating act, complete with Sophie’s trademark breathy vocals sitting against an intricately designed soundscape. Forgive Leyya for their refusal to fall neatly into a single comfortable musical pigeonhole, and ‘Heat’ soon becomes a magnetizing musical journey. WEBSITE, FACEBOOK.

I was struggling to pick one song to feature, finally settled on 'Drumsolo' then re-read the promo and realised I can share the full album. 'Sauna' is one of those albums that needs to be heard in full, the Austrian duo, craft each track in such an individual manner (which is why I struggled to pick just one song). The music might be described as Electro alt pop but then again they are more than that & extremely engaging. 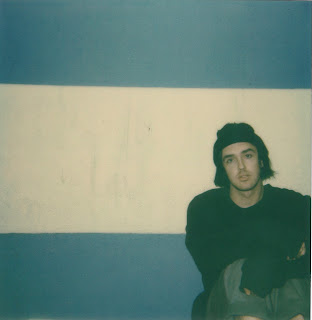 Background - Launder is the pseudonym of LA dream pop/shoegaze solo artist, John Cudlip, and today, January 26th, 2018, he released his single, Fade, giving a first taste of what to expect from his upcoming self-released debut EP, Pink Cloud. After John was introduced to Jackson Phillips (Day Wave) last year, the two began recording music out of Phillips' home studio in Echo Park for what would eventually become Launder's EP, Pink Cloud. It wasn't long before John enlisted the help of Soko and Zachary Cole Smith (DIIV), who both put their own personal touch on various parts of his EP.

"Fade" is the lead single from Launder's Pink Cloud and features the collaborative efforts of all three musicians with Zachary Cole Smith on guitar, vocals from Soko, and Jackson Phillips on synth. An unlikely group of musicians, sure, but each lent a hand to the completion of the EP in different ways. If you're trying to make sense of it, you could say DIIV, Soko, and Day Wave all walk into a bar and meet this guy John who happens to play guitar and before the night's over they agree to help him put together an EP.

That story's actually not too far from the truth. In fact, it kind of is the truth, minus a few details. They weren't at a bar and it wasn't some empty drunk promise to record some music together because here we are feeding you the first single. Pink Cloud was produced by Jackson Phillips and will be available across digital platforms in March 2018. FACEBOOK.

The arrangement on 'Fade' is notable. The band add layers musically, with some unexpected twists before reverting to the original flow & off we go again, leaving the vocals to anchor the song, which they do, and very well. 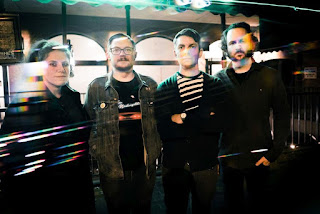 Background - The haunting, bittersweet melodies of LA-based shoegaze outfit Modern Time Machines have been described as a “noisy, romantic hurricane for those who like their rock with intricate layers” (Buzz Bands LA). Boy/girl vocal harmonies feature heavily in the band’s feedback-laced love songs, which have drawn comparisons to acts like M83, Medicine and Sonic Youth. The band have just shared the music video for "High Noon," which is loaded with over a dozen Paul Thomas Anderson-related easter eggs.

Following the local momentum of their earliest shows, the band’s first single “Dweeb” began receiving strong radio support from LA’s KROQ 106.7FM. Continually refining their sound with “nuanced playing and killer hooks” (Los Angeles Times), the band was invited to perform live nationally in 2012 on Adult Swim’s cult TV hit The Eric Andre Show, and their music will be featured in the upcoming film So Help You God by noted filmmaker Ashley York (Netflix’s TIG).

Shoegaze from the opening moments 'High Noon' is light enough to allow the vocals and melody to come through with clarity, without compromising the energy and edge this genre is associated with, the refrains and catchy, the production gives it that special something.