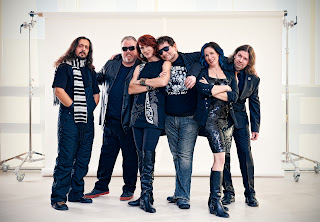 Tom plays bass and sings. His curious nature comes from growing up as a “ginger” in London, and Galway, Ireland. Mary plays cello, sings, writes lyrics and dreams of glamor. Self-taught guitarist Mike Conley grew up with Rush, the Scorpions, Ozzy and Van Halen. Then he discovered Swedish virtuoso Yngwie Malmsteen and neoclassical metal. He’s been experimenting ever since.

'Fat Cats' opens with some chunky riffs and when the vocals kick in, a bluesy alt rock feel quickly emerges. It doesn't stop there as the bands creative music takes us even further, curious indeed! 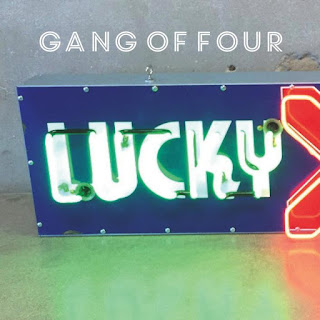 Background - New single 'Lucky' is the first to emerge from forthcoming EP 'Complicit' (due out April 13). It's the first new music from Gang of Four since 2015’s acclaimed 'What Happens Next' album. In the interim the band have been championed by artists as diverse as Frank Ocean (who sampled them on 'Blonde'), James Murphy, Pharrell (who cites GoF as a prime influence on the new N.E.R.D. album), and St Vincent (rating Andy Gill as one of her favourite guitarists.

Guitarist & founding member Andy Gill wrote 'Lucky' with frontman John 'Gaoler' Sterry, with production by Ben Hillier (Blur, Depeche Mode). Speaking about the track, Gill says; "I’d been watching a serious debate on one of those financial news channels - six white men in suits arguing about the stock markets - and it set me thinking about how limited luck can be. A lot of trading is anyway now done by algorithms to try to eliminate the element of chance, but luck isn’t capable of fundamentally changing the system. Even if you believe market crashes are the result of bad luck rather than layer upon layer of human and machine error, the system shudders, restarts and goes on as before.”

Gang of Four came into being in 1977 and its first phase, incorporating several changes of lineup, lasted until 1984. Their debut album Entertainment! – voted in Pitchfork’s top ten albums of the 70s & a ‘Record That Changed The World’ by MOJO, equally beloved by the likes of R.E.M., Red Hot Chili Peppers, Nirvana & Rage Against The Machine - felt like a blast of ice-cold water, both in form and content. Gill and King made two more albums in the 90s and another in 2011, Content. When King left the project, a reinvigorated Gill seized the opportunity to reimagine Gang of Four from the ground up. As guitarist, composer, producer and lyric writer, he was and remains the band’s driving force. WEBSITE, FACEBOOK.

The one and only Gang Of Four are back with 'Lucky' a vibrant, energised rocker that is as fresh as anything the band have previously produced. Clearly there is plenty of creativity and ideas around, as the band enter their fifth decade of musical exploration. 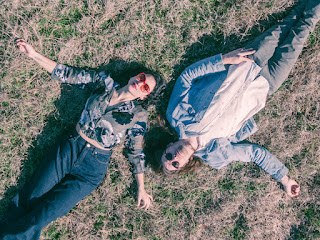 Cicada Rhythm - Do I Deserve It Yet?

Background - Three years since their self-titled debut, Athens, GA-based indie folk band Cicada Rhythm has announced a new album, Everywhere I Go, due out April 27, 2018 via New West Records. With a tracklist that blends orchestral folk-pop and ramshackle roots-rock in equal numbers, Everywhere I Go is a “patchwork album” tracked in recording studios, living rooms, and gospel churches throughout Tennessee and Georgia. Bandmates Andrea DeMarcus and Dave Kirslis have upsized their sound considerably for the record, with new members expanding their once duo to a full touring band and a louder set of influences propelling them forward sonically.

Assisting in that forward propulsion was production by Kenneth Pattengale, spellbinding guitarist and harmony vocalist of the Milk Carton Kids, and Oliver Wood, best known as the lead singer and guitarist for The Wood Brothers. “Armed with equally robust amounts of individuality and talent, Cicada Rhythm spin yarns of sound we haven’t heard before,” says Pattengale. “And aren’t we the better to glimpse their personal reverie?” Like interstate poets, DeMarcus and Kirslis sing about the country unfolding outside their car window at highway speed, spinning stories not only about the places they visit, but personal and social struggles as well.

Cicada Rhythm will be bringing their new songs and full-band arrangement to clubs and festivals throughout the Southern United States, beginning with an appearance of Savannah Stopover on March 9. They will support Lilly Hiatt in Dallas, TX on March 13 before heading to Austin, TX for multiple performances at SXSW. Cicada Rhythm’s April/May headlining tour will include a stop at North Carolina’s Merlefest and a hometown show in Athens, GA, as well as bring them to Nashville, Chattanooga, Knoxville, Asheville, Atlanta, and more. Please see below for full tour details with more to be announced soon. WEBSITE, FACEBOOK.

'Do I Deserve It Yet?' is a mixture of folk, roots, blues and rock all wrapped up into one sparkling and hook laden song. The vocals are splendid, the music dynamic and natural, this is one big tease for the forthcoming album. 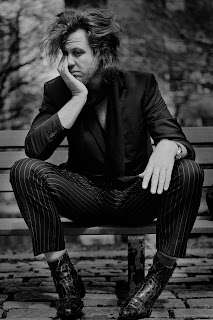 Background - Jack Ladder & The Dreamlanders return with a first taste from their forthcoming album ‘Blue Poles’, the first new music since the May 2017 single “Susan”.  “White Flag” is an unlikely love song about surrendering to a prison that binds two people together. In the music video we find him in Indonesia, struggling with a special kind of captivity. “It’s written from two perspectives”, says Ladder. “I didn’t want to duet so I sang both parts. It allows for more mystery.” The video and the forthcoming album maintain the recurring bone dry sense of humour that has been a thread through all of his work.

“I’ve got no fingers left to cross, each time I leave you cut one off.”

Blue Poles will be the fifth album from one of the most singular characters in Australian music. Sentimental and mournful, sardonic and surreal. Jack Ladder brings that towering and tender baritone to bear on tales of beauty, love, hope and redemption. A master of musical narrative, he conjures lyrics that celebrate the absurdity and sincerity of the human condition in songs that groove in subtle ways.

Burke Reid produced Hurtsville (2011), Kim Moyes shaped Playmates (2014), but this time Jack Ladder takes total control of his creative process.  “Blue Poles is the most melodic thing I’ve ever done”, he reflects. “I really pushed myself into some uncomfortable places.”

Blue Poles was recorded at Oceanic Studios in Sydney, engineered by Tim Whitten (The Necks, The Church, The Go-Betweens) and mixed in Los Angeles by Noah Georgeson (Devendra Banhart, Joanna Newsom). Once again he’s joined by The Dreamlanders, Australia’s very own misfit supergroup made up of Donny Benet on bass, Laurence Pike on drums and this time two guitarists - Kirin J Callinan and Ben Hauptmann. WEBSITE.

The musical arrangement is understated as 'White Flag' opens allowing Jack Ladder's definitive vocals to enchant the listener in moments. If that isn't enough the musical landscape broadens, the melodic vibes entice even more, this is one fabulous song. 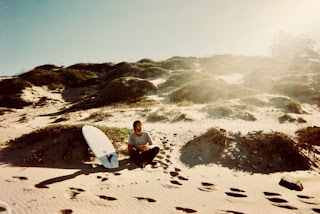 Background - Singer-songwriter and multi-instrumentalist Kip Nelson makes his debut with his carefree single, "Mexico."  Hailing from the beach town of Santa Barbara, Kip embellishes his slacker-rock style with twinges of psychedelia and lo-fi pop that will transport you to a desert festival dream-state.

Kip comes from a background of playing shows and touring around the reggae scene with Santa Barbara-based band The Olés. The Olés have toured across the U.S. and played festivals with artists like Damian Marley, Don Carlos, and Rebelution. The Olés played regularly in Isla Vista California, the UC Santa Barbara college town, and have been active in the California reggae circuit over the last few years.

Debut album, Waves After Work could be considered a ‘side project’ or a solo recording experiment for Kip. His debut solo album puts the limits of basic home recording to the test. Tracks came together one piece at a time over months of tracking all drums, guitars, synths, and vocals through a Tascam studio cassette player picked up at the local Goodwill. As a local beach sheik once said, “Hearing ‘Waves After Work’ on the loudspeakers sounds like the sonic equivalent of an Indian Summer Santa Barbara Santa Ana breeze gently slapping you in the face”.

Lyrically, Kip toys with themes of escapism throughout the record. Waves After Work is about taking a step away from the monotony of day to day routine. The album name eludes to how, in society, work comes before play. For Kip the after work reward is anything and all things waves, recording sound waves or riding ocean waves. The music is thematically based on dreaming, escaping, surrealism, and freedom of the open spaces. Waves After Work will be available worldwide April 27th, 2018. FACEBOOK.

A swirling bass line opens 'Mexico' and builds in style from there. The contrasting vocal styles are superb and the music imaginative and massively catchy. Debut's of this standard set the bar high, I have a feeling that's not going to be an issue for Kip Nelson.