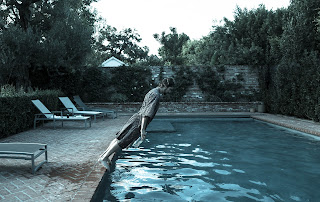 Background - Benjamin Jaffe announced today the release his solo debut album Oh, Wild Ocean of Love on May 11th via Diamond Family Records. Best known as one-half of the acclaimed Americana duo Honeyhoney, Jaffe steps into the spotlight with his debut and reveals his ingenuity as a guitar virtuoso, multi-instrumentalist, writer, composer, and arranger. Along with the announcement, Jaffe released his new song titled "Susan The Cat," a sweeping folk ballad inspired by an odd roommate.

Trading the rootsy stomp of Honeyhoney's three albums for an indie-alternative sound, Jaffe widens his approach with Oh, Wild Ocean of Love. These songs make room for a broad range of influences, from the polyphonic rhythms and improvisational freedom of jazz music to the soul and swagger of Motown. There are R&B ballads like "Everlasting Peace," where Jaffe layers his voice into gorgeous stacks of multi-part harmony, and dissonant rockers like "Blooming," where he shines a light on his skills as an inventive electric guitarist. Throughout the tracklist, Jaffe plays nearly every instrument himself, bouncing between drums, keyboard, bass, and guitar.

Inspired by a wide range of sounds and texts - including Paul Simon, Beck, Randy Newman, and The Essential Chuang Tzu - Oh, Wild Ocean of Love explores the wreckage left by a relationship that's poorly-defined and headed south. It's an album about the full spectrum of love: love for yourself, for others, and even your maker. An album about lessons learned. An album about the realization that even in these chaotic times, it's okay to relax. WEBSITE, FACEBOOK.

'Susan The Cat' is a beautiful folk ballad that is awash with atmospheric feeling, both musically and with the vocals of Benjamin Jaffe. The production is sublime, allowing all elements to stand out and shine, the album just begs to be heard. 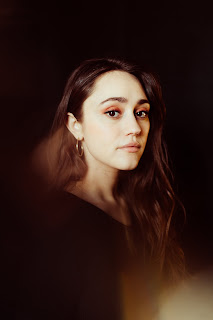 Ellie Schmidly - Where To Begin.

"When I first started working at music, it was hard for me to sit down and write or sing because it required me to ask questions of myself and to be vulnerable," recalls Ellie Schmidly. "It forced me to knock down some scaffolding in my own personal construction of how things are to be, and I wasn’t good at that practice yet. It was work and uncomfortable, and it was easier to not do the work, but then I would still feel this deep nagging need to express some big feelings I had ignored within myself – I was conflicted. There is a sort of parade that happens in the song, a big instrumental break with cheering, and it reminds me that doing the hard work of looking inwardly at ourselves is a small victory.”

Peacock was so taken with her Springfield, MO house show performance that he reached out to her the very next day to introduce himself. Peacock invited Ellie to Nashville to partake in songwriting sessions and introduced her to those in the community that could help cultivate her music. She says Charlie’s encouragement was life-changing. It turned out to be literally life-changing because she left her home, friends, family, and school in Missouri where she was studying public policy, to make the move to Nashville.

On Blossom & Bone she collaborated with accomplished producers, arrangers, and engineers within Nashville. Todd Gummerman (guitarist for MuteMath) produced the EP and arranged many of the string parts heard on Blossom & Bone. Jeremy Larson (member of Violents), Composer Jordan Critz, and Darren King (drummer for MuteMath) all played, co-wrote, or arranged strings on this EP. With the encouragement of her supportive Nashville community, Ellie Schmidly is ready to begin. WEBSITE, FACEBOOK.

Ellie Schmidly's vocals are personable and charming on  'Where To Begin' a song that mixes some gentle melodic moments with more powerful and dramatic interludes. The music builds into something quite special and unexpected, but for me, it's the vocals that ensure a second listen. 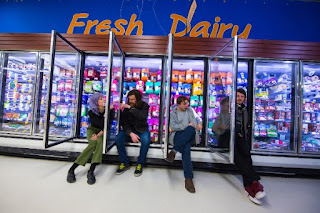 Background - Clever Girls have just premiered their new video for "Loom" via New Noise Magazine. Taken from their upcoming release, Luck, the album will be out on April 2, 2018, with a release show on April 5 at ArtsRiot in Burlington, Vermont.

Late at night, perhaps after Clever Girls' frontwoman Diane Jean has finished digging through dead people’s stuff, you may find her writing. Between running a vintage store and a handful of other odd jobs, Diane founded Clever Girls- a quartet formed in the drunken droves of Burlington, Vermont that creates sorrowful “confused rock.” With a knack for getting into trouble, the grunge pop four-piece is known for their unfiltered emotional deliveries, if not just for their accidental profanity.

Above all, Clever Girls as a group will elicit the same emotion and nostalgia that Diane Jean seeks to find in her day job; the music will live somewhere between straight forward rock and roll of bygone eras and dusty, moth-eaten grunge pop. Clever Girls Luck is out April 2 on all major platforms. WEBSITE, FACEBOOK.

'Loom' starts out with a bass line and enticing vocals and then builds layer by layer into a classy alt rocker. An underlying level of emotion alongside some melodic hooks gives the song some real edge, another album that's firmly on our radar.