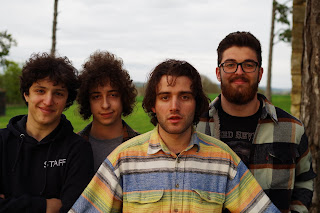 Background - Johnny Mafia have long been high rollers in the burgeoning post-garage punk rackets gripping the country of France over the last few years; high-energy explosive acts like The Scaners, Escobar, Les Grys Grys, Les Lullies and The Arrogants have been burning up stages across Europe and USA with a vengeance, adding their craft to the long list of fine French exports suited to the more cultivated of music connoisseur.

The group hail from Sens, Burgundy (which is known more for it’s wheat and cereal production than rock ‘n’ roll) and bring a young, snotty, explosive and ferociously fun energy that drives audiences into a near-frenzy. Inspired by classics like The Ramones, T-Rex, and The Clash, they also draw heavily on contemporary acts like Ty Segall, Jay Reatard, and the Wavves.

With their signature reverb-soaked slap-back fuzzed out sonic attack, Johnny Mafia embodies punk attitudes and spirit of past and present with a firm foothold into their bright future as a young band ready to conquer the wider world of rock ‘n’ roll.

Johnny Mafia have established their reputation above all else on stage and over the last four years, the band have been a featured attraction across festivals in France; Festival Printemps de Bourges (FR) in 2014 and Festival Les Eurockéennes de Belfort (FR) in 2016 and were recognised with a laureat du FAIR in 2017.The band have just released the video single for “Big Brawl” after recently finishing recording and mastering their sophomore album with producer Jim Diamond and will release "Princes de l'Amour" Nov 9 on London's Dirty Water Records on vinyl/CD/cassette and have a tour of the US and Canada in the works. FACEBOOK.

If your up for a 'Big Brawl' you might wanna think twice with Johnny Mafia. I'm just going by the excess of show biz artificial blood in the video, so if that's not for you, the audio remains a feisty blast garage punk, in all it's glory rather than gory.... 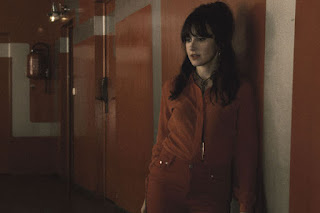 Says Stein of the song, “Easy Street was written very immediately. Everything about it felt intuitive and direct. Touring the songs off [her 2017 solo debut] ’America’ for the last couple years has given some unique insight into people and their situations. You’re clocking up some good miles across various cities and countries, you see people getting by, doing what they can, being inventive with their realities. Hope/desperation isn’t limited to geography, everyone’s looking for an easy way out essentially. This song is about someone running from their reality and trying to find a better life for themselves.”

Juanita Stein’s second solo album arrives less than a year after her first, ‘America’, saw her exploring the iconography and cultural landscapes of a country that had always fascinated her from afar. Yet, while ’Until The Lights Fade’ is cut from the same musical cloth as its predecessor - the crepuscular twang of bar-room guitars, the keening romanticism of its melodies, the sparseness and simplicity of its arrangements - the album’s ten songs are concerned with thoughts, feelings, stories and characters rooted far closer to home.

“I feel like the two albums are different sides of the same coin,” Stein explains. “If ‘America’ was the starting point of a journey - the musical equivalent of me spreading my wings, but also treading carefully, trying to figure myself out having come from such an intense period of camaraderie in the band - then this record is me starting to gain a bit more traction, feeling more confident in where I’m coming from and what it is I’m doing.” WEBSITE.

Following on from our April feature for 'Forgiver' Juanita Stein makes her fifth appearance on Beehive Candy with 'Easy Street' another delicious and sophisticated rocker that doubles up as a fine teaser for her next album due at the end of August. 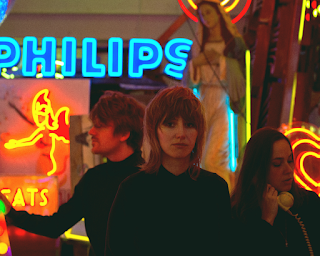 Everything by Electricity - Place To Call My Own.

Background - Fronted and written by Yulia, who grew up in post-Soviet Siberia in the 90s, the track mirrors dark memories of exile and alienation. She tells us how she was “blacklisted” with behavioural problems amongst peers involved in crime and hard drugs at school for as much as playing electric guitar and sporting a Kurt Cobain hoodie. The track explores “escape” and finding solace in London to freely express herself.

The outfit, who have gained UK radio support from the likes of BBC Introducing, Radio X and more, merge digitalised haziness over a beating mechanical heart of euphoric instrumentation. Their sound is littered with strains of alienation in the form of bittersweet synthesisers and whiteout lyricism stirred from lead-vocalist Yulia’s Siberian upbringing. In their live line-up the three-piece also features Daniel (bass guitar, synthesisers) and Manoela (drums, pads).

Everything by Electricity now release their new single Place To Call My Own. Opening with skipping percussion, we’re led into blizzard-like arrangements that progressively form into shadows of melodies, remaining ever-modest yet central in the 7-minute mix. EbE escape clichés of atypical synth/dream-pop outfits, consequential of anchoring Yulia’s vocals deep in the composition with its instrumental counterparts. The result is a machine of sound, perhaps similar to early Crystal Castles with their gelled emotive electronica, yet carried with more subtlety.

Yulia on growing up in post-Soviet Siberia: “I was growing up in Siberia in the post soviet era in the 90s. I was 9 when I started my first band with school mates – this was a huge problem back then. Being in a band was considered to be a waste of time and in some cases as bad as taking drugs, especially for a girl, I didn’t fit in at all. My school had a “black list” for troubled kids with serious behavioural problems (those who were taking drugs or involved in any crime) and my parents received a phone call one day from a school principal advising them that I was included in that list just because I played an electric guitar in a band and wore a Kurt Cobain hoodie, it was totally unacceptable and I nearly got kicked out. WEBSITE.

Layer upon layer of refined synths and a gently paced beat give 'Place To Call My Own' a lush feel before the vocals begin. When they do, the melody and sweeping vibes of dream pop make this one outstanding and fabulous song, that just short of eight minutes duration, still had me wanting another listen straight after. 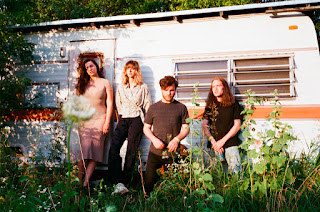 Vallens - If I Don’t Know You.

Background - Once toted as “a band you need to listen to” by Bust Magazine, Vallens are an undefinable quartet drawing from Abba, This Mortal Coil, film, and more influences than one would expect of their vexing and fervid sound.

With Dimmed In My Display EP set to be released early summer and their second full length album readying in the shadows, Vallens songwriting has expanded since their debut album, Consent, to the full band, including Colin J. Morgan (Cellphone), Marta Cikojevic (TOPS), and Devon Henderson (who additionally produced the EP). While thematically the EP reflects upon obscurity, explores isolation, and confronts the flood of social imagery, sonically Vallens newest material is “dark, heavy exercises in frenetic tension building.

Vallens play shows often and have been reshaping to become a more hypnotic and groove based project, leaning more on their melodic influencers, while still maintaining their dissonant unease. Often referred to as shoe-gaze, or any hashtag involving David Lynch, Vallens are now looking to explore many other topics, whether it be in subject, genre or concept — growing from these descriptors into a multifaceted unit and evolving into a whole different animal. Dimmed In My Display EP out July 6th, 2018 via Hand Drawn Dracula. FACEBOOK.

Pretty much two years to the day since we first (and last) featured Vallens I am reminded of what an enticing band they are. 'If I Don’t Know You' slowly unfolds from a gentle piano lead start into a powerful energised rocker, with the bands shoegaze sensibilities intact as they add even more drama to the song. The EP is eagerly awaited.