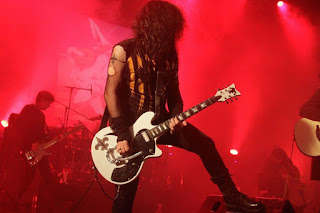 Background - LA-based Beauty in Chaos has announced the debut album ‘Finding Beauty in Chaos’. Born of frustration and creativity, this is an audio assemblage curated by LA-based guitarist Michael Ciravolo and produced by Michael Rozon. This colossal work is previewed by the lead single ‘Storm’ featuring Ashton Nyte (The Awakening, MGT).

“I look at this as an evolving entity that I am the ‘curator’. For this album, ‘Finding Beauty in Chaos’, I am the only guitarist and no keyboards are used, but you will hear loads of textures created from guitars and effect pedals. This is a convergence of textures and styles that I envisioned blossoming,” says Michael Ciravolo.

"Assembling, or in some cases, disassembling beautiful soundscapes, melodies and chords, while injecting harsh bursts of sonics … or visa versa.  Light in the dark, dark in the light is the contrast that helps in realizing the goal of creating something musical that is also very visual and cinematic."

Originally from New Orleans and now based in Los Angeles, Michael Ciravolo has played guitar in Human Drama for the past 30 years, most recently on ‘Broken Songs for Broken People’ (2017). Perhaps best known as President of Schecter Guitar Research, he has also played live and recorded with Michael Ashton’s Gene Loves Jezebel since 1998, along with Tish Ciravolo (wife and founder of Daisy Rock Guitars).

The lead track 'Storm' was co-written with and features vocals by Ashton Nyte, who also collaborates on another two tracks on this album. This, like many of the tracks on this album, features layers of alternative rock bliss, crowned by powerful and penetrating vocals. WEBSITE.

'Storm' is a vibrant alt rocker where Ashton Nyte's vocals and the lyrics add a timeless goth dimension. Musically tight and polished the guitar adds some melody, and as a first taste for the debut album, this really is impressive. Considering the cast of characters mentioned above that are also involved, anticipation is set very high. 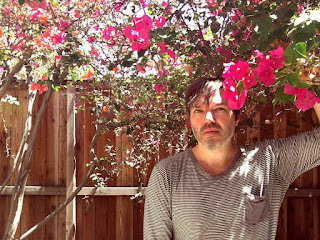 Background - Papercuts announces its sixth LP overall and first for Slumberland, Parallel Universe Blues, due Oct. The video for the album's first single, "Laughing Man" is up now and the band launches an east coast tour opening for longtime pals and collaborators Beach House.

Since emerging in San Francisco's fertile early-00s indie/folk scene, Papercuts' Jason Quever has released 5 stellar albums that have become touchstones of quality modern pop. Equally at home with lush, baroque textures and more stripped-down arrangements, Quever's song-writing is always top notch, the production tailored to the songs with great sensitivity. His skill in the studio has helped him build-up an enviable resumé recording, producing and playing with artists including Luna, Beach House, Cass McCombs, Dean Wareham/Dean & Britta and Slumberland's own The Mantles. His sonic influence is clearly in evidence on those recordings, but it's on the Papercuts albums that we hear Quever up close and his most personal.

Papercuts' new album Parallel Universe Blues reflects Quever's recent move from long-time musical home San Francisco to Los Angeles and all of the searching and self-exploration that accompanies leaving your home, your friends and your scene. The sound is intimate and close, nicely balancing the sonic concerns of the last few Papercuts records. Album opener "Mattress On The Floor" is an Eno-tinged amuse bouche, droning and a bit mysterious. Next song and first single "Laughing Man" is a lovely slice of classic pop -- widescreen but not at all melodramatic, an impressionistic "love song, but maybe more about fragmented memory and fleeting attachments." Taken together, that opening pair sets the table for the rest of the album: perfect Spectorian pop songs echoed down through Lou Adler, Harry Nilsson, The Velvet Underground, LA's Paisley Underground, Spiritualized and The Jesus and Mary Chain. TWITTER. 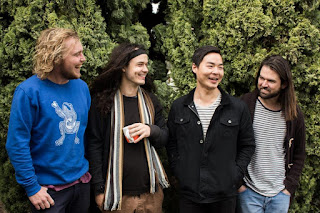 The Peppermint Club - Passing Through Your World.

Background - The Peppermint Club set to launch debut self-titled album; share new single 'Passing Through Your World'. The Peppermint Club's debut album is a masterwork of pastel-hued pop. Heartfelt and dreamy, each song is an intricately constructed soundscape – threading lush, airy vocals through a textured fabric of ethereal, neo-psychedelic rock. From its uplifting opener All Together On The Sun, through to its stunning Harrison-esque finale and current single Passing Through Your World, the album is as much a journey as it is a collection of songs.

Formed in Perth by Chris Chen (ex-Rainy Day Women) The Peppermint Club has evolved from an aspiring studio project into a formidable band. Their first single Everything Is Changing was awash in breezy vocal harmonies and a genuine, almost-nostalgic emotion. In an instant, The Peppermint Club established themselves as something far beyond a typical new band, picking up national airplay while creating one of the most ambitious debut albums of recent years.

Produced by Chris Chen and accomplished multi-instrumentalist Daniel Henry, the album is meticulously put together. Each song is not just a passing moment but a foundational brick in the greatness of the album; powerful on its own, yet inherently linked to the record as a whole. There are gentle ups and downs, but an overall steadiness and confidence that bears the unmistakable mark of sincerity. These songs have clearly come from someone's soul. WEBSITE.

Whilst it is easy just to reference the psychedelic characteristics of  'Passing Through Your World' which are gorgeous within themselves, the song has more to it than that. Gentle and refined, it merges pop and rock together along with a fine helping of nostalgic vibes from the music of yesteryear. 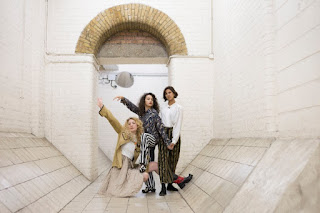 Background - Pioneers of a genre called ‘Trip Jam’, which fuses elements of Latin, funk, psychedelia, soul and hip hop music, Peluché are a troupe of intrepid troubadours whose freewheeling artistry already has them pegged them as a standout force in London’s rapidly diversifying sound. The trio have shared brand new single ‘Figure Me Out’ and announced their debut album ‘Unforgettable’, to be released on One Little Indian on September 28th. The album is already shaping to be one of the most distinct and vital British sounds of 2018.

Speaking about the track, Peluché said: “Figure Me Out was recorded straight to tape in the second take, and it was one of the first recordings we did for the album. Putting it straight to tape also brought out a kind of 70s warmth of the instruments, with the Rhodes, bass guitar and drums driving the song forward with a momentum. We felt like we had discovered a new groove in this song, something that day brought it out of us as we played.”

All self-taught musicians, they formed in 2014 through a beautiful stranger in a customer service encounter and quickly formed a strong musical bond through their love of jamming. Peluché jam in their self-built studio space in a garden shed, and always record the foundations of tracks live. Their live shows are partially improvised, drawing the audience into their unusual world. Their live video series, The Shed Sessions, shows an insight into this musical realm and have allowed the band to share new music and visuals directly to their fans.

Slippery Latin bass grooves, subtle instrumental flourishes, funk breakdowns, and a touch of magical lyricism a la Kate Bush or Cocteau Twins makes for an unforgettable sonic journey into the tinderbox chemistry of a group with a collective and deeply personal musical vision. Their obsessive and borderless consumption of wildly divergent styles has helped them to arrive at exactly where they need to be. Peluché have created a demand for music that only they can create, and that’s a surer sign of longevity than most bands with triple their experience could claim. TWITTER.

We featured 'To Be A Bird' back in June and 'Figure Me Out' makes for a welcome follow up. The driving musical pace and slightly slower and somewhat ethereal vocals, come together in harmony as once again the trios trip jam style works wonders. 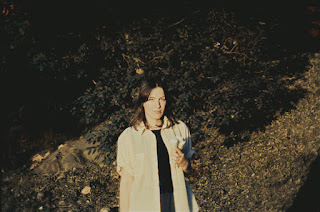 Background - Swedish artist Many Voices Speak has announced the release of her debut album 'Tank Town' on 31 August via Strangers Candy. Following the release of first singles 'Necessaries' and 'I Saw You', Many Voices Speak has now shared new track 'Chances'. Of the track, Matilda says: "Chances is a reminder to myself that being a misfit’s just a sign that you’re too far from the place where you feel at home. It’s been important for me to remember that place always exists somewhere, so the will to change won’t win”.

Featuring the dreamy singing and songwriting of Matilda Mård, Many Voices Speak was born out of Mård's move from Stockholm to the smaller Swedish industrial town of Borlänge. Less distraction gave way to creative rejuvenation and a revitalized approach to music.

Mård found liberation in one of the Borlänge more unlikely places — the karaoke bar. It became a “free zone” for her, she says, “far away from my own self doubts and prestige about music.” After piling songs for years without ever releasing anything, she was relieved of the pressure she felt towards her own creations and began again as Many Voices Speak.

Her debut EP Away for All Time was released in 2016 and received early attention online with its nostalgic lead single "Video Child" and an airy cover of Rodgers and Hartz's classic "Blue Moon," garnering support from Spotify, Stereogum, Noisey, WNYC, Idolator and more, while landing Many Voices Speak highly on the Hype Machine charts and a poignant placement in Riverdale, and more recently on newly launched Netflix film "All The Boys I've Loved Before". TWITTER.

More modern musical techniques are merged with classic pop sensibilities as 'Chances' charms it's way under my skin with splendid layers of emotive hooks.