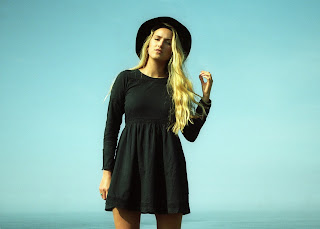 Background - Frankie Davies has shared the new video for her latest single 'High On Love' which sees Frankie meandering home ‘the morning after’ around her local streets with the gorgeous landscape of Jersey as a backdrop.

“Wherever I Go is me, encapsulated,” says Frankie Davies, Jersey-born songwriter, on her highly anticipated debut album. This is an important release for Davies, in fact, she has said that “this represents me, my journey and experiences over the last 4 years.” First single, 'High On Love', is a brilliantly addictive tune that showcases Frankie's exceptional songwriting and heartwarming voice.

Frankie has explained the story within the song: "High on Love is an unusual take on a love story, one that follows an optimist with the ability to conjure up a connection that wasn’t there in the first place. By misreading gestures of kindness for ones of affection, we see just how easy it is to run away with our ideas of love. Being high on that ideal blurs the lines of what is real and masks the truth."

2018 marks an important step in her story, the release of ‘Wherever I Go’, Davies’ debut album on the 2nd of November, something fans have been waiting to hear for a long time. Its variety of influences are tied together by Davies’ evocative vocals and addictive melodies that transport listeners through both painful and joyful moments in her life. WEBSITE.

'High On Love' is a charming and lovable song that is now accompanied by a equally pleasing video, as Frankie Davies teases her fans once more ahead of the anticipated debut album due in just over a couple of weeks. 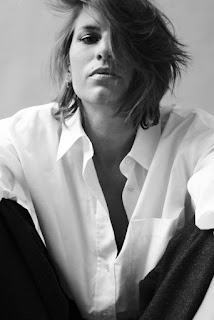 Background - Dutch musician and singer song-writer Sofie Winterson has announced the release of her sophomore album 'Sophia Electric' on 02 November via Excelsior Recordings.

Following the release of first single 'Military Man', Sofie has now shared another track taken from her upcoming album, and a beautifully intimate video to accompany it. 'Half Asleep' "is about holding back out of fear. When you listen to the lyrics, you’ll know what I mean by this.", Sofie says. "The video is directed and shot by photographer Laura Kampman. We were roommates in LA and she shot this video in and around our house. We became good friends and it was special to shoot this video together, since it’s a personal song and it felt natural to let her literally come as close as she does in the video".

Sofie grew up in a house full of music on a small peninsula in the Netherlands called ‘Marken’, just outside of Amsterdam. From a very young age, her father had all four children singing together and, later on, he even formed a band with them and toured in the Netherlands and Indonesia, where he was stationed as a doctor on the Maluku Islands. Her parents always thought that music was an important part of life, but didn't expect all four children would have ended up being musicians. Sofie's sister and brother are in a band called ‘My Baby’ and her older sister is in a band called ‘Blue Crime’. Her whole youth was filled with music and she drew a lot of inspiration from 70’s folk artists as well as soul legends. For her own music, and the latest project in particular, she returned to the folk.

Her new album 'Sophia Electric' is a personal document about love, letting go, change and memory. The music was written and recorded in different locations, namely Los Angeles, Lisbon, Haarlem and Amsterdam, but her guitar was always within reach.

The initial spark that lit the creative fire came when DJ Turquoise Wisdom introduced Winterson to a couple of obscure folk singles during a session on Red Light Radio that she attended. This prompted her to go back to her old love of writing songs in their bare essence on guitar. When she spotted a record player's amplylier saying 'Sophia Electric' on it, she put two and two together. She consumed a lot of music along the way; the deft experimentalism of Arthur Russell, the bare-boned songwriting approach of Big Thief and Elliott Smith, the lush, nocturnal atmospherics of Beach House and Mazzy Star… and yes, the commanding pop aura of Beyoncé too. This confluence of different beats was forged into a singular vision. TWITTER.

The musical backdrop has an intricate and detailed rhythmic feel on 'Half Asleep' whilst Sophie Winterson's vocals have an intimate and personal feel that combine to provide a quite addictive song. 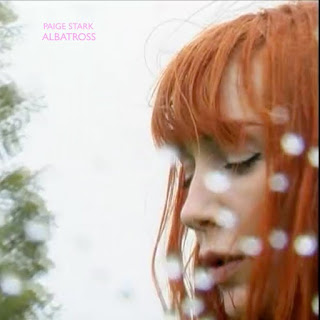 She has released records with her band Tashaki Miyaki & contributed production to fellow Angelenos L.A. Witch & Cherry Glazzerr as well as her own band, Tashaki Miyaki.

This is her debut solo effort. It was recorded by Grammy winning engineer Cassidy Turbin (Beck) with contributions by Jon Brion.

"among the most lovely pieces of music that I’ve heard so far this year. I wish we didn’t have to wait until at least Spring of 2019 for the full album, but I suppose that does make the saying about the best things in life being worth the wait ring truer than ever." - Marion Hodges, KCRW. BANDCAMP.

In the early months of last year we featured Tashaki Miyaki three times and were very impressed with their music. Now we have Paige Stark's debut solo piece 'Albatross' which as expected has her gentle melodic and tender vocals. The musical arrangement is subtly matched and those hooks are everywhere on this wonderful song.