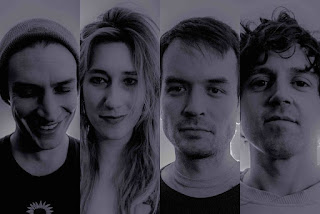 Background - Chicago punk band Lifestyles take aim at Scientology on their ripping new single “Wail” that came out late last week. It’s out digitally now ahead of its physical release on 10/26 as part of a split 7” EP with Meat Wave, which their fellow Chicagoans No Trend Records is releasing on October 26th.

The lyrics behind "Wail" came out of Lifestyles' endless obsession with cults and in this case specifically, Scientology. It's about how any written contract among friends or practitioners of a shared belief is inherently a negative and suspicious thing - if one requires a signed contract to prove trust, then that person is clearly indicating they have no trust.

It's also one of Lifestyles' faster songs, with the band dedicating it to the memory of Hüsker Dü’s Grant Hart. Lifestyles' sound is reminiscent of the grungy noise that was blasting its way out of the Puget Sound in the late 80’s and early 90’s... and while often compared to bands like Babes In Toyland, the Wipers and the Misfits, Lifestyles has had no problem implementing experimental song structures and otherworldly vocals in an attempt to carve out their own unique sound. They’re currently working on the follow-up to their self-titled debut album (available exclusively on Bandcamp), which they’ll soon be recording at Electrical Audio. BANDCAMP.


'Wail' by name and wail by nature, this song let's rip with some full on punk fuelled attitude right from the word go. The tonsil shattering vocals are one of a kind, the band roar along and at just over two minutes duration, that pretty much every pure punk box ticked. 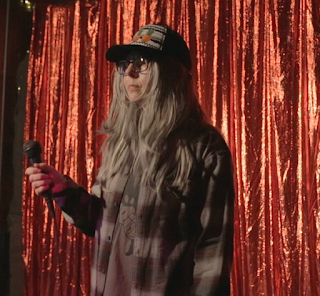 Background - Ahead of her forthcoming UK tour, Amy Rigby will be releasing her first solo album in a dozen years, The Old Guys, in the UK on 30 November.

Amy explains more about the track: "Tom Petty is a guardian angel for me, like he was and is for many musicians. I’ve written about him on my blog a lot because anytime I’m on the road it’s like Tom is there on my shoulder, saying “that’s cool” or “you can do better”. This was true when he was alive and even more now that he’s gone.

After another week of discord and divisiveness in the news, I saw a video of J Mascis singing Don’t Do Me Like That in a nearly-empty karaoke bar. I’d sung American Girl with Chuck Prophet and the Mission Express the night before and felt the power of that song reach out and lift people up. Mascis’ karaoke performance was the opposite, it was internal, like prayer. He wasn’t doing it for an audience, he was doing it for himself. I imagined I was J, strummed some American Girl chords and wrote this song."

We shared 'From Philiproth' from Amy Rigby just four weeks ago and are mighty pleased to follow that up with 'Tom Petty Karaoke'. There is a sense of real passion from the opening moments, the lyrics are wonderful and the hooks are everywhere. 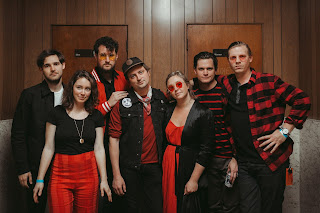 Background - Austin, TX's Wild Child are excited to announce their first run of tour dates in 2019, making stops in Denver, Seattle, Portland, Los Angeles and many more. This follows a winter tour this November & December which will hit New York, Philadelphia and more. Find a full list of tour dates below and via the band's website.

In anticipation of the upcoming fall tour, the band released a one-of-a-kind video for the song "My Town" from their new album Expectations out now on Dualtone Records. Director Aaron Brown achieved a truly unique miniature effect by utilizing two drones: one with a massive spotlight attached to it and the other with a camera. The result is a chilling, "Westworld"-like environment that climaxes with a burning building.

"At the end of last year, we got a small crew of people together to go spend some time out in Teralingua, TX, just shy of the Mexican boarder. It’s surreal out there, beautiful and desolate; West Texas in a nutshell," explains co-frontman Alexander Beggins. "Our director Aaron Brown has a little ranch house out there that we camped out in for a few days but spent most of our time exploring the desert land and were fortunate enough to be allowed to film into some of the towns best kept little secret spots. The entire video really captures a moment in time in our lives"

"This song is one of my favorites from the album. It was very emotional to write and hear come to life in the studio, and it feels even more powerful with the backdrop of the Texas desert behind it," said co-frontwoman Kelsey Wilson. "'My Town was' written from a very dark and isolated place and singing it in a ghost town in West Texas felt hauntingly appropriate. We all had a lot of powerful moments out there together." WEBSITE.

Wild Child made a couple of appearances on Beehive Candy around the beginning of the year and the new video for 'My Town' makes for a very welcome return. Slow paced, melodic and with a beautiful atmosphere both the song and the accompanying video are gorgeous. 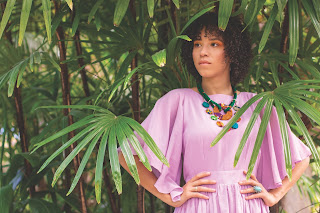 Known for her prowess as a songwriter and tradition bearer who performs with “the skill of a folk-circuit veteran” (Rolling Stone), Grenadian-Canadian artist Kaia Kater took a decidedly different direction for her new album, Grenades. What started out as a search to discover the roots of her identity became a physical and emotional exploration of history, in particular her paternal ancestry, and has led to bold new heights of imagination and creative expression.

Her father Deno grew up in Grenada, fleeing to Canada in 1986 as part young speakers program, after the U.S. invasion. His voice can be heard recounting those events during the album's interludes — a way for the Canadian songwriter to tie her present with his past, in order to understand our current global climate of war, unease, immigration, and displacement. Kater revisits the past in songs like “La Misère” and “Grenades”; touches on the present in “Canyonland” and “New Colossus”; and looks to the future in “Poets Be Buried.”

As Kater explored multiple facets of her identity, so did she explore varying facets of her sound. She partnered with producer Erin Costelo to create a musical aesthetic that pulled from more than just the Appalachian influences of her past musical efforts. Artists like Aoife O'Donovan and Daniel Lanois figured prominently in the artistic vision.

“I play acoustic guitar on the record, and the title track doesn’t have banjo in it, so we knew it would be different right off the bat,” Kater says. “We anchored a lot of the sound with guitar player Christine Bougie (Bahamas, Good Lovelies). I knew I wanted Christine on the record, and we built the sound from there.”

It’s a sound that starts in Grenada, moves through America, and travels into Quebec. It’s the sound of an artist forging a new path into the future, while holding her history close. Grenades tells stories of courage and uncertainty; it is an odyssey reflecting on the nature of personal identity, memory, family — and how sometimes a person must travel across the world to find out where their home is. WEBSITE.

'New Colossus' is a beautiful, timeless folk song with just a twist of Americana feeling. Subtle alterations in pace have considerable impact, the musicianship is pristine and the vocals of Kaia Kater are enchanting. It may be a couple of months wait for the album, this song suggests it will be worth the patience.